In early August, PowerReviews, a company that, yes, powers product review functionality for e-commerce sites, will launch a self-service platform that will enable e-merchants of any size to add reviews to their sites with a few lines of code.

Up until now, the company’s offering has required a somewhat sophisticated integration that was beyond the technical and financial reach of small and medium-sized merchants — the $500K+ in revenue, Yahoo Stores and their ilk. Now, with a simple wizard that functions essentially like AdSense, these merchants will be able to have product reviews running on their sites in a couple of hours. PowerReviews will charge around $100 per month to host the data and manually moderate every review that comes in.

The company, which currently has a customer base of 2500 large e-commerce sites, intended to launch its new platform at a later date, but today was just one of those days. As PowerReviews prepared for the release, a misguided but not ill-meaning tech copywriter contracted to write the documentation slipped up and posted all the information about it on his blog. Shortly after, Andrew Chen, PowerReviews’ CEO, reached out to us to fill us in. 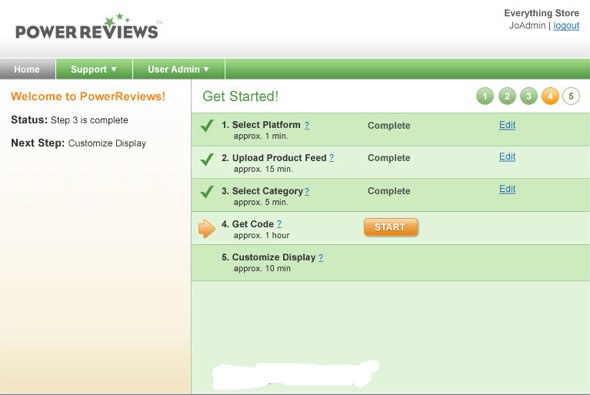 In the product-review-for-your-site market, there are two main players with different models. BazaarVoice is the other one. That company, which raised $9 million last Fall, charges a few thousand dollars for a monthly subscription. PowerReviews, which raised $15 million around the same time, gives its services to big e-commerce sites for free but these sites agree to share the resulting data with PowerReviews for its own product review destination site, Buzzillions, in exchange.

Shoppers visit Buzzillions to get product reviews on everything from office supplies to sex toys and PowerReviews gets a piece when these consumers click to merchants’ sites and make purchases. CEO Andrew Chen claims that traffic to merchants from Buzzillions currently converts into purchases two-to-three times more successfully than do the shopping search engines Pricegrabber and Shopping.com.

Chen says that the subscription money PowerReviews will charge smaller sites is mainly to cover costs. The goal is distribution: Buzzillions truly wants to be a one-stop shop for product reviews on absolutely anything. With 2.5 million products reviewed, up from around 250,000 last year, the company is clearly making strides towards this end.

Now, all it needs is a few dozen million more.

[Update: The original post said that Buzzillions drives more traffic to merchants than the shopping search engines. This is not the case. Buzzillions’ traffic just converts into purchases at a significantly higher percentage.]