Today, natural language search engine Powerset is finally opening its doors to everyone, as well as unveiling a set of tools that have previously been seen by only a handful of people. This marks the end of a long phase for Powerset — since we first outed the stealth-mode company in 2006, it has kept its product under wraps for over a year and a half.

Powerset is, at the moment, essentially a search technology that has been developed into a set of tools that help dig through large amounts of written information (although it’s currently restricted to Wikipedia and Freebase). As I suggested about a month ago, Powerset’s current setup is great for research, giving users the ability to sift through lots of data without reading a great deal more than necessary.

Now I could create more written information of my own about Powerset, but a few screenshots will do a better job of showing the engine’s strengths and weaknesses. First up, here’s a shot of me asking Powerset what the hormone melatonin is. Note the amount of information that’s shown in a compact space: A summary of the hormone, what its effects on the body are, and links to several articles (including an alternate choice, in case you were looking for the music album). 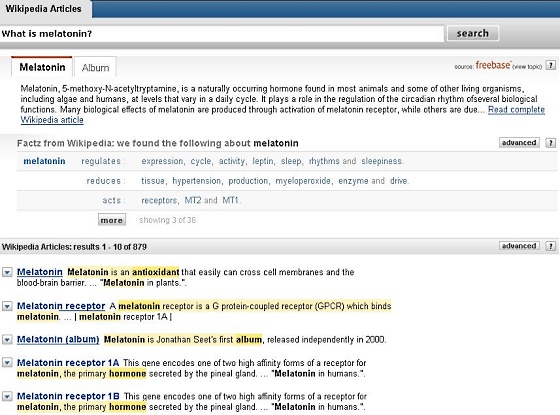 The above example shows Powerset’s greatest strength: When asking it short questions, it generally “gets” what you’re looking for, or at least seems to (in reality, it doesn’t “understand” your query any more than Google would). To show off the middle portion of the page a little more, I’ve done a second query, this time on what Einstein did. Note that the output is arranged by verbs: Einstein published, developed, used, etc. I’ve clicked on “theory” under the “developed” heading, and come up with a list of his most famous theories. 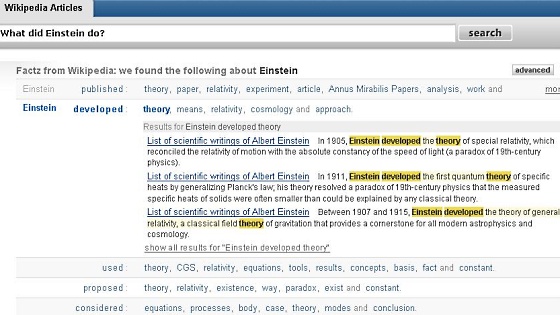 Finally, here’s snippet of a Powerset result page. What Powerset has done is reach into the semantic data storage at Freebase, pull out details about Barack Obama, and arrange them in a list. Wikipedia has more or less the same information, but human editors had to take time to put it together. There’s an obvious advantage to using Powerset here: 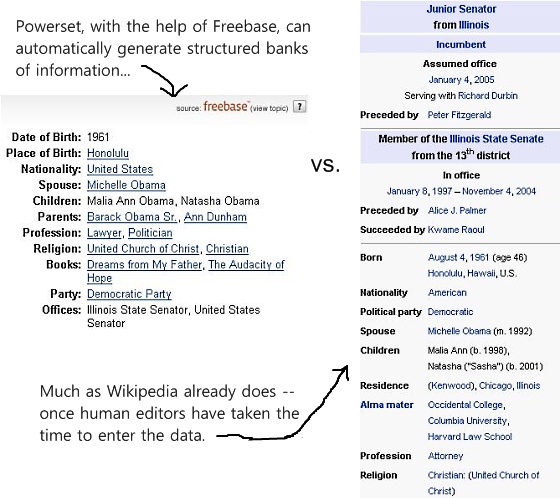 For an example of a question that can make Powerset choke, just take a look at this: “Who was in the cast of Breakfast at Tiffany’s?” Here, Powerset can’t yet do any better than Google would, because the question is too long. For an experienced user, that’s not a problem; they’ll know how to ask the right questions. However, assuming a level of proficiency is also a weakness. One of Google’s advantages is its drop-dead simplicity; enter a single term, and it does a decent job of returning information. Most people don’t know that Google has more advanced search tools, and if they did, they likely still wouldn’t take the time to learn them.

But for someone looking for information with an eye toward finding it quickly, Powerset does a good job. Wikipedia and other information portals were built around Google’s weakness in addressing that audience — so when you search for Einstein on Google, instead of really going out and searching for a great answer, Google is likely to just return Wikipedia as the top result, simply because Wikipedia has proved itself reliable. Powerset has more potential to dig through information intelligently, and choose its results based on quality, not just relevance and reliability.

Of course, for now Powerset is returning information almost entirely from Wikipedia, which is already pretty well-structured for finding information — so most people still aren’t likely to switch away from Google. That means the company’s next step is to broaden its sources. It’ll likely start out with well-structured, large websites like the movie database imdb.com, and from there branch out to more smaller sites.

On a broader level, there’s a question of what some dark horse competitors will end up launching. One company to keep an eye on is the stealth startup Cuill, which just raised a $25 million round, bringing its total to $34 million — well over twice Powerset’s $14.5 million. Blekko is another stealth search startup that some are speculating will operate in the same space, while Hakia is busy aiming at search verticals.

However, the profusion of search sites might not be a bad thing, for once. While dozens of companies (at least) have eyed Google’s lofty perch, only to burn out without significant results, an alternate future could involve room for multiple approaches to search. An open platform that returned the results from the most applicable search engine could tie the various competitors together, as I suggested in my article on Viewzi. With several serious, differentiated contenders to Google search, such a platform could open the way for new search offerings, while still keeping Google as the leader.

By the way, there’s a rumor floating that Powerset wants to sell, because it has hired an investment bank to check around. The latest bid, says CNET, is around $100 million, from Microsoft. Here’s the thing: Powerset’s investors probably want a decent return on their money, and $100 million likely won’t cut it (although the company isn’t commenting). Maybe twice that amount would, and Microsoft does have a few extra billions of dollars lying around, but everyone will likely want to sit back and see how Powerset does in the wild first.