Electronic medical records startup Practice Fusion raised a $70 million fourth round of funding this morning, a few months after we reported Series D talks. The company’s valuation is reportedly $700 million, which is in the range that we predicted.

It’s a huge chunk of funding for a company that raised a $34 million third round less than one year ago. Practice Fusion is now one of the most well funded players in the burgeoning health IT field.

And it is positioning itself for an initial public offering, the company told us today in an interview.

“We think this is the most viable health tech company for the IPO market, and we’re starting to eye it and prepare for it,” said chief executive Ryan Howard.

VentureBeat initially reported that Practice Fusion planned to raise $60 million, based on discussions with sources close to the matter. Howard confirmed today that the startup “overshot” its initial estimate and that the round was oversubscribed.

The company selected Kleiner Perkins Caufield & Byers (the growth equity arm, not the venture wing) and two East Coast institutional firms to lead its round. East Coast-based OrbiMed and Deerfield Management Company typically invest in late-stage or already public biotech companies. This puts Practice Fusion in a strong position for a public offering.

Howard believes that Practice Fusion is going after a bigger market than eBay, with its patient users spending $100 billion in health care this year. “We drive revenues from everyone connected to us,” said Howard, meaning big pharma, imaging centers, pharmacies, and labs.

Practice Fusion is best known for its web-based electronic medical record (EMR) for physicians and other care providers. The product isn’t as sophisticated as some of its competitors, but it has spread quickly among physicians as it’s available for free.

The company has traditionally made its money through advertising on its EMR, mostly from big pharma, although it continues to experiment with new revenue models.

For Practice Fusion and other electronic medical record providers, the business model will require some finessing. A source close to the company told me recently that Practice Fusion didn’t meet its revenue goals in 2012. Howard denied that the company is struggling to raise revenues, claiming that last month was the “best ever” from a growth perspective.

In a press release, the company claimed it has experienced significant revenue growth in the past year, increasing 300 percent from 2012.

Given that the company is gunning for a public offering (and to ignite investors’ interest in health IT), let’s take a deeper dive into its beginnings and plans for the future.

Practice Fusion competes in an increasingly flooded market — there are over 300 electronic health record (EHR) providers vying for the same pool of physicians. East Coast rival CareCloud recently raised a huge third round of funding (over $30 million) so it can differentiate itself in such a hot sector.

Practice Fusion claims that one in four doctors shifting over to an EMR today chooses Practice Fusion. And with over $134 million in total funding, it has the cash to stake its claim in the market.

However, health-focused investors, like CareCloud investor Jeffrey Diehl, are betting that even if a period of consolidation occurs, the addressable market is large enough for more than one vendor to succeed. 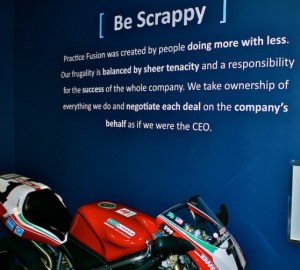 Above: A reminder to employees at the San Francisco office

Howard often tells the story of how the company got its start — and memorabilia from the early years is strewn throughout the office.

Back in 2005/2006, Howard nearly ran out of funding and could barely afford to keep on his engineers. When he was involved in a serious motorcycle accident, he used the settlement cash to pay the salaries of key employees.

That motorcycle is still in Practice Fusion’s San Francisco office, propped below a message on the wall, “Be Scrappy.”

Not long after, the company caught the attention of a band of angel investors, including PayPal cofounder Peter Thiel. The timing for a company like Practice Fusion was ideal, given that President Barack Obama passed a series of health care reforms to drive down inflated health care costs.

In 2007, Practice Fusion seemed poised to capitalize on these reforms.

A government mandate pushed doctors to adopt electronic health records. Health care providers who did not comply by 2015 would be penalized. Those who moved paper-based records online would receive “Meaningful Use” checks in the mail.

Plans for the future

All eyes are now on Practice Fusion — its IPO will continue to spur interest in the still-nascent health IT field. Howard did not put a timeline on the public offering, as the company is still building out its business model.

Howard said that Patient Fusion isn’t intended as a rival to ZocDoc. The team built it to “close the loop.” He also doesn’t plan to monetize this offering by charging physicians.

Patient Fusion is a strategic move, given that Practice Fusion has already amassed doctor profiles and information about individuals’ health, all contained within its EMR. Howard told me that by marketing new products to patients, the company will augment its brand with hospital decision-makers.

Another area of interest and growth for the company: data and analytics. It made its first acquisition earlier this year, snapping up mobile health startup 100Plus, and it gained a small data science team in the process.

On the topic of patient data, Howard stresses that he’s aware of the ethical concerns. “We don’t sell data sets to payers,” he said on stage at VentureBeat’s recent HealthBeat conference.

Editor’s note: Our upcoming DataBeat conference, Dec. 4-Dec. 5 in Redwood City, is our inaugural event focused on the significant opportunities afforded to enterprise in the area of big data. Register today!

However, Howard is thinking about ways to use data contained within an EMR to benefit patients. “We can recommend drug therapies based on their popularity [with previous patients],” he said, and claims there are 200,000 avoidable deaths a year because “data is simply not shared.”

The company is also delving into the field of population management, which Howard loosely defines as a means to “identify high risk patients in your network.”

Howard added that the company recently signed a “seven-figure deal” with a large payer. He suggests that patients signed up to Patient Fusion will soon receive SMS alerts if they’re at risk for falling ill. If your blood pressure is high, and you haven’t seen your doctor in over a year, the system will alert you. Care providers and payers can cut down on costs if they can track patients remotely and take steps to prevent emergency trips to the hospital.

Practice Fusion intends to build these new products in-house, but executives are keeping a close eye on health upstarts. Practice Fusion dabbled in a health accelerator of sorts, based out of its San Francisco office (this is how Ringadoc got its start). It doesn’t appear to have welcomed any new startups of late.

Howard continues to be a keen angel investor in health startups, and Practice Fusion hasn’t ruled out the possibility of a strategic acquisition in the near future.