What Remains of Edith Finch is a video game that is a collection of stories about 13 people on their last day of living. It is a haunting tale, more like a ghost story than horror. And it is very creative.

The challenge for the developer — Santa Monica, California-based Giant Sparrow — is to get you to finish the game. Ian Dallas, the creative director at the game studio Giant Sparrow, showed me a preview of Giant Sparrow’s upcoming PlayStation 4 and PC game. The game from publisher Annapurna Interactive debuts for $20 on April 25. Dallas thinks of the game as a psychological ghost story, with a dark vision but not quite a horror story.

“Edith’s own journey provides the spine of it,” Dallas said. “It’s her coming to terms with it. The stories themselves are hopefully interesting enough on their own, and these things weave together. Different characters return.”

The bizarre title is the second major game from Santa Monica, Calif.-based Giant Sparrow. Previously, the company created The Unfinished Swan, one of the finest indie games on the PlayStation 3. Dallas created that game after his mother came down with cancer, and he felt like a child who loses a parent is like an unfinished work of art. 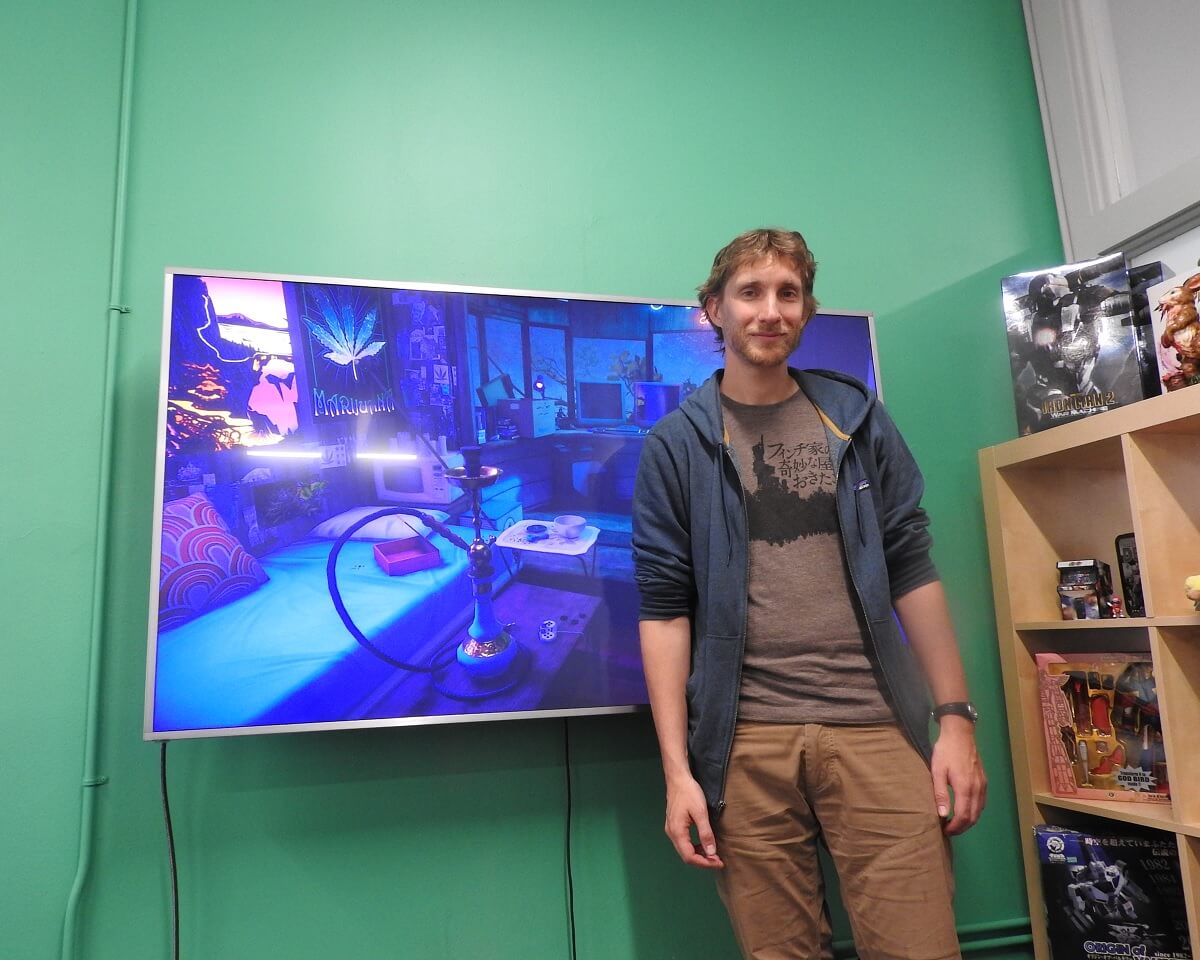 Above: Ian Dallas, founder of Giant Sparrow, shows off What Remains of Edith Finch.

With Edith Finch, the inspiration was once again the prospect of death. In this game, the narrator is Edith Finch, whose mother has just died. As the player, your job is to find out what happened to the Finch family. The game consists of various stories, each of them depicting the last moments of someone’s life.

“The stories have an ominous tone,” Dallas said. “But the stories themselves — our intent is to have a light touch with them. Anything the player perceives as dark or dreadful is hopefully coming from them. They bring enough of their own darkness that we do not have to supply it.”

The Finch game is a haunting tale about a cursed family in the state of Washington and how each member of the family dies. It takes place across generations, but each tale involves something to do with the Finch home, which has become a huge vertical property because each time someone dies, the rest of the family seals off the bedroom. 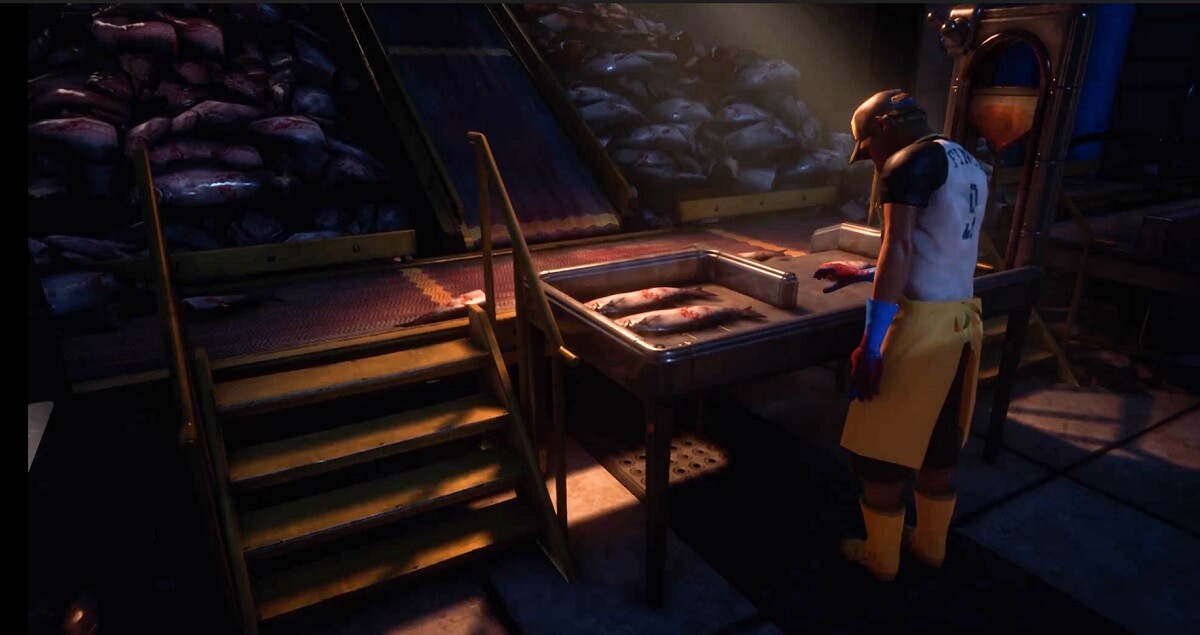 Above: Lewis Finch at the fish cannery.

Each story you find lets you experience the life of a new family member on the day of their death, with stories ranging from the distant past to the present day. At the beginning of the game, all you have is Edith’s journal. You wonder what has happened to everyone, and what the curse is about.

“Ultimately all of these stories are about the unknown,” Dallas said.

In this demo, I walked into the bedroom of Edith’s brother, Lewis. His room has a poster of a marijuana plant and a huge blue bong for smoking weed. You look around the room and interact with things. Edith, the narrator, notes when you come across a video game that Lewis wasn’t so good at games. “He died a lot,” Edith said, with no particularly ominous sound in her voice.

When you find another object, a letter from Lewis’ psychologist, you are transported into Lewis’ death story. He happened to have a monotonous job at a fish cannery, where his job was to take the fish coming down a conveyor belt and behead them in a guillotine, which falls at a regular, automated pace.

Lewis Finch was bored, so he used his imagination to fantasize. On the right side of the screen, you see and hear the fish guillotine, which you have to keep feeding by grabbing a fish and moving it under the guillotine. But on the left side of the screen, you see Lewis’ fantasy life coming to life. He dreams about being an important person on his way to a coronation. You control the fish with the right stick, but you also control Lewis as he walks through the streets of a beautiful cartoon city. As time goes on, the narrator tells you what Lewis is fantasizing about, and it becomes more and more important in Lewis’ mind, in contrast to the time he spends thinking about the fish in the real world. But the whole time, you hear the sound of the guillotine.

When Lewis dies, you can understand what was going on inside his head at that particular moment, and it is sadly touching. I found that short tale to be very creative, the kind of experience that I’ve never had in a video game before.

“Never knowing what is about to happen is the carrot,” Dallas said. “Each of these stories is so different from the one before it. There is also this thread of Edith trying to find out what happened to everyone. But we try to signal to everyone that there isn’t a big reveal. It’s about what has happened. How has my family dealt with it, and how should I deal with it?” 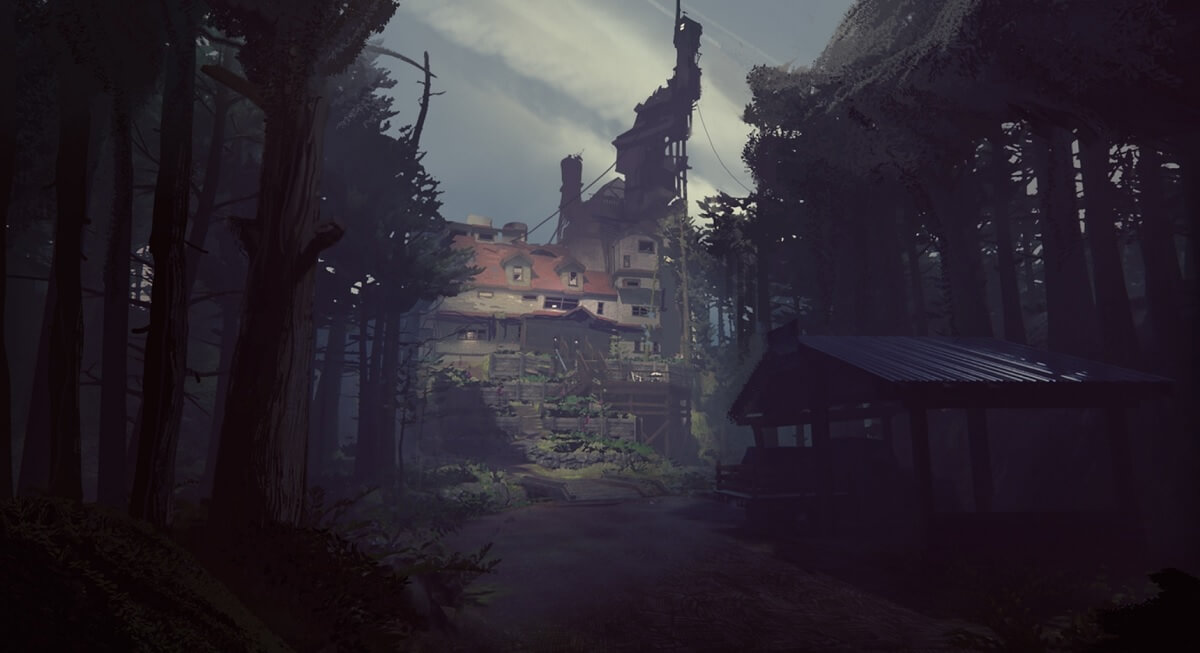 Above: The crazy house in What Remains of Edith Finch.

Lewis is one of 13 family members. In the earlier preview, I spent time exploring the Washington state home of the Finch family. The house is an empty place like the mansion in Gone Home. But the story breaks into strange sequences, like a dream that Molly, one of the family members, has.

She turns into an owl and hunts rabbits. In mid-dream, the owl turns into a shark, which tumbles to the ground and bounces into the ocean. That was one of the weirdest experiences I had in a video game, and it made me laugh. The graphics, based on the Unreal Engine 4, are beautiful.

Some of the stories are as long as 20 minutes, while others are as short as three minutes. The intent isn’t to scare you so much as to keep you interested in the tale.

Sony is also including What Remains of Edith Finch in its Play Collective promotion, alongside a lineup of digital games.