Prezi, the popular presentation platform from the company of the same name, is launching its first ever standalone app today, as it targets the consumer realm for the first time.

With offices in San Francisco and its native Budapest in Hungary, Prezi has built a solid fan base for its slick presentation-building platform, and today claims 50 million users around the world. The company has been funded to the tune of $70 million since it was founded in 2009 — the bulk of which came just a few months back.

With Nutshell, Prezi is encroaching on familiar grounds, given that users are able to create mini movies from still images — yes, like slideshows. But this is Prezi we’re talking about here, so this isn’t yet another dull slideshow app to bore your family with all your holiday snaps — no, it’s slicker than that.

If you’ve used Prezi before, you’ll know that it uses a “zoomable” canvas on which you can plot all the different components for your presentation. Prezi can then use motion to fill the gaps between the various elements to create a slick movie-like experience far beyond that of something like PowerPoint. And it’s this design ethos that’s evident in Nutshell too. 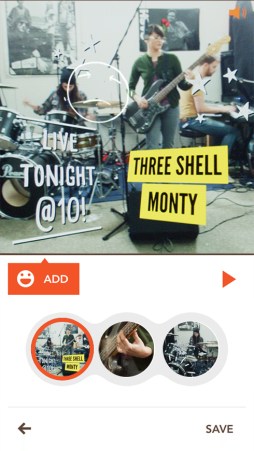 Users snap three photos in a row, then Nutshell “animates” them into a sequence that can be spruced up with graphics and text to be shared across all the usual social conduits, including Twitter and Instagram.

Prezi cofounder Adam Somlai-Fischer says the idea for Nutshell came about when they noticed its users were using Prezi for a myriad of life events, including holidays, birthdays, and even marriage proposals.

“Nutshell is exactly what its name implies: an epic story condensed into the space of a moment,” explains Somlai-Fischer. “We incorporated some of the best features of Prezi – which helps people use spatial context to share ideas and visually communicate moments in their life in an equally impactful and memorable way.”

The mobile-first approach with Nutshell is also indicative of the direction Prezi is taking in general, as it recently revealed a new feature that lets its users deliver and view presentations in real time directly from their phone.

Although Prezi has a native app for iOS already, Nutshell represents the first separate new product the company has launched in its six-year history.