Windows 10’s Microsoft Store has had better weeks. After Apple delayed iTunes’ launch in the store, Google snuck a Chrome installer past Microsoft and the company had to remove it. I say “snuck” because this should not have happened in the first place.

Google’s argument for the Chrome installer is simple: Fake Chrome apps get into the Microsoft Store all the time, so an official entry will let users get the browser they want. Google points out that Microsoft is giving Edge preferential treatment and that it doesn’t do a good job of keeping its app store clean.

I love Microsoft, but…

Microsoft denies Chrome the tools it needs to protect users when installed from the Windows Store. (BTW, they grant those tools to Edge.)

So we made a mini-app to help users get the full, safe version of Chrome. It was pulled.https://t.co/0AACtC1nY3

Microsoft’s argument is that an installer doesn’t adhere to the store’s rules for an app. Furthermore, browsers in the Microsoft Store need to use EdgeHTML, the Edge rendering engine.

The debate then naturally shifts to who is in the right: Google or Microsoft? It doesn’t make sense for Google to offer an EdgeHTML version of Chrome, given there are just a handful of users running Windows 10 S, which can only launch apps from the Microsoft Store. Microsoft does not want to allow browsers with their own rendering engines into its store for the same reasons Apple and Google don’t do so with the App Store and Chrome Web Store, respectively.

Apple and Google both have apps in their stores that have absolutely no right to be there. There are too many cases of fake, spam, or malicious apps to list. But this week’s Microsoft Store failure is something else.

I simply can’t believe that Microsoft let the Chrome installer into the Microsoft Store, only to remove it some 12 hours later. There were multiple red flags.

The “installer” didn’t even install Chrome. It literally just opened up your default Windows 10 browser and took you to Google’s Chrome download page. Did nobody even launch this thing before approving it? 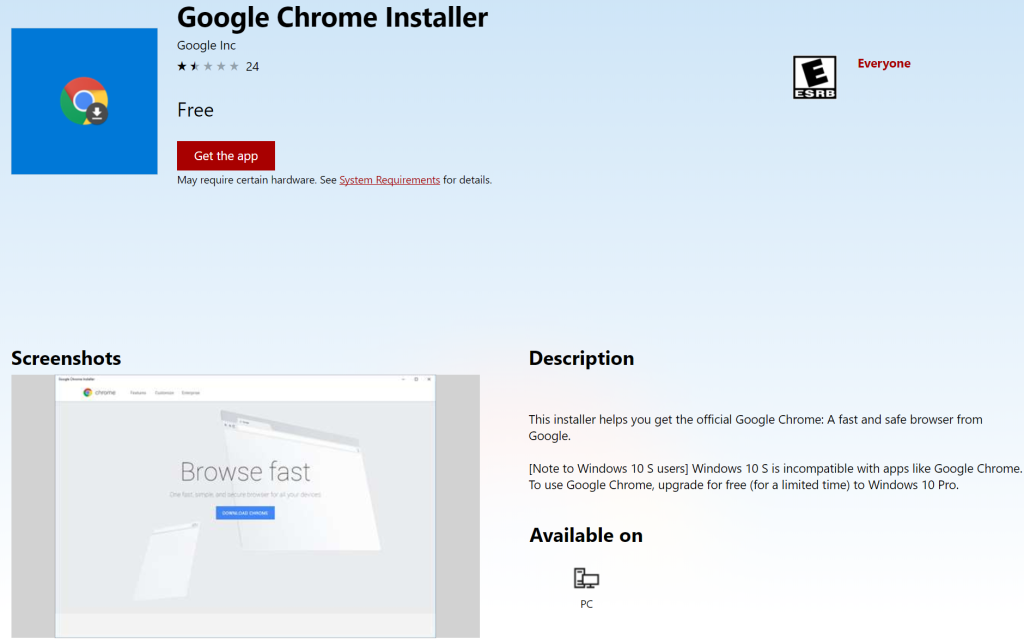 What kind of app approval process are you running where you don’t check what the app does, let alone its name and description? How do you miss that Google, which has a single app in your store, just submitted a second one?

This is Microsoft we’re talking about, not Fitbit. Microsoft has the resources to test submissions, or at least automatically verify that an app is functional and not just a link.

Microsoft rebranded the Windows Store as the Microsoft Store in October. The company has to rebrand something every quarter, you see, or it can no longer call itself Microsoft.

You would think that with such a rebranding, there would be a big push from the various departments to ensure the Microsoft Store is a success. You know, a new look, a thorough cleaning of the existing items, and maybe some outreach to companies like Google that make popular apps?

Nah, let’s just let in whatever gets submitted.