The U.S. sanctions against Huawei are working. We learned last week that the Chinese company’s growth slowed sharply with Q3 2020 revenue of $32.5 billion, up just 3.7% year-over-year. Revenue growth for the first nine months of 2020 was 9.9%, compared to 24.4% for the same period in 2019. But market share figures from IDC and Canalys out yesterday show that Huawei’s losses are merely Xiaomi’s gains.

In Q3 2018, Huawei overtook Apple, marking the first time in seven years that Samsung and Apple were not the top two smartphone makers. Huawei and Apple went back and forth a few times for that second place spot. But in Q2 2020, Huawei dethroned Samsung for the top spot, despite U.S. sanctions. It turns out the impact was merely delayed: In Q3 2020, Huawei dropped like a rock, putting Samsung back in pole position. Meanwhile, Xiaomi overtook Apple for the first time.

Breaking down the numbers

Apple aside, only Huawei shipped fewer units in Q3 2020 compared to Q3 2019. (Apple shipped fewer iPhones largely due to a late iPhone 12 compared to predecessors, which typically debut in the third quarter). Given the market only declined 1.3%, it’s easy to see that Xiaomi directly benefited from Huawei’s losses, per IDC: 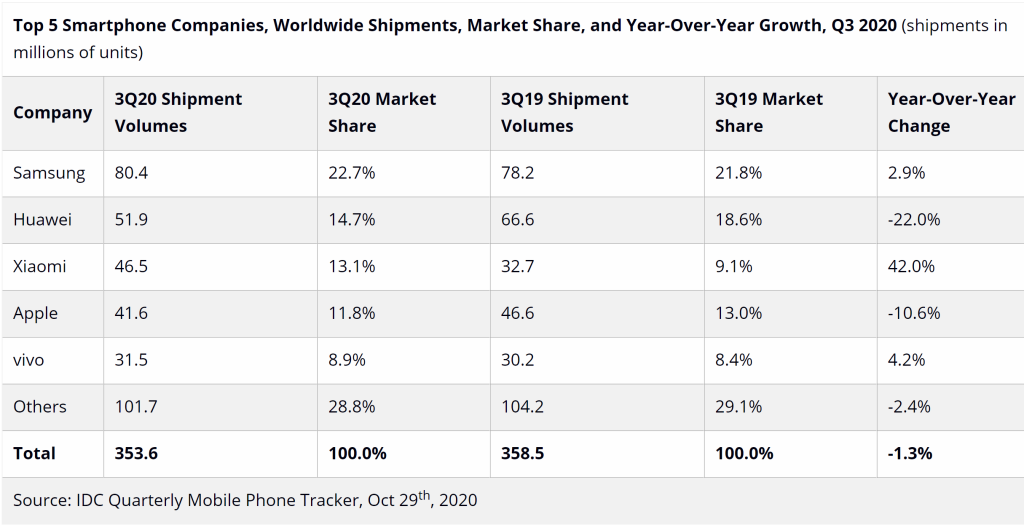 We all know why this is happening. In May 2019, the U.S. added Huawei to the “entity list,” barring suppliers of software and manufacturing equipment from doing business with the Chinese company without first obtaining a license. One major consequence of the U.S. trade ban was that Huawei couldn’t ship phones running Android with Google Mobile Services. The U.S. has further been pressing governments around the world to squeeze Huawei out, arguing the company would hand over data to the Chinese government. Huawei denies it spies for China.

Huawei could very well be under China’s thumb. And many believe the real concern is around Huawei’s lead in 5G technology rather than its smartphones. But in the smartphone market, all the U.S. has achieved is swapping one Chinese company for another Chinese company.

I’m not sure this is a precedent the U.S. government wants to set. Imagine a scenario where the Chinese government sanctions Apple over iMessage concerns. Meanwhile, Mac sales take a hit and Dell in turn sells more laptops. Do we really want a world where instead of writing laws and policy to encourage or discourage market behaviors, governments senselessly attack individual companies?

There need to be rules of engagement, to be sure, but millions of consumers are now buying Xiaomi phones instead of Huawei phones, not because Xiaomi’s products are superior but because Huawei has been cut out the market. It’s easy to see how the U.S. sanctions will benefit all the other phone makers. But the story won’t end here — other governments will want to play kingmaker too. When all is said and done, the real loser won’t be Huawei — it will be the whole tech industry.