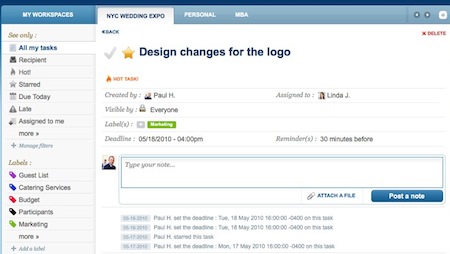 There are a lot of tools out that promise to help manage team projects and tasks, but Ilan Abehassera, cofounder and chief executive of a startup called Producteev, says they’re all too complicated.

Producteev, on the other hand, should allow users to create tasks with as few clicks as possible, while still including features like due dates, comments, and related files and documents. With its just-launched upgrade, Producteev Two, the New York-based company makes things even easier with simple email integration.

For me, at least, this is crucial because so much of what I need to do is trapped in my inbox. Now users can forward emails that need to be addressed in some way to Producteev, where they automatically gets added to their to-do list. They can also type out a quick instant message to the Producteev account to add the task. In both cases, users can add category tags and due dates directly in the message, then receive alerts via email or IM when deadlines approach. You can also use Producteev’s new Gmail gadget to view their task list within Gmail itself. The idea is that you can use Producteev without having to log into the website, instead managing your tasks from the services you use already.

Another company called Liaise, which launched at VentureBeat’s DEMO conference, has also tackled the “everything is in my email” problem by trying to extract actionable items from messages. Producteev’s solution isn’t as technologically impressive, but it has the virtue of being simple, and because it’s not an email plugin, it can work on any email account, not just Outlook.

Other new features include a free iPhone application, an upcoming desktop application for Macs, and Producteev Academy, a social gaming option where users can win badges for different activities, such as completing the most tasks. The company also plans to allow developers to build plugins on top of Producteev through an application programming interface.

Producteev is available as a free product for individuals, with business pricing starting at $9 per workspace per month. The company said it has raised just under $1 million from Palm Ventures and a number of angel investors. (Disclosure: Producteev angel Aydin Senkut is also an investor in VentureBeat.)