Encrypted email provider ProtonMail has expanded its encrypted contacts feature to its mobile app on Android and iOS.

The Swiss company first introduced encrypted contacts to its web-based app last year, bringing “zero-access encryption” to those who wish to protect confidential contacts, as a journalist may wish to do.

With this feature, ProtonMail users are promised an extra layer of security, meaning that phone numbers, addresses, profile photos, and personalized notes cannot be accessed from any external source, including by anyone working at ProtonMail.

It’s worth noting here that the name and email address fields within the address book are not encrypted, as ProtonMail needs to be able to read them in order to send an email. However, they are “digitally signed,” meaning that users would receive a warning if any third party attempted to tamper with these details.

Prior to now, the ProtonMail mobile app would only display a contact’s name and email address, which — as noted — aren’t encrypted. But as of version 1.8.0 of the mobile app, users will have access to a full-fledged encrypted contact book with phone number fields, addresses, and notes. 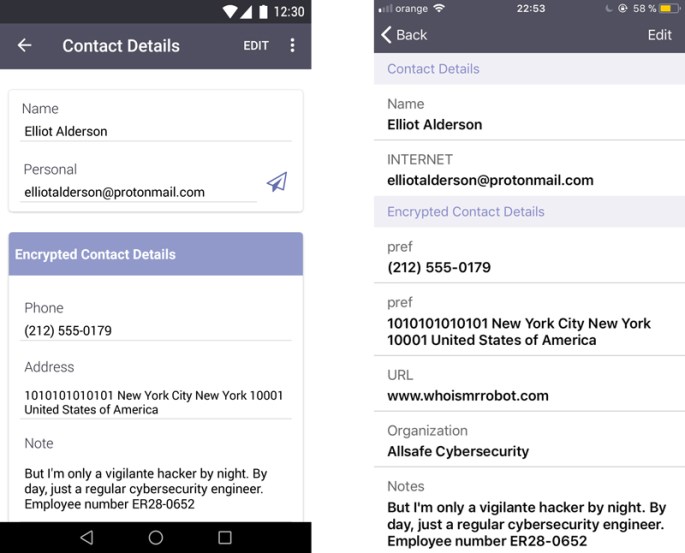 Above: ProtonMail: Encrypted contacts on mobile

ProtonMail was founded out of CERN in 2013 with the promise of encrypted email with full client-side encryption. The service launched globally in March 2016, and the company has since added two-factor authentication (2FA), alongside Tor support, multilingual access, support for desktop email clients such as Outlook, Thunderbird, and Apple Mail, and a standalone virtual private network app called ProtonVPN.

ProtonMail is capitalizing on privacy concerns spurred by seismic shifts across the political spectrum that have led to an uptick in demand for VPN and encrypted messaging services. In the wake of Donald Trump’s rise to the White House, ProtonMail said that its signups doubled.

Increased demand has also been evident following the Cambridge Analytica data privacy scandal that has engulfed Facebook. Firefox creator Mozilla pressed pause on its Facebook advertising before launching a Facebook Container add-on that lets users browse the web without Facebook tracking their every move. Smaller browser rival Vivaldi announced that it would now use privacy-focused DuckDuckGo as the default search engine in private browsing windows.

Related to these developments, news emerged last week that ProtonMail was actually used by the folks at Cambridge Analytica to help cover their tracks and that they used it to configure emails that automatically deleted after a recipient had read them.

Online security and data protection are now among the hottest topics in technology, and ProtonMail is positioning itself at the forefront of this battle with a bunch of apps and tools designed with privacy in mind.