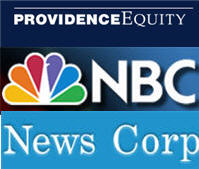 The YouTube-like site being formed by NBC Universal and News Corporation has received $100 in financing from a Rhode Island investment firm, Providence Equity Partners.

The New York Times’ Brad Stone has the story, saying the deal places a value of $1 billion on the venture, an astonishingly high valuation for a joint venture that has made surprisingly little progress since it was announced several months ago. The site, planned by NBC and News Corp. to feature their own copyrighted content, still has no name or Web site.

The fund-raising was expected, as was the valuation. The deal terms were leaked earlier (see our coverage; scroll down). VentureBeat has not confirmed the facts of the deal, including the valuation. The challenge confronting this venture is that there are two large companies behind it, with their own agendas, and indecisiveness means joint ventures typically don’t do well, as media investor Roger McNamee points out in the NYT piece.

The longer it waits, the greater YouTube’s establishes a lead in drawing viewers, and the more other sites and companies offer rival offerings — including the likes of Joost, which are trying to license similar content. Also NBC’s and News Corp’s own entities are already putting content online, rivaling the mission of their own joint venture. MySpace launched MySpaceTV, for example.

Perhaps Providence, led by Jonathan M. Nelson, who sits on the boards of MGM, Warner Music Group and the Yankees Entertainment and Sports Network, can bring focus and energy to the venture. Nelson has invested in other media properties such as local newspapers, television stations and cable networks. In June, his firm also invested $850 million into NexTag, the online comparison shopping site.