When we first talked with Pudding Media CEO Ariel Maislos in September, he showed us his company’s software — a voice-recognition system capable of picking up keywords from conversations and using them to deliver contextual advertising to users.

The system isn’t working perfectly, but Pudding Media provides a good example of a company that’s moving into new territory hoping to succeed against significant technical barriers. Its potential has now led VCs to place a significant $8 million bet on the technology.

When working as planned, Pudding’s software listens to the conversations of users for keywords from its database. For instance, if we were talking about having a lunch meeting, it might pick up the words ‘sushi’ and ‘San Francisco’ to pop up an ad for a local Japanese restaurant.

To become more accurate, Pudding must assemble a large database or “taxonomy” of terms that people might use. Part of the challenge for the company is simply building that database, much as Google’s Adsense built a database of relevant keywords people use in searches. 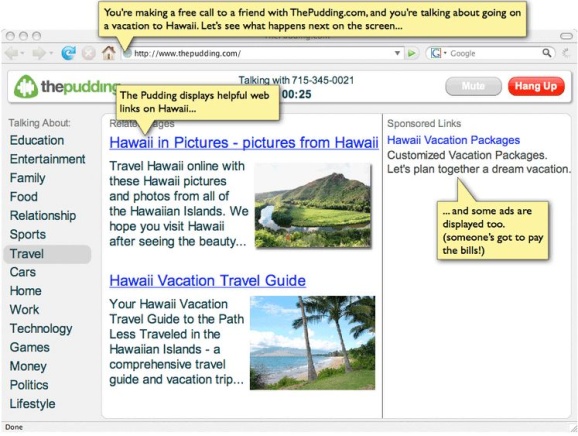 The difference between what Pudding does and web advertising is that Pudding won’t save your conversations and keywords to build up an advertising profile over time. The keyword lists from each conversation are deleted upon its conclusion, a measure the company has taken to forestall user concerns over privacy.

Instead, the advertisements will be entirely determined by the conversation at hand, and will attempt to track, in real-time, what users are talking about. That can have some interesting (and inaccurate) consequences, as we found before, but the results should continue to improve with time.

For now, the company has some breathing room. There are no direct competitors to its service. It’s also only active through its own ThePudding.com website and a partnership with Meebo, for the moment. However, Pudding’s keeping an eye out for potential partnerships.

Even mobile carriers might eventually want to use the service, suggests Ken Elefant of Opus Capital, the lead VC firm in the investment. Because consumers are not willing to pay as much for minutes as in the past, mobile carriers are having to begin thinking about how they will advertise. Pudding could also work on a cellphone, though perhaps less effectively than for a user watching a computer screen.