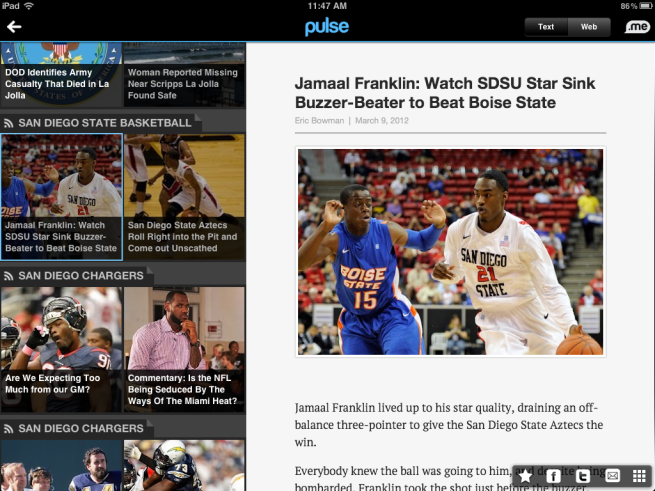 Pulse has gone from college project to social news powerhouse in two years’ time. Friday, the blossoming business is taking a leap forward by going local.

Pulse, made by startup Alphonso Labs, has launched Pulse Local to provide application users on smartphones and tablets with local news, sports, food content, and deals, all sourced from third-party partners such as CBS Local News, Patch, Bleacher Report, Zagat, Groupon, and LivingSocial.

Pulse is a news-reading application for consuming and sharing content from a variety of social feeds and publishers. It competes with Flipboard and a smattering of similarly purposed apps, such as Zite. The application first launched in 2010 on the iPad, and is now available for iPhone, iPad, Android, Kindle Fire, and Nook, has become ubiquitous and touts 13 million users who read upwards of 200 million stories each month.

The local play will provide the application’s growing user base with even more quality content to browse in an aesthetically pleasing mobile environment. It may also establish a viable revenue stream for the young company.

“We’ve been working on this for the last six months,” co-founder Akshay Kothari told VentureBeat. “It clearly creates a very personal experience.”

People can now open the application and find local content from a variety of sources across four different categories: news, sports, food, and deals. CBS Local News and Patch are the two largest providers of local news, but smaller publishers such as The Bold Italic and Gothamist have a place inside Pulse, as well. This the first third-party distribution deal for Patch, the local news network from AOL, Kothari said.

Local deals from Groupon, LivingSocial, and Gilt are designed to be revenue-generating content. Kothari wouldn’t disclose exact terms of Pulse’s relationship with deal providers, but did say that his company is earning revenue in two different ways: for deals bought by way of Pulse and for new subscribers acquired through Pulse.

Pulse’s revenue-oriented relationships with deal partners may foreshadow future money-making opportunities. The application hinges around content provided by more than 250 partner publishers, Kothari said, and while these deals have been entirely centered around distribution, talks with publishers have started to progress to include discussions on monetizing traffic.

“We want to keep a focus on content,” Kothari said. “Even when we think about commerce, we really want to focus on how we can connect really interesting content to commerce. Advertising should not feel like advertising. It should be engaging content that people want to engage with.”

Palo Alto-based Alphonso Labs has 20 employees and has raised north of $10 million for Pulse.