New data shows venture capital investments plummeted during the final three months of 2008: VCs invested $5.4 billion in 818 deals, down 26 percent from the $7.3 billion Q3, and the lowest dollar amount invested since the first three months of 2005.

That’s according to the latest MoneyTree Report on venture investments, compiled by PricewaterhouseCoopers and the National Venture Capital Association. Overall, the report shows $28.3 billion invested in 3,808 deals during the past year, making 2008 the first time venture investments have fallen year-to-year since 2003.

That means Silicon Valley tech companies, typically the recipients of a good third of the nation’s venture capital investments, are increasingly being starved of new capital. The best companies, of course, will likely get enough capital to survive, as venture investors perform triage on their portfolios. Companies with questionable business models will be more likely to bite the dust.

The numbers come as no surprise — venture investment already declined substantially in Q3, even before firms were feeling the full effect of the financial industry’s collapse. Dow Jones VentureSource has already released its own numbers showing a similar drop, albeit with more money ($5.5 billion) invested in fewer deals (554). Also, the NVCA and Thomson Reuters released data earlier this week showing that venture firms themselves raised less money during Q4. At the time, NVCA President Mark Heesen attributed some of that decline to VCs investing all the money they raised in the past two years, but if that’s the case, the firms aren’t investing all that much of it. 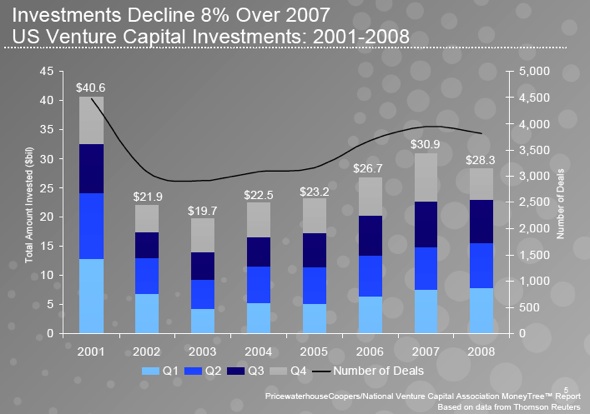 In terms of dollar amounts, Internet-specific companies got 26 percent less venture capital than the previous quarter, life science companies got 33 percent less, and even cleantech companies got 14 percent less. Things aren’t likely to pick up soon, either; in a recent survey, a majority of VCs said they expect the industry to invest at least 10 percent less in 2009 than it did last year.

With this barrage of bad news, NVCA and PWC spokespeople were eager to point out something positive. The most compelling silver lining lies in cleantech — sure, investment fell in Q4, but not by much compared to other industries. And if you look at all of 2008, cleantech investments actually rose a whopping 52 percent from the year before. The sector accounted for seven of the year’s 10 largest deals. (I’ve embedded a spreadsheet with the top 10 deals of the year below.)

The NVCA also noted that for all of 2008, seed investing grew compared to 2007 and early-stage investment held steady. Even in Q4, early-stage investing only fell 3 or 4 percent (the press release seems a bit confused about this) to $1.3 billion, so there’s still hope for newer startups.