Intel Capital chief Arvind Sodhani talked with VentureBeat today about why the world’s largest chip maker participated as an investor in the $12 billion Clearwire-Sprint deal. Intel, along with Google, Comcast, Time Warner Cable and Bright House Networks invested a combined $3.2 billion into the new company. Intel’s share of that was $1 billion, which is no surprise since Intel has been the biggest proponent of WiMax, the long-range wireless Internet technology that the combined company will deploy. He talked about WiMax and Intel Capital’s own latest moves. 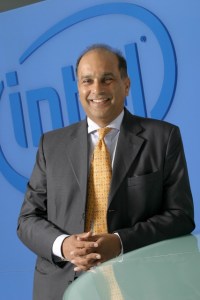 VB: Can you discuss the logic of participating in this deal?

AS: WiMax is crucial for our strategy. We want to facilitate the deployment by providing capital. That’s what Intel Capital does. WiMax is here. It’s happening. It’s two to three years ahead of any competing technology. It’s getting deployed. It’s cheaper and faster. It’s getting embedded into our Montevina platform and will be in laptops in the coming quarters.

VB: By making a big bet in this, you seem to be saying that WiMax will beat the alternatives. Is that correct?

AS: What other options are there?

AS: LTE is a good two or three years behind. There is nothing there. We can’t wait three years.

VB: And WiMax is a better technology?

AS: It’s the fastest technology. If and when [LTE] comes out, it will have similar speeds to what WiMax has today and WiMax will have moved on to the next generation by that time. If you want a high-speed wireless connection to your laptop in the near future, there are not that many options. That’s why we are pushing the technology because we want connectivity to laptops and the forthcoming mobile Internet devices.

VB: A lot of people must wonder why WiMax has taken so long. Can you explain the scale of the effort?

VB: I would expect you would want to have a competitive market and that the combination of these two companies would be a setback for WiMax.

AS: Not at all. The cost of building a network today is so big that building competing networks is a financial impossibility.

VB: Because you’re making a big investment in WiMax, does that mean Intel Capital won’t invest as much in other areas?

AS: No. We treat these large investments as one-offs that don’t impact the rest of our activity. In 2006, we invested over $1 billion and about $600 million of that was our investment in Clearwire. This won’t affect our other investments.

VB: What other sectors, trends or geographies are you betting on this year?

AS: We announced a $500 million Intel Capital China investment fund a month ago, having fully invested our $200 million fund that was launched in July 2005. We remain globally focused. We are very active. We are in the consumer Internet, enterprise computing, software as a service, mobility platforms, cleantech, and biotech. It’s a broad spectrum.

VB: What do you think of the talk of bubbles in cleantech and social networking?

AS: I think it is hard to value a social networking company. It’s very difficult to figure that out, particularly since the monetization is not obvious. … You will not see us paying outrageous prices for social networking companies. In cleantech, people are falling over themselves and therefore valuations have gone through the roof. Even if you are at full capacity and growing your average selling prices, the economics may not match. These are bubble situations that will have a correction of some kind.

VB: What is your view of the slowing economy?

AS: The global economy is doing quite well. This really a U.S. problem. It can impact the other geographies because the U.S. is 34 percent of the world’s GDP. It will hurt those who export to the U.S., with the exception of some countries like Brazil and India which are not big exporters to the U.S.

AS: It’s an evolving portfolio. … Our portfolio is $2.7 billion across 400 companies. That’s not including the new investment. At any given time, we are in that ballpark. We add 50 to 70 new companies a year. A similar number have exits.

VB: What is your feeling of the venture business now?

AS: It is healthy. There is still too much capital chasing too few deals globally. So the valuations are higher than justified given the macro environment. We are concerned about valuations generally.

VB: For Clearwire, what kind of outcome would you like to see?

AS: We would like to see a rapid SEC approval and then early deployment. We will see them move to new metro areas that they are going to build out. Then consumers with our laptops with embedded WiMax will be able to enjoy the benefits of the high-speed Internet.

VB: Is it interesting that Craig McCaw (founder of Clearwire) is disrupting cell phones, a business he helped create, which was itself a disrupter of land lines?

AS: Yes, Craig is a disrupter. All new technology can disrupt the old ways of doing things. Typically, successful technologies are faster, better, cheaper and global. WiMax has all of those attributes.

VB: How much is the PC still front and center for the things you want to achieve?

AS: PCs and laptops are the most important things we focus on, along with new businesses that might use embedded processors.

VB: Is there something about the WiMax ecosystem you would like to see grow faster?

AS: It’s a global effort. We are working around the world. There is work to do in backhaul, power supplies, installation, securing rooftops, and interoperability. It’s time consuming and capital intensive. What we want is a nationwide deployment where people can go anywhere to have broadband access.