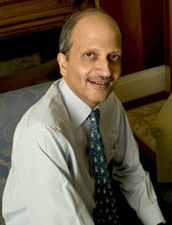 I’ve heard more and more talk about cloud computing recently, but there’s still a lot of fuzziness about what exactly the cloud is, and what business opportunities it provides. The inaugural Cloud Summit Executive conference in Mountain View attempted to answer those questions earlier this week. Afterwards, I spoke to conference host M.R. Rangaswami of The Sand Hill Group about defining the cloud, how startups can make money from it and why an economic downturn could actually be a good thing for cloud computing.

VB: What were the conference’s big themes?

MRR: Several. One is uncovering some of the opportunities that could be available to entrepreneurs and investors. One area that really surfaced was a set of opportunities around managing the cloud and making the cloud easier for people to adopt. I think it was easy to identify a layer on top of all the [existing] services. It was an area that I hadn’t thought of before.

Another one was the whole issue of lock-in. You know, if you start using cloud-based computing, are you locked into the vendors? And it appeared from the conversations with the vendors that yes, there was a lock-in. So you could do away with a lot of the other contractual commitments because the lock-in itself provided enough barrier to exit. [In other words, the difficulty of switching from one cloud platform to another locks customers in.]

The third thing is, it was clear to me after the conversations today that the cloud is going to really take hold in the SMB [small-to-medium-business] markets and really see a tremendous amount of value there, especially in light of today’s economic circumstances. The big guys are still going to wait.

VB: How would you define cloud computing?

MRR: I would say that cloud computing is more than SaaS [software as a service], for sure. It’s different from SaaS in that cloud computing will include virtual storage and will include virtual compute power. And it’s also much more of a pay-as-you-go model. I’m sure there are going to be other characteristics, but those are the two or three basic ones that make it very different from today’s SaaS paradigm.

VB: One thing that was mentioned during the conference was the idea that there hasn’t necessarily been a catalyst to move people into the cloud, especially the bigger companies. I’m curious what form that catalyst might take.

MRR: I think one form this could take is a line of executives and departmental managers in companies expressing their frustration or inability to get things done within their own organizations kind of taking it upon themselves as empowered executives to go make some decisions in the IT space, and kind of start testing and using and utilizing and deploying cloud-based applications and cloud-based services on their own. In a sense, much like in SaaS, some of that happened initially, where mavericks actually kind of did that with SaaS and then it became more mainstream.

VB: What did you think about the idea that this economic downturn could be something of a catalyst, too?

MRR: That would be the other thing, where people can’t afford millions of dollars, they can afford thousands of dollars and [the cloud] gives you that capability. And as one of the VCs Navin [Chadda of the Mayfield Fund] mentioned, this is a great way for companies to leverage other people’s investments and build on their IT infrastructure.

VB: He also mentioned that that the cloud is going to provide a lot of opportunity for entrepreneurs. Do you agree?

MRR: I think the opportunity is based on this premise that you’re leveraging other people’s investments. So you’re leveraging what Amazon has done with EC2 or what Sun is doing with their similar product. And then you write applications around that core infrastructure and you yourself haven’t invested any money in hardware. And I do agree with Navin that there could be a lot of opportunity around that and help form a layer on top of the basic infrastructure services.

VB: Do you see a point where cloud computing could become a force in large companies as well?

MRR: I think so. It’s going to take a while because people are going to wait a while for the incumbents like the Oracles and the SAPs that are going to eventually enable that. Three months ago we polled large companies, and large enterprises were willing to waiting for the large incumbent vendors to provide them with these solutions. So both sides of the table are comfortable with their positions. There was no urgency on either side.

VB: What are the big topics going to be at next year’s conference?

MRR: When we meet a year from now we’ll learn from a lot of the failures in the next twelve months and mistakes that have been made. I think we might also see the emergence of a few companies who are getting a few million dollars in revenue. So we’re going to go and look at the first crop of companies who actually sold stuff. We’re going to see both.