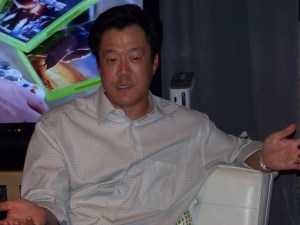 The video game console business is a three-party war, between Microsoft, Sony and Nintendo.

If you’re not winning the console war, it’s good to say that the war isn’t over yet.

In fact, it may not be over for years. That’s what Shane Kim, head of Microsoft Game Studios, told me yesterday at the company’s game showcase event in San Francisco. I sat down with Kim with a group of game journalists to discuss what it’s like in the trenches, with Nintendo at No. 1 and Microsoft and Sony battling it out for No. 2.

Q: How are you juggling the release schedules for the big titles coming for the Xbox 360?

A: We don’t want to release titles on top of each other. Especially similar titles. “Too Human” is coming out in the near future (August). We’re not worried about that running into other titles, knock on wood. The two big titles we have to keep apart are “Fable II” and “Gears of War 2.” You want them separated by a few weeks. Gears of War 2 is coming out in November. Peter Molyneux (developer of Fable II) knows that and has that in mind.

Q: You have a lot of big games. Are there any smaller titles that aren’t here?

A: The only two titles that we have announced but aren’t here are “Alan Wake” and “Halo Wars.” Those aren’t smaller titles. I’d rather not show you since, ultimately, you guys might be disappointed. And you guys would write that. It’s software. 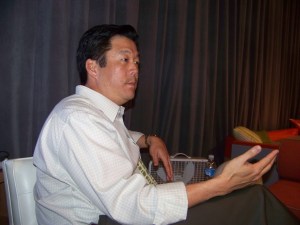 A: We haven’t announced a firm date for Alan Wake or Halo Wars. The stock answer is that they will ship when they are ready.

Q: Are you going to acquire some third-party titles as exclusives, like last year’s BioShock?

A: I wouldn’t say we acquired those. The publishers chose to make them exclusive on the Xbox 360.

Those deals aren’t always business arrangements. It can be very expensive to make a third party title exclusive to one platform when it could be on three or four platforms. You just don’t see it very often. It’s more likely you see things like our exclusive on downloadable content for “Grand Theft Auto IV.” That’s different from the game being exclusive.

Q: Where would you say we are in the console war?

A: Too early to call. Some say Nintendo will win the generation. Really? We’re only in our third year with the Xbox 360. You can’t deny Nintendo their success and their momentum. But I think the generation will go on for quite some time. There is a lot of competing to be done.

Q: What will determine how the war turns out?

A: The winner will have closer to 100 million unit consoles sold, not just 25 million (where Nintendo is now). We still have a long way to go before anyone hits the stratosphere. Our challenge is to get to a mass market. It’s not just about the consoles sold. It is also about the share of consumers’ wallets too. People by far are spending more on hardware, games and accessories for the Xbox 360. It’s a significant lead. We have a healthy ecosystem.

Q: How do you determine how much to spend on games, studios, whether to acquire developers?

A: We’re trying to run a profitable business and at the same time execute on our mission as a first party of showcasing the platform. They go hand in hand. Hits drive the profits. Hits drive the platform. We’ll continue to invest. There is nothing that suggests we are getting to the tail end of the Xbox 360 and so we have to dial down our investment in Microsoft Game Studios. 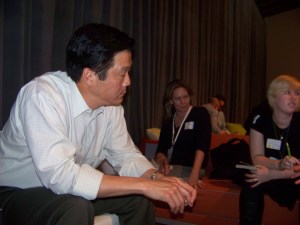 Q: Are you happy that Microsoft didn’t buy Yahoo, so you can instead spend all of that money on game developer acquisitions?

A: It’s a long tail. We will have an opportunity to publish into a long tail with the Xbox 360. By the same token, we will be the first party on Xbox no matter what generation you are talking about. If we were to launch another console in the future, we would have to factor in support for the existing platform. It’s just as important to publish for the existing platform as it is to drive a new one. We’ve never done this before so we’ll figure out how we’ll allocate our resources.

Q: Is it a typical five-year life cycle?

Q: Is it because you have to spend so much to get an incremental improvement?

A: That’s one of the considerations. Companies have to think hard about where their innovations will come from. For us, the differentiation is in the online space with Xbox Live. You might see an innovation in the online space instead of in hardware. That would be an interesting dynamic. We can force a hardware change on customers and developers. There are pros and cons to that. But we are getting to the point where the graphics improvement is only two times instead of ten times. For most people, the fidelity of the Xbox 360 graphics is really nice. Maybe it might be smart to take things in a different direction. Those are very big strategy decisions.

Q: Has the success of the Wii made people think that game play is more important than graphics improvements?

A: There is no question it has made people think. Whether it is the right thing, the jury is still out. You can’t just focus on consoles sold. You have to look at how many games are sold for each console. It’s not very close.

Q: Do you think social networks are stealing time from games?

A: I think that games are stealing time from movies. Our business is very healthy now. We are seeing usage on Xbox Live, if you see that as an indicator, going up. Our platform is pretty healthy.

Q: Could anything slow down the expansion of gaming? The recession doesn’t seem to be doing it.

A: We’re not into the recession yet. The official decision makers haven’t declared one yet. We don’t really know what it would be like in a full recession, so we have to be careful about saying video games are recession proof. 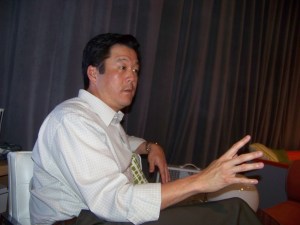 Q: What is the reliability of the machine?

A: Improving dramatically. We took the steps we need to do a year ago. It was difficult step to offer replacements for faulty machines with a warranty extension. We also got to work improving our customer service and improving the quality of the hardware. I’m not going to declare victory on those issues. But I do know we applied a lot of very smart engineers against the issue. We made a ton of progress, given the complexity of the hardware.

Q: Do you have any explanation for the supply shortage of consoles in the last couple of months?

A: We just underestimated demand. We just missed on that. Not by millions, but by a few hundred thousand units.

Q: Do you have a plan to unveil a dramatically redesigned Xbox 360?

A: Not that we’re talking about. Hardware innovation will continue to be a part of our focus. That could be a new form factor, new capabilities. It could be cost reduction. It could be all of the above. We have a continuing investment in hardware, and not just in online or content.

Q: All of the games are looking better. How close are we to hitting the peak?

A: I would not underestimate game developers’ ability to get more and more out of the hardware. People have a lot of experience. “Gears of War” is a great example. Gears of War 2 looks a lot better. I don’t see a reason why it has to stop. It will vary by studio and talent. This is only the third year.

Q: There are a ton of casual game start-ups. Internet Flash-based games. Games for kids.

A: I’m not surprised by that. People are attracted by the opportunities. It’s a low cost of entry. People may be dissatisfied with how console games are a 100-person affair and want to get back to smaller games. Some of our people would like to do more in-house investment in that. That could be done with external partners just as easily.

Q: Your titles tend toward the mature ratings.

A: We have Viva Pinata. But it just happened that way. The developers are targeting their audiences. We do want to spread out the audience. The console is more than just a shooter box. That’s our challenge. We have to get better at telling our story and executing on games in these other areas.

Q: Viva Pinata didn’t sell that well. Was it hard to greenlight that sequel?

A: We do believe in the franchise. We will try to make the game more accessible. We’ll enable people to get into the game more easily and play online. You make mistakes. We want to be right more often than we’re wrong. We hope the other guys will make more mistakes.

A: The majority is focused on the Xbox 360. We still have our PC games.

Q: Did you get your money’s worth out of Rare, which was your biggest acquisition but there have been some disappointing titles.

A: You could say that Rare’s titles have done well for us but some have been disappointing. It’s still waiting for its really big hit. But I am grateful for all of the titles they have done for us. They had two games ready for us at the launch of the Xbox 360. That was very important. They have titles like the sequel to “Viva Pinata” and “Banjo Kazooie” coming.