The New York City company has created a fully 3D map of Manhattan and made it easy to explore. As with any local search engine, you can search for businesses and specific locations, but with UpNext, that’s not really the point. With the ability to pan, zoom, and rotate the city map in any direction and add visual layers to find restaurants, hotels, transportation and recreation spots, UpNext allows you to investigate any neighborhood in the city without having to go there first. It is sort of like a combination of Google Earth and Virtual Earth mixed with a dose of video games, and it has a spotlight feature, which automatically highlights interesting locations as you browse a neighborhood. The layers are more refined than those of Google Earth. So for example, instead of looking generally for places serving food, which can get visually overwhelming, you can refine the search to find only lounges.

It has produced a Facebook app that replicates that map in the social network but adds the ability to tell your friends where you’ve gone, see where they’ve gone, read their reviews, and more. Today, we talked to the company’s four founders, led by Danny Moon. The Q&A is below. 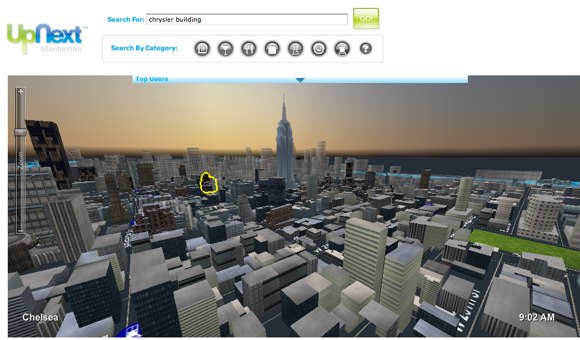 UN: We set out to create a site where search was based on “discovery” instead of “recovery.” Ever been in a neighborhood and wondered, “Where should I go?” You’re looking to discover something new, and chances are that a text box asking you for keywords isn’t going to help you find what you’re looking for. Yet that’s all the current local search engines provide – a system for recovery. Know the name of a restaurant and just looking to find it? Type it into our search box. Want to find what’s nearby that restaurant? Turn on our spotlight search features and discover the area. And we’re not just mapping your city — we’re mapping your city right now. Our hotspot feature allows you to fly over your neighborhood and see, at a glance, what bars are having specials, what new restaurants opened up across town, and more. Your city is alive, our maps are alive.

UN: Like many sites, UpNext was started as a project to fulfill a personal need. [Chief Architect] Raj [Advani] had recently moved to NYC and he went on the web to find sites to help him learn more about this vibrant city. He was underwhelmed by the results. While the editorial content was great, the presentation of information was lacking. So, Raj started working on a prototype for a visual representation of a city. Raj showed the prototype to [CTO] Vik [Advani] and [Chief Creative Director] Robin [Har] and immediately they saw how they could leverage their background in video game development to push the idea towards what it is today. I came aboard soon after when I saw the demo that Raj had created and was convinced this is the future.

VB: Can you tell me a bit about your background?

UN: We are a four person team that were childhood friends and reconnected later to form UpNext. Essentially we are two engineers, one graphic artist and one business guy.

VB: How did you build it with such a small budget?

UN:We were fortunate to start with a team that had the required technical skills to build the site. That being said, it was extremely difficult to develop an in-browser cross-platform 3D engine. We ran into several brick walls along the way (many of which we thought would finish us): little laptops with no memory, cryptic address-space conflicts, Intel video cards, to name a few. We had to be creative and resourceful – like by doing our compatibility testing at BestBuy on their floor models.

VB: Can you give us some insight into how the technology works?

UN: The three key ingredients of our technology are our compressor, our renderer, and our web-engine. Our compressor allows us to rapidly transfer large batches of models (the 40,000 buildings of Manhattan) over to our clients. It takes a polygon soup and converts it into an internet-ready cityscape. The renderer is the piece that actually displays the 3D environment on your browser. We use the Java Plugin here to talk directly to your computer’s videocard to optimize the rendering speed. And the web-engine is the traditional AJAX component that surrounds the map, best for displaying non-visual content.

VB: The site does not seem to play well with FireFox for Mac…what’s going on there?

UN: Java support on Firefox-Mac isn’t yet up to par with other browsers. While Safari, Firefox-Win, IE6 and IE7 all run smoothly, Firefox-Mac has a few unresolved issues. We’re testing out some methods to get around this, and it should also be fixed in the upcoming Firefox 3.0.

VB: Why would someone go to the site and use UpNext or its Facebook app?

UN: UpNext offers a complete local search solution. Users can easily navigate around the city to explore any area – either building-by-building, via categories, or by scanning their friends’ favorites. We wrap a social network around the map because a big part of discovery comes from your friends. If you are going to be in Midtown one day, for example, you can just hover over that neighborhood and with a single click see where your friends have been, what they like and dislike, and what else is nearby.

VB: What differentiates you from EveryScape?

UN: Everyscape is focused on giving photorealistic representations of cities and location. However, their technology is very different. Everyscape takes photos and gives them depth using 2d image manipulation techniques. Our tech provides a 3D model of the city that you can view at any angle and at any height. Instead of utilizing photographs, we’ve developed a 3D canvas that allows us to develop features that help the user visualize the makeup of neighborhoods and streets in ways that haven’t been done before.

VB: Many of the internet giants are already in the mapping space: how will you compete?
UN: We will compete by focusing on specific locations and being the best in those locations. We are going for depth rather than breadth, and, being small, we’re able to rapidly prototype new visualization techniques. Also, there are many internet giants who don’t have any type of 3D/immersive mapping applications. We would be happy to work with them.

VB: What’s the sustainable competitive advantage?
UN: Our technology took two years to develop and to get right. We focus on speed and compatibility. Across the board, we are the most user accessible application of this type. We will be releasing an API in 2008 allowing other sites to embed UpNext cities into their own sites. There are many verticals (real estate, local community, travel) that can significantly enhance their content with an immersive 3D map.

VB: What’s your business model?
UN: Local advertising. We are speaking with local ad networks at this time. There is a lot of opportunity within the local space and a lot of creative opportunities for location based advertising. We’re also exploring licensing the technology.

VB:. But you don’t have a critical mass of users coming to your site, and it’s going to be difficult to get them, given the “good enough” offerings from Google and Microsoft. TechCrunch suggested that your only hope is to get bought by another company. How do you respond?

UN: Isn’t that what people said about Google in the early days when it was just a search bar? In all seriousness, although being acquired isn’t an impossibility, we’ve created a website that is definitely more than a tech demo. As you explore and use the site, you’ll find it to be an extremely rich user experience with a unique combination of features.