Though two U.S. and three South Korean carriers are already rolling out next-generation 5G wireless services, Qualcomm said today at its Snapdragon Tech Summit that 2019 will be the big year for 5G launches across the world. The company expects 20 different operators to launch 5G over the next year, with 18 OEMs making 5G devices that use Qualcomm’s next flagship mobile platform: the Snapdragon 855.

If those carrier and OEM numbers sound familiar, they are, though the 2019 launch date is now much closer than when Qualcomm provided a 5G status update in early February 2018. Back then, 19 OEMs and 18 carriers were on board to begin 5G deployments in 2019, so the number of carriers has gone up by two while the OEM list has dropped by one.

There have been dozens of 5G developments in the subsequent 10 months, including successful ratification of the full international 5G standard, numerous field tests, and even launches of small-scale 5G networks in several countries. But most carriers have been waiting for 5G components small enough to fit in smartphones, leading Qualcomm to introduce two separate generations of 5G antennas, and Intel to accelerate the release of a second-generation modem that could appear in iPhones. 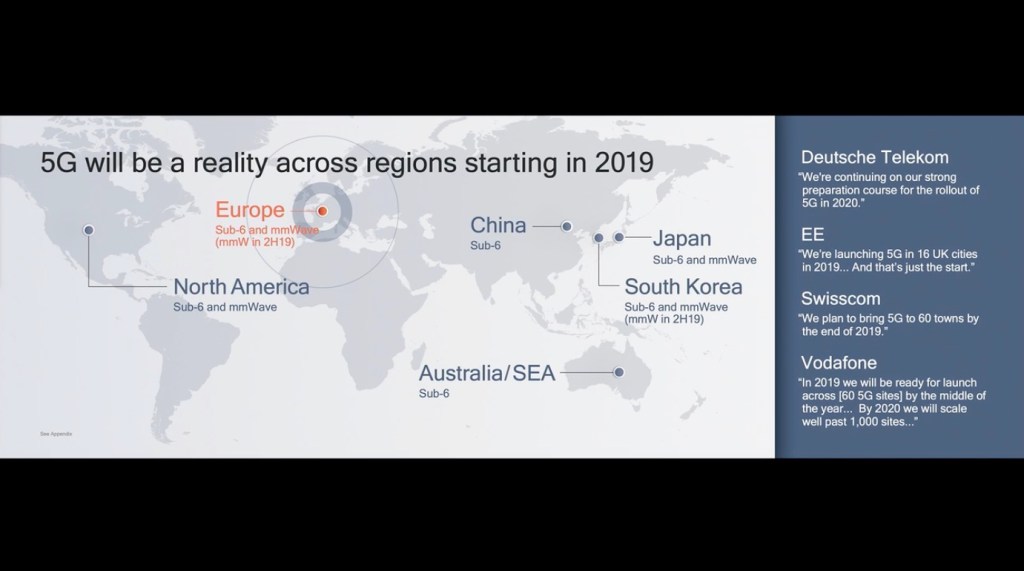 Yesterday, Samsung announced that it would use Qualcomm components in a 5G phone for Verizon, a proof of concept version of which is being shown off at the Tech Summit this week. AT&T today said that it was also working with Samsung to bring a 5G phone to its network in spring 2019. Additionally, Qualcomm showed off a reference phone with live 5G functionality on stage at the Tech Summit, demonstrating that Snapdragon 855 technology can fit into a modern-looking design.

Apart from South Korea, which surprisingly launched three 5G networks on December 1, Qualcomm noted that international 5G networks will be coming throughout 2019 — including Europe, China, Japan, and Australia. In most of these regions, 5G will launch with sub-6GHz radios, but Qualcomm expects that faster millimeter wave technology will come to both Europe and South Korea in the second half of 2019. 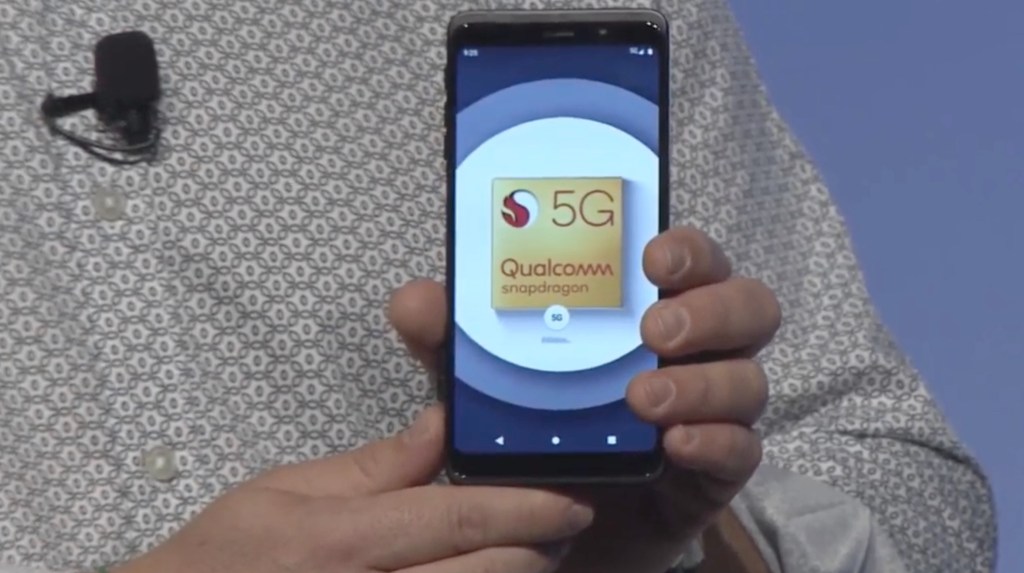 While most details on the Snapdragon 855 platform are being held for official announcement tomorrow, Qualcomm confirmed today that it’s using the 855 name rather than the previously rumored “8150” designation. It is describing the Snapdragon 855 as the “world’s first commercial mobile platform supporting multi-gigabit 5G, industry-leading AI and immersive extended reality (XR).”

According to Qualcomm SVP Alex Katouzian, the Snapdragon 855 will have a fourth-generation, multi-core AI engine with up to three times its predecessor’s performance, the world’s first computer vision ISP core for next-generation photo and video processing, and “Snapdragon Elite Gaming.” It will also support an optional in-display fingerprint scanner called the Qualcomm 3D Sonic Sensor. We’ll have more to share on both the Sensor and Snapdragon 855 soon.