Qualcomm decided to have a chip party today, and here’s the one with the salsa: a new Snapdragon Wear Platform that will power the next generation of wearables.

The world’s biggest mobile chipmaker also launched a new modem for faster data networking and new Snapdragon processors that will make mainstream consumer devices better at sensing, imaging, and communication. These announcements, made during the company’s analyst meeting today, are part of its continuing bid to be at the heart of the most innovative mobile devices of the Internet generation.

Steve Mollenkopf, CEO of Qualcomm, considers these chips an important part of his strategy to win in core markets, such as smartphones, and with core technologies, such as computing and connectivity. He then plans to take these core technologies into adjacent markets, including the Internet of Things, mobile computing (wearables), networking, and cars.

Qualcomm is investing in a few of the largest, most profitable opportunities, including data centers, small cells, and verticals such as health care. 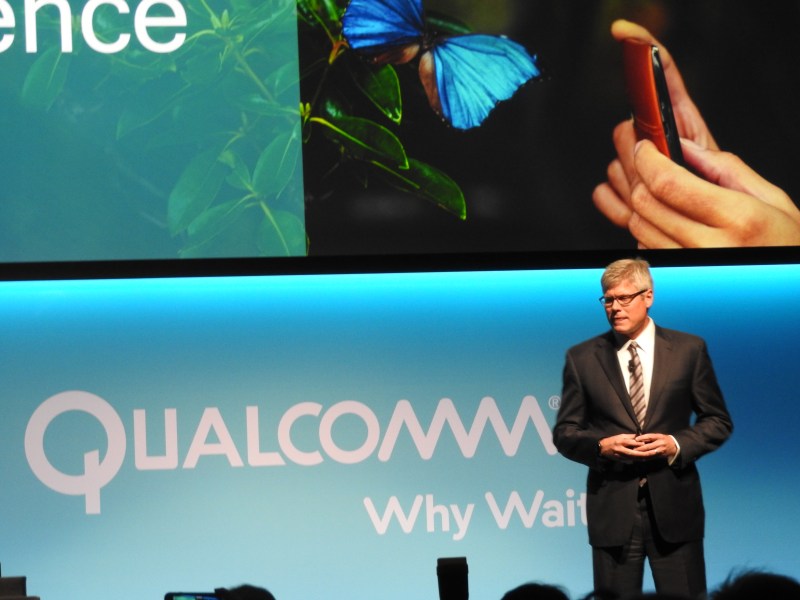 The X16 modem is a gigabit-class LTE chip set that can handle wireless download speeds up to 1 gigabit per second, which is a good deal faster than the slow speed that my T-Mobile iPhone 6 chugs along at when I’m watching YouTube videos while driving.

Kidding aside, the Snapdragon X16 LTE modem enables streaming of 360-degree virtual reality content and faster, more seamless access to cloud-based applications and services. The X16 chip is the first built on a new 14-nanometer manufacturing process, which will spawn a whole generation of smaller, faster, and cheaper semiconductors. The chip will be in commercial products in the second half of the year.

“Qualcomm wins the ‘first to 1 Gbps race’ which is important for bragging rights, but more significant in how much of a lead they have over everyone else,” said Patrick Moorhead, analyst at Moor Insights & Strategy. “From an industry standpoint, at these speeds, you have to question how quickly carriers start beaming the signals to our homes, replacing cable service. Another very important piece of Qualcomm’s announcement is that they introduced a modular modem architecture, which could enable them to either cut their costs by two-thirds with the same output, triple their output with the same resources, or something in-between. I will be interested to see impacts, if any, to Huawei, Intel, Samsung, and even MediaTek. Qualcomm must execute flawlessly on this for it to make a difference.”

Meanwhile, the Snapdragon SOC 625, 435, and 425 chips are processors that show Qualcomm can target multiple segments with the same core chip designs. These chips will take high-end modem, imaging, and sensor technology to more affordable devices. The chips will be sampling to customers in mid-2016 and will arrive in commercial products in the second half.

“The new Snapdragon 625, 435, and 425 are focused on the heart of the Chinese phone market where companies like MediaTek and Huawei are doing well with their chips,” said Moorhead. “Qualcomm is bringing 14nm SoCs to this level, a first, which means they are small, sometimes smaller, and power-efficient, but also meet the dreaded 8 CPU core count many Chinese consumers have enjoyed. While a custom core would be better, Qualcomm is delivering what is currently being asked for.”

The Snapdragon 625 is a 14-nanometer, eight-core ARM-based processor that offers a 35 percent reduction in power consumption compared to the last generation. It has an X9 LTE modem with support for 4G+ and download speeds that are three times as fast as traditional LTE devices.

The Snapdragon 435 has an X8 LTE modem and multimedia and visual features, supporting 1080p high-definition video at 60 frames per second. It has image sensor processors that support 21-megapixel graphics and PC-cla graphics with the Adreno 505 graphics core.

The Snapdragon 425 has computer vision features and an X6 LTE modem, and it will be targeted at China and emerging markets.

Meanwhile, the Snapdragon Wear system-on-a-chip (SoC) and Platform is an all-in-one chip for wearables. Raj Talluri, senior vice president of product management at Qualcomm, said that the company already powers the majority of Android Wear smartwatches with its Snapdragon 400 processor. Now the Snapdragon Wear 2100 SoC will enable wearables with sleeker designs, longer battery life, smart sensing, and always-connected experiences. It will be targeted across the mobile, fashion, and sports ecosystems.

LG plans to use the Qualcomm chip in its next generation of wearables. The new chip is 30 percent smaller than the previous one, has 25 percent lower power consumption, and features better sensors. Qualcomm said that its technologies are already used in 65 wearables in 30 countries, with 50 more expected to launch later this year.

Alex Katouzian, senior vice president of product management at Qualcomm, said in a statement that the company designs all of its chips with scalability in mind, from low-end tasks to those at the high end. That allows the company to deploy custom chips quickly across broad market spaces and at a variety of price points.