Qualcomm has big ambitions for its Snapdragon 835 processor. The company is unveiling more details about the flagship mobile processor today at a press event at CES 2017, the big tech trade show in Las Vegas.

The processor has 3 billion transistors and is built in an advanced 10-nanometer manufacturing process, enabling advances in battery life, computing immersion, video capture, mobile connectivity, and security, said Keith Kressin, senior vice president of product management at Qualcomm Technologies, in an interview with VentureBeat. The chip will serve as the brains of a new generation of mobile devices, from smartphones to cameras. And these devices won’t seem like second-class citizens when compared to more capable desktop or laptop computing devices. 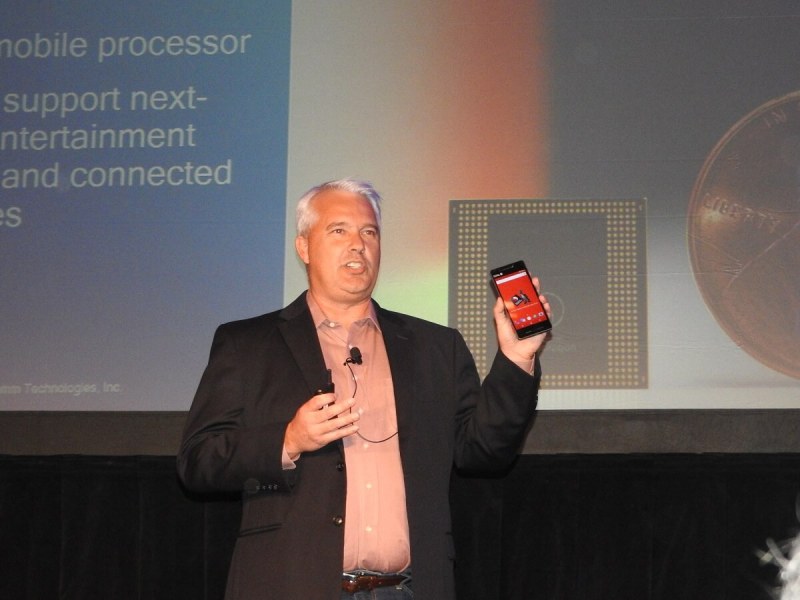 Above: Keith Kressin of Qualcomm shows off the Snapdragon 835 chip in a reference design phone.

San Diego, Calif.-based Qualcomm revealed that the Snapdragon 835 was in the works back in August, and the company is now ready to share a lot more about the chip’s purpose and timing. In fact, the chip is in production now and will start appearing in Android and Windows 10 devices as early as the first half of 2017.

“You’re going to see it in PCs with Windows 10,” Kressin said.

Qualcomm previously launched its Snapdragon 820 processor on a 14-nanometer process a year ago, and the appearance of the new chip on a new process shows that the company is being aggressive about keeping pace with the fastest-moving behemoths of the chip industry. More specifically, it’s trying to stay ahead of Intel, the world’s biggest chip maker, as well as other big companies in the $330 billion chip industry.

“With our flagship processor, we wanted to meet the demanding requirements of mobile virtual reality and ubiquitous connectivity,” Kressin said. “We wanted to improve battery life, immersion, capture, connectivity, and security. These are our pillars.” 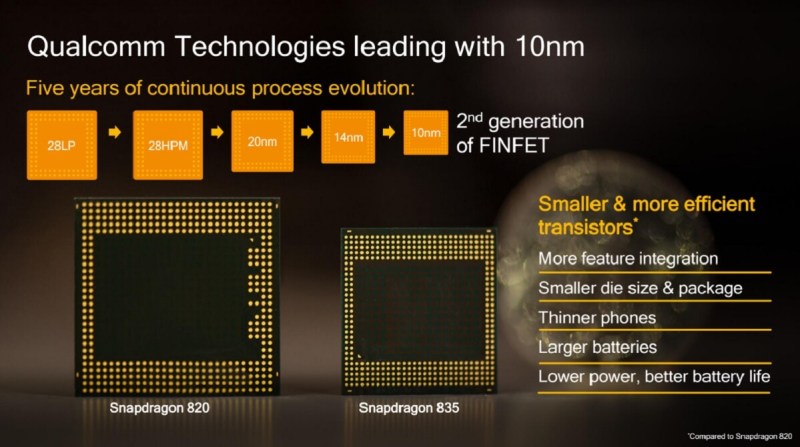 Kressin wouldn’t say which contract manufacturer is fabricating the chip for Qualcomm.

“I expect the Snapdragon to be the highest performance chip for all Android applications in 2017,” said Patrick Moorhead, analyst at Moor Insights & Strategy. “One will be able to touch their wireless integration, either. What I’m very interested in is its performance in Windows 10 and Chrome OS. Windows PCs and Chromebooks would be growth markets for the company.”

The company said the chip is the first mobile chip to use a second-generation FinFET process node, which helps shrink the chip, makes it less expensive, reduces power consumption, and speeds performance. This means the width between the circuits in the chip is miniaturized to just 10 nanometers, compared to 14 nanometers in the previous generation process from a year or two ago. The 10nm process enabled Qualcomm to create the 835 in a package that is 35 percent smaller than the 820 built with the 14nm process.

To take advantage of that process, Qualcomm redesigned the chip, which has a Cryo 280 central processing unit (CPU), to have longer battery life, with 2.5 more hours of usage per day. On top of that, it uses Qualcomm’s Quick Charge 4 technology, which gets you an additional five hours talk time with five minutes of charging. Overall, the power consumption is 25 percent lower.

“We didn’t emphasize peak performance,” Kressin said. “We emphasized battery life and sustained performance. If you put it in a VR headset, it should not overheat.”

What this means is that virtual reality and augmented reality apps, 4K capture and streaming, and gaming will have extended hours of use time when running on mobile devices, Kressin said.

The 835 also has a fully integrated X16 Gigabit LTE modem to provide better connectivity. And it has integrated multi-gigabit Wi-Fi, Bluetooth 5, and integrated 2×2 802.11ac with MU-MIMO, designed to deliver fiber-optic speeds to your phone, wirelessly, where the networks can support it.

The integrated Adreno 540 graphics processing unit has 25 percent faster graphics, compared to the prior generation. The graphics are moving from 8-bit to 10-bit, enabling 60 times more colors, which is good for both VR and ecommerce. It supports q-sync and locking of the GPU rendering engine output, so there’s never a missed frame that could make someone really sick in a VR app. And the 835 will be ready for Google Daydream devices.

“We think it takes off more with mobile VR,” Kressin said. “We think that AR will be bigger than VR, and it follows VR in taking off. There’s a race to shrink the VR helmet as fast as possible. That’s why we emphasized the power and thermals. That’s the key metric for sleek form factors. You still need connectivity and performance. You’ll see sleeker designs with the 835.”

For VR, the 835 supports foveated rendering (which saves on processing power by blurring things that aren’t directly in view) and DSD scene-based audio. VR headsets can use six degrees of freedom, gaze and hand tracking, and reduced latency that shaves a few milliseconds from the response time. 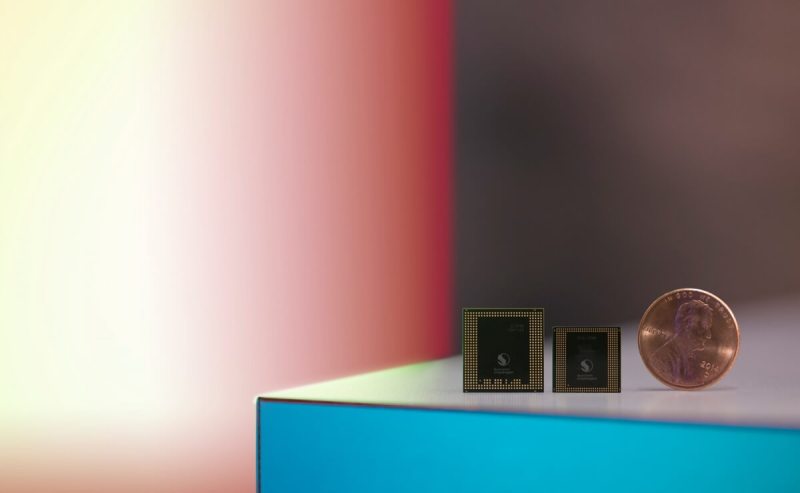 Qualcomm has also integrated the TensorFlow machine learning framework favored by Google. The built-in digital signal processor will run machine learning code. Or it can run on the GPU or the CPU. Meanwhile, the device is programmable for machine learning, as the code for that is changing fast.

“We’ve put more effort from a software framework to efficiently use the cores in the chip,” Kressin said.

For capture, the camera has 32 megapixels of resolution at 30 frames per second with zero shutter lag. It has improved sharpness in all lighting conditions, especially low light, with Qualcomm Clear Sight. And it focuses accurately in fast-moving situations. It also has better zoom and stabilization for photos and videos. And it uses a Qualcomm Spectra 180 image sensor processor (ISP).

“You can now do extremely fast focus,” Kressin said.

The security will be built into the hardware in the form of SecureMSM and Qualcomm Haven. It will protect mobile payments and online banking, using hardware tokens that identify both the device and the user.

And it can provide hardware-based authentication that protects user data from input to the processor. That allows features such as secure fingerprint identification, eye-based and face-based recognition, and voice prints. Qualcomm Haven protects the camera for secure mobile payments and detection of zero-day malware. The system uses machine learning to detect malicious apps.

“If you have android app, it can’t get to the camera, which is in a protected memory,” Kressin said. “It’s secure for mobile payments. At the hardware level, we can collect data on the phone and determine whether it was booted securely.”

The company isn’t announcing design wins yet, but the first batch will be announced in the first half of 2017, Kressin said.