More and more publishers and retailers rely on so-called “widgets,” little boxes placed on other web sites, to deliver their news, entertainment and product advertisements.

So measuring Web traffic to those widgets is important for deciding what content to deliver, and what sites to deliver it on. A number of companies now offer widget traffic measurement tools, with Quantcast being the latest.

Here’s a summary of some of the main players in this nascent but increasingly important field:

Quantcast – This relatively new San Francisco company monitors traffic to Internet sites. Today, it adds a video and widget measurement service, also free. It is still a test version and publishers include Slide, PictureTrail, RockYou, MetaCafe and MochiMedia. It reports on traffic to all Flash-based media, including online games and downloaded desktop widgets. The service reports a widget’s “reach,” the number of times a video has been “played” or that widget has been clicked on, and the categories chosen (a publisher can tag a widget or video as a “game” or “comedy,” for example). It will also report things such as which users clicked on the widget most often (frequency), and the demographics of these users, based on other information Quantcast collects. It provides this information in a pie chart. To use it, you have to register here www.quantcast.com/quantified-publisher.jsp, and more info is here www.quantcast.com/quantified-video.jsp. See chart below.

Clearspring – The company offers traffic analytics for publishers like Time, NBC, Universal and Maxim – which together now have more than 4.2 billion widget views. Last month, the company began letting developers write, distribute and tracking widgets through Clearspring. Like other offerings, it provides a dashboard, and tracks things like a widget’s source domain, number of visits and geography of visitor. Clearstone, like Quantcast, is hands-off on the widget creation process. You’ll need a third-party developer to build a widget if you want one built.

WidgetBox – This company provides a “wrapper” to widget developers so that they can track the widgets. Again, you’ll need to build the widget yourself.

Musestorm -– The company distributes widgets for both the Web and the desktop. Notably, though, this company goes a step further. Other companies put a “wrapper” around the widget and then track that widget. However, they can’t track activity of content within the widget. Musestorm lets you do that -– for example letting you know how many times a video within the widget has been played, and how users switch between surrounding audio and text. Quantcast, Widgetbox and Clearspring don’t offer that. Musestorm also lets you update widget content, adding and removing items, and so lets you track performance of variable kinds of content. Musestorm has a new release coming this summer containing other features. 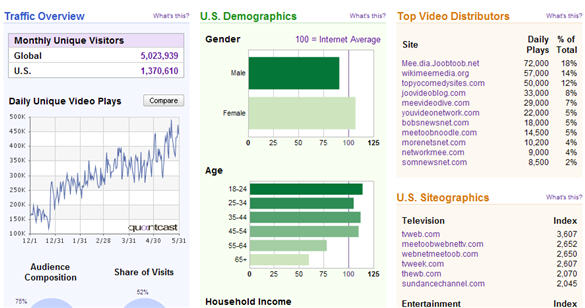