Based on conventional wisdom, Quantenna shouldn’t exist as a startup maker of Wi-fi chips. It has huge competitors among chipmakers Broadcom, Marvell, and Qualcomm-Atheros. But Quantenna is announcing a gargantuan $79 million funding round today because it has figured out how to do Wi-Fi chips that are faster and have greater range than its rivals.

Normally, the big semiconductor companies would use their engineering and financial resources to crush small chip startups. But Fremont, Calif.-based Quantenna came up with a disruptive technology dubbed 4×4 MIMO 802.11n Wi-Fi chip sets, which it describes as so fast at transferring data that the experience is “wire-like” for the user. That is, you can view high-definition video streams on mobile devices with Quantenna Wi-Fi that matches the speed of wired broadband connections in the home.

Wi-Fi is becoming the lingua franca for wireless networking, with the expected marketing growing from 1 billion Wi-Fi-enabled devices in 2010 to more than 3 billion in 2015, according to market researcher Gartner. Video traffic is expected to be about 90 percent of global traffic, according to Cisco’s Visual Networking Index Forecast. But ordinary Wi-Fi isn’t capable of carrying multiple HD video streams at once. Quantenna can do four streams at once, said Sam Heidari, chief executive of the startup, in an interview with VentureBeat.

“We can broaden this market in many directions,” Heidari said.

Heidari said his company can transfer data four times the distance as other wireless chip providers and hit speeds of 180 megabits per second. One of the big uses for Quantenna’s Wi-Fi chips is to transfer video wirelessly in a reliable manner anywhere in the home, allowing family members to watch their own shows on TVs in different rooms of the house at the same time.

He said the company will use the money to expand its engineering and production teams so that it can scale up while still providing support for the major service providers who are using the company’s technology.

Rusnano (which focuses on investments in the Russian tech industry) and Sequoia Capital led the sixth round of funding for Quantenna, while new investor Bright Capital invested new money. The startup will use the money to set itself up as a fabless semiconductor company, or one that designs chips that are fabricated by contract chip manufacturers known as foundries. Rusnano is putting in $40 million of the money, while Sequoia is contributing $20 million.

Prior to this round, Quantenna raised $90 million in funding from Sequoia Capital, Venrock, Sigma Partners, Southern Cross Venture Partners, DAG Ventures, Swisscom Ventures, Grazia Equity, and Telefónica Digital. All of those investors participated in the new round.

“A number of major service providers say they are going to use us in the upcoming generation,” Heidari said.

A faster generation of Wi-Fi chips, dubbed 802.11ac, is coming either late this year or next year. Heidari said his company will be able to handle that new standard protocol and do it faster than its rivals can, roughly doubling its speed to 360 megabits per second.

Rusnano’s managing director, George Kolpachev, will become a member of Quantenna’s board of directors, and Rusnano investment manager Vladislav Tropko will become a board observer.  Quantenna will also open a Russian subsidiary. Quantenna’s claim to fame is that it was the first to introduce a commercially available, standards-based 802.11n 4×4 Multiple Input Multiple Output (MIMO) chipset. It also does dynamic digital beamforming, low-density parity check, mesh networking, and channel optimization. That means it can do fancy things — like using math calculations to figure out how to cancel noise in a wireless channel — to speed the transfer of wireless signals. The company has worked on its technology since its founding in 2006 and it has 120 employees. 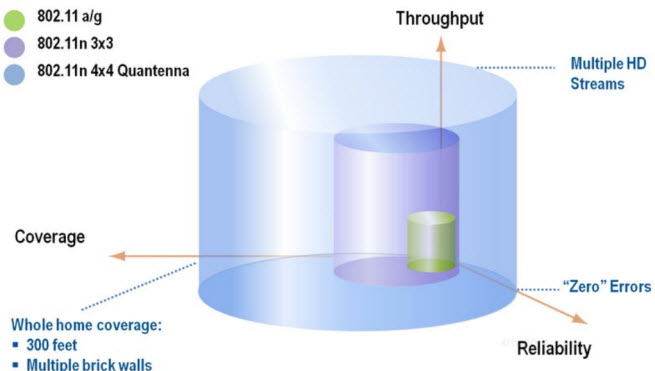