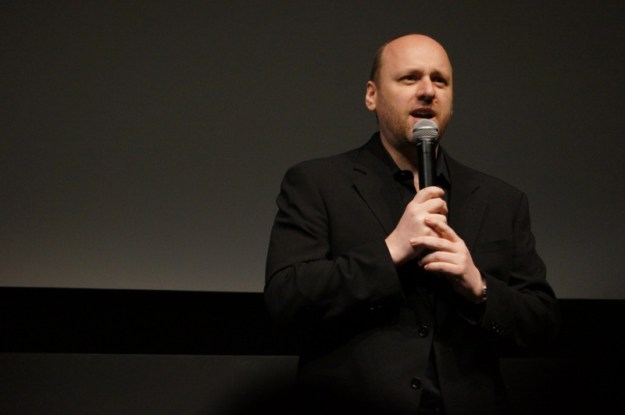 Beyond: Two Souls made a big splash at the Tribeca Film Festival this weekend with the premiere of a new trailer and more than 30 minutes of footage. Shortly after the screening, I chatted with Beyond’s director and developer Quantic Dream’s founder, David Cage.

Since he’s already done dozens of interviews about Beyond: Two Souls already, I focused more on questions around his storytelling growth, the deeper meaning behind Beyond, and his controversial comments around the state of the gaming industry. I also couldn’t help but ask if he’d ever want to direct a film.

Check out the full interview below.

GamesBeat: What was it like showing off Beyond here at the Tribeca Film Festival? This is a first right?

David Cage: Oh, yah, it’s the first time a video game is a part of an official film selection at a film festival. [L.A. Noire also appeared at Tribeca in 2011. I forgot about this little tidbit, and I assume Cage did as well –Ed.]

It was a great pleasure and a great honor to be here. It was just fantastic. We work on creating bridges between films and games for 16 years. So being here just shows that it’s something that comes true. It’s very exciting.

GamesBeat: Did you ever think this would happen back in the Indigo Prophecy days?

Cage: Oh, no. No, no — not at all. It came really as a surprise, even for us, even today. … I was also really surprised to see the enthusiasm that there is here in the festival and with the audience. This audience was really curious about what we were doing. There were some gamers in the theater, but there were also some movie buffs. People were just curious to see this new form of interactivity and storytelling.

GamesBeat: How have you grown as a storyteller, as a director since your last few games? I see a direct progression in skill.

Cage: I try to get better at what I’m doing, game after game. But I’m learning, I’m still learning. When I started I wanted probably to make games that were inspired by films that I liked. So if you think of Indigo Prophecy, or even Heavy Rain somewhat … .

But Heavy Rain was for me a big turning point, because it was the first moment where I realized I could write about things that were more personal. I didn’t have to write about superheroes saving the world. I could just write about a father wanting to save his son and things that were closer to my personal life.

I think the difference between Heavy Rain and Beyond is that Heavy Rain still had a lot of references to films. Especially in the mood and it was a dark thriller … where in Beyond we tried to create something truly original and doesn’t refer to anything.

GamesBeat: Do you feel more confident now as a storyteller? You’re doing it more as a game lifting what you need from movies, instead of trying to be like movies.

Cage: It’s about confidence, it’s about also what I realized on Heavy Rain — when you talk about something personal it makes … it could make an interesting story, or at least a story that would be appealing to others. And I saw how players responded emotionally to Heavy Rain was absolutely amazing… You see the emotional response that you can get when you’re sincere in your writing, and when you write about something that matters to you.

GamesBeat: How do you write around the danger of the “Choose your own adventure book” gimmick?

Cage: Well, for me each moment is unique in the story, so I don’t work on mechanics really. I don’t have a set of rules that I define at the beginning and I just use them in the course of my story. It’s really like every second of the game I try to reinvent the rules and say, OK, this is the story I want to tell, this is the moment I want to create, what is the best possible way to interact in this scene and to play it and make something meaningful?

So it’s very challenging to write, because in each scene you need to reinvent yourself. But at the same time, it creates, I hope, an experience that’s really different and unique, that really comes out like a journey where you never know what to expect next.

GamesBeat: Would you ever consider directing a film?

Cage: Honestly, I don’t know where I want to go with my career right now. I never thought about it like … I don’t have a plan for where I want to be in five years or 10 years from now. And I know that making films has never been a goal for me, so I’m not making games in the hope that one day I’ll make a film. But it’s something I may explore at some point, because working with people like Ellen Page and Willem Dafoe has been an amazing experience.

GamesBeat: It would actually be less work for you to make a film.

Cage: It would be a different work. I’m really cautious about this because I have a lot of respect for cinema. And I know where we are, and I know where the best filmmakers are, and there’s a huge gap. I still feel I have a lot to learn before having something meaningful to say in a film. But, yah, this is something I’ll start thinking about.

GamesBeat: Your game is called Beyond: Two Souls. There seems to be something very metaphysical about it. How do you define the soul?

Cage: Working on Beyond I try to give an explanation to death that’s different from the explanation religions have to give. So I made up my own story around all this, and how life and death and souls work. So I don’t want to reveal too much of this now. But I think my story makes sense, in that aspect of telling how life and death work together.

GamesBeat: I know you’ve talked about how a lot of games right now are really focused on shooting. It seems almost as if gamers are defensive when you bring this up.

Cage: Well, I said what I had to say at DICE, and I don’t know if I should elaborate on that.

But, yeah, the game industry can be very conservative in some ways. So people want more of what they already know, but I believe games can also explore different directions.

And I’m not against shooters, I’m not against all these things. There’s a market for this, and people enjoy it. That’s fine. I’m just saying, why not explore in different directions. So we’ll see. I mean this is something happening right now, whether some people like it or hate it, whether they scream on forums or not, it’s happening.

So there are different people trying different things, and there are people playing these games. And if you look at the success of different games and how the market evolves right now, you see this. Some gamers become older; they want different types of games.