Quantum Tech Partners, a gaming-focused advisory group for financial deals, said in its first report that folks and firms invested $1 billion in the esports industry in 2019.

Founded by M&A advisory experts Jim Perkins and Alina Soltys, the firm is also far more bullish on the outlook for esports revenues, as it expects the industry to reach $4 billion in revenues by 2022, far more than $2.96 billion predicted by Goldman Sachs and $1.79 billion predicted by market researcher Newzoo.

I interviewed the founders (who are based in Seattle and Scottsdale, Arizona) of Quantum Tech Partners recently about their views on esports. They formerly worked together at the Corum Group, which also focused on game M&A, and now they are turning their expertise to both gaming and esports deals. 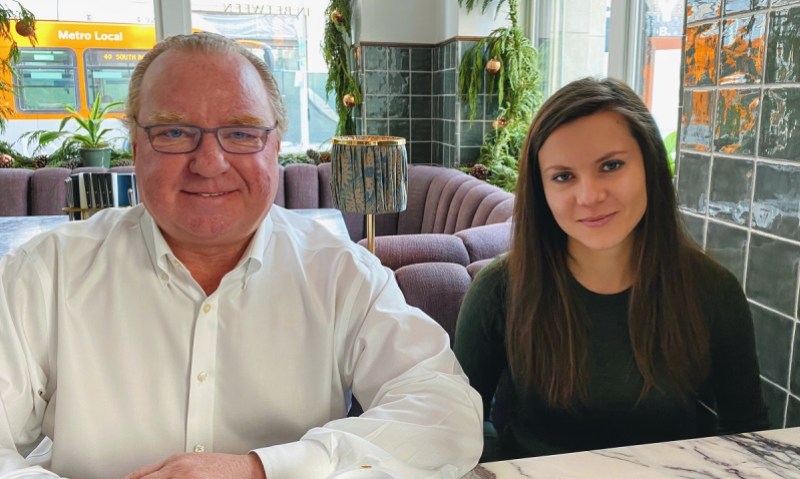 GamesBeat: Can you start with explaining what Quantum Tech is and where you’re positioning the company?

Alina Soltys: Quantum Tech Partners is a gaming-forward tech advisory group. Where we started — from the perspective of working directly with gaming studios, esports companies, gaming technology platforms, helping entrepreneurs and founders manage their teams, think about how to strategically grow, for ultimately impacting their exit opportunities and options. Ideally, where we fit in the grander scheme of the ecosystem is helping companies grow and also execute on significant financing, as well as full exit opportunities through M&A or majority acquisition.

Our perspective in the space comes from gaming and technology. In the founding team here we have many decades of experience working with gaming companies. We’re super passionate about the gaming space and we have deep expertise and deep relationships across the globe. We also have experience working on the transactions that have mattered the most to a company’s overall history and trajectory, helping founders think through that. We’re overall proponents for the industry to continue to drive innovation and the right partnerships that create greater opportunities for the companies involved.

Jim Perkins: We’re into the current disruption of the games industry right now. It continues. It’s generating a lot of opportunities for game development studios, technology platforms, and publishers. I haven’t seen this kind of disruption since the ‘90s, when we were working with some of the first-person shooter guys like Epic and id and 3D Realms. That got Alina and I excited about working together and having the flexibility to provide value to the game industry as a whole.

We’re very passionate. We’re very big fans of independent studios. We wanted to fill that gap. We don’t see that kind of provider bringing services to the industry. Either you’re an agent or a research firm or whatever. But we wanted to go deeper and provide a higher level of experience and access to industry leaders for our partners. 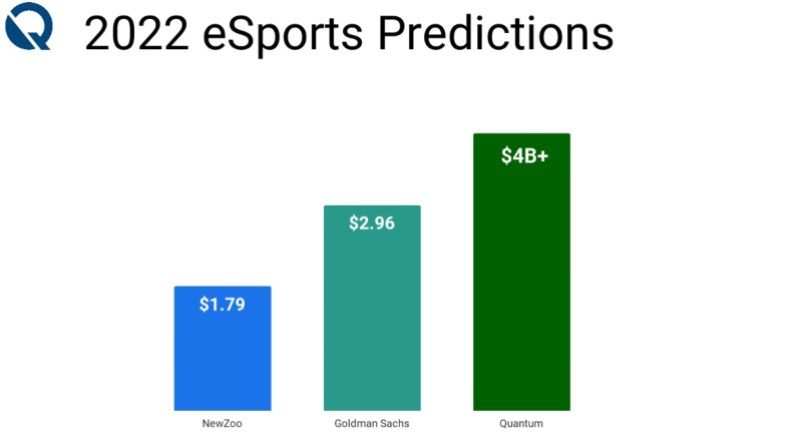 Above: Quantum Tech Partners is optimistic about esports revenue growth.

GamesBeat: If we look at the different parts of the game industry, is there a sector that you see as the most active when it comes to the kind of disruption that can result in financing or M&A?

Soltys: The area that’s getting the most attention is esports, within gaming. We have some specific data that talks about esports as a subset. I believe it has a lot of perspective from a funding side of things. We know almost a billion dollars went into esports as far as funding alone. As we’re starting to hit a cycle where those companies are becoming more mature and starting to develop valuable business models, as well as tech, the acquisitions pick up thereafter.

From an M&A perspective, last year we saw 33 esports deals completed. Right now there’s a lot of interest and focus on the teams, either growing teams geographically or across multiple games. That has the highest level of interest, both from investors as well as–that was about 40 percent of the deals done last year.

But if we look at it more holistically, there’s also a lot of great investment going into the underlying infrastructure that’s incredibly important to have available, both for engaging players and measuring what that engagement level is. From a distribution perspective, having the tech–Twitch and Facebook Gaming and YouTube and Mixer have really solid ways to distribute, but there’s also more to that. Layering on all the added services.

There’s a lot of unique ways to slice and dice the esports industry, but from a gaming perspective, that’s definitely impacting the development of esports companies, where they’re starting to think about how to build platforms, how to build players, how to engage with an audience that might be outside of a game or thinking about your game in some way, and have a community that goes beyond just the gameplay in an individual session. We think it’s a positive.

Part of the disruption that’s happening is also just a factor of what’s going across the broader industry. There’s a lot of great new studios and a lot of new technology that has to come up and support that element of growth. A lot of investors are coming back into the fold thinking about gaming not just as a subset of entertainment, but really the biggest entertainment segment that we have today.

Perkins: A couple of other things we’re seeing in the marketplace–one is that there seems to be–in 2018 there was a bit of a lull in the Asian buyers that were coming to the market. At the end of 2019 we saw a lot of activity in that marketplace, and we’re seeing that right now. We have a number of discussions with studios and publishers and buyers in Korea and China that are becoming extremely active. There’s obviously many mega-deals happening, or at least pending, in the industry. That’s very exciting.

As Alina mentioned, you have the esports side of it, which is very exciting. The fact that there are multiple distribution channels coming about, that gives the independent studios a choice of where they’re going to distribute their product, gain market share, and access user acquisition. That’s exciting. There’s nothing better than good competition there. That’s generating a lot of disruption in the marketplace. Epic has planned on doing that, and they’re doing a good job of providing opportunities.

What we want to do is provide flexibility in terms of how we work with studios and with the industry, in terms of what works for them, how they can increase value through all the choices they have right now. Especially in the international market. 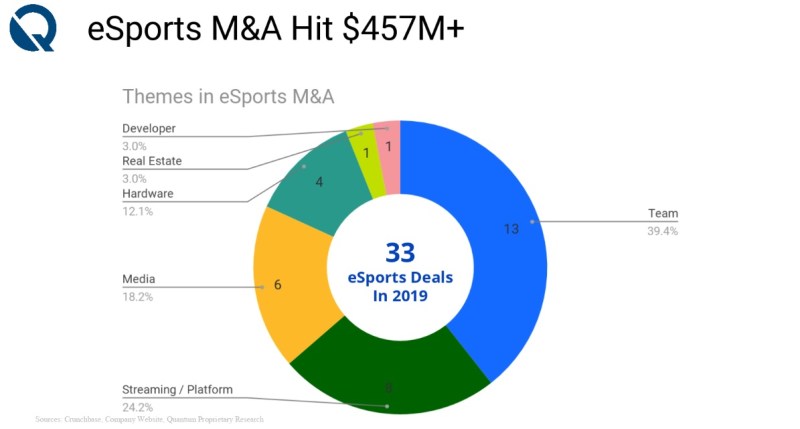 Above: There were 33 esports acquisition deals in 2019.

GamesBeat: The 33 deals in esports, what sort of context is there to that? I imagine that the year before, 2018, would have had less activity and fewer dollars involved. How does that compare to activity in the whole game industry?

Soltys: From a broader gaming industry perspective, esports is about 20 percent of total gaming M&A in 2019, based on our proprietary research. That’s in dollars. What was funny about 2018 is there were three mega-deals there. You had Epic raising $1.25 billion, and you had both Douyu and Huya getting pre-IPO types of additional Series E and F financing. That skews the results for the year.