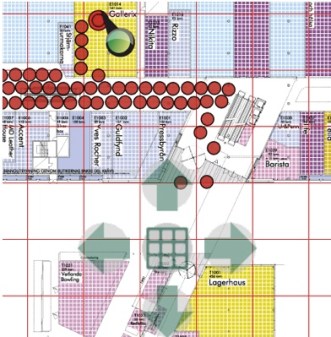 Like many people I have an addiction to Google Maps on my phone, so a world where GPS capabilities can follow me indoors has me curious. Qubulus makes accurate indoor positioning possible with its Qubulus Positioning System (QPS).

The young startup, based in Malmö, Sweden, got some exposure this week at the Global Mobile Internet Conference’s G-Start Up competition in Beijing, where it was picked as one of 20 startups to pitch an audience of China’s top tech players. The company is trying to get exposure in Asia and is working on partnerships with augmented reality and mobile enterprise service companies in China and Singapore.

The technology has strong commercial possibilities in retail. Using QPS, a developer could build an augmented reality application that could provide additional information about products in a store. Take this concept and carry it forward to finding booths at trade shows, touring through museums and improving employee workflow.

Qubulus demoed the technology this week in Beijing. Using a technology called “radio fingerprinting”, it allows a mobile phone to listen to radio signals from surrounding networks. The unique signal strengths are then used to identify a specific spot indoors. Once you build up a grid of those spots and link it to a map this creates positioning which is accurate to three meters, which is better than anything currently on the market.

Google and Apple are both in the positioning game and have both recently come into the news for collecting our personal data to improve their location abilities. They are gathering location information to build massive databases capable of pinpointing people’s locations via their cellphones. These databases could help them tap the $2.9 billion market for location-based services, which is expected to rise to $8.3 billion by 2014 according to Gartner. Generally, when companies have collected data from users it has been from personal computers. The data gathered through this medium can be tied only to a city or area code. The rise of internet-enabled cellphones allows the collection of user data that is much more personal and can be tied to locations on a more granular scale.

What sets QPS apart from the competition is that its technology not only works on a horizontal axis but a vertical one as well. This means that you will know what part of the skyscraper you’re in and what floor you’re on, since the vertical positioning is accurate up to one meter. Current methods use triangulation and are accurate to 10-20 meters, which isn’t helpful, since there could be many walls between you and your destination.

Qubulus said it is attempting to minimize the impact to privacy if someone were to hack into the system. It is doing so by using historical data without unique phone identifiers. It analyzes this data to see how a group of users acted in a specific location. Analyzing batches of historical data lends itself to use pattern recognition rather than the ability to target your location. Plus your data would be a part of a group, so an individual could not be identified. However, carriers are still looking to exploit the same location abilities that Google and Apple are trying to create. The carriers that Qubulus is in pilot programs with have asked for real time data from phones, but this will be opt in.

The inability to opt in or out of location-data collection on Apple’s iOS and Google’s Android platform is why Google and Apple have been getting into hot water with privacy pundits lately. Using historical data lends itself to analysis, since it has nothing to do with where you actually are. The temptation with real time data is push advertising. Using current data provides the ability to push or pull information from your current activities.

Qubulus currently has two pilot projects going with carriers in the US and UK.

Location-based services have already grown into a billion dollar industry, and since 70% of cellular calls and 80% of data connections originate from indoors, having a more precise positioning technology that works indoors will become increasingly more important.