SAN FRANCISCO — Quid, a startup selling software for analyzing large piles of news articles and other Internet content, is getting used in some surprising ways. Like figuring out what went wrong in Rep. Bruce Braley’s campaign for the open Senate seat in Iowa.

Bob Goodson, a Quid cofounder and currently its chief revenue officer, has recently been pulling out his iPhone and showing people a slide deck that charts the sudden decline in the likelihood that Braley would beat Joni Ernst in the race.

Accompanying that chart is a bar graph showing a spike in the number of articles about Iowa and former presidential candidate Hilary Clinton. Taken together, the visualizations suggest an interesting connection: Clinton’s public appearance in the state, during which she talked about women’s issues, and the unexpected rise of Ernst, a woman, in the weeks leading up to the election. The observation resulted from an exploration with Quid.

While that’s not your everyday Quid case study, it does point to the applicability of the software, which aligns nicely with the progress the 4-year-old, 65-person startup has been making.

Quid has found itself working with more than 60 customers, including Cisco, Bloomberg Beta, Hyundai, Microsoft, and Vivaki. As the customer count has gone up, so has the quarterly revenue tally. And when you consider Goodson’s optimism, you start thinking that maybe Quid will be a company worth tracking.

Goodson thinks that, just as Adobe has been the go-to software for creatives, Salesforce.com has provided the key app for salespeople, and Bloomberg has long been the definitive software provider for financial analysts, Quid can become the top dealer of software for people in corporate strategy.

And that high hope is cleverly reflected in Quid’s pricing.

“A Quid license costs as much as a Bloomberg terminal — $24,000 a year for a license,” Goodson told VentureBeat in an interview. 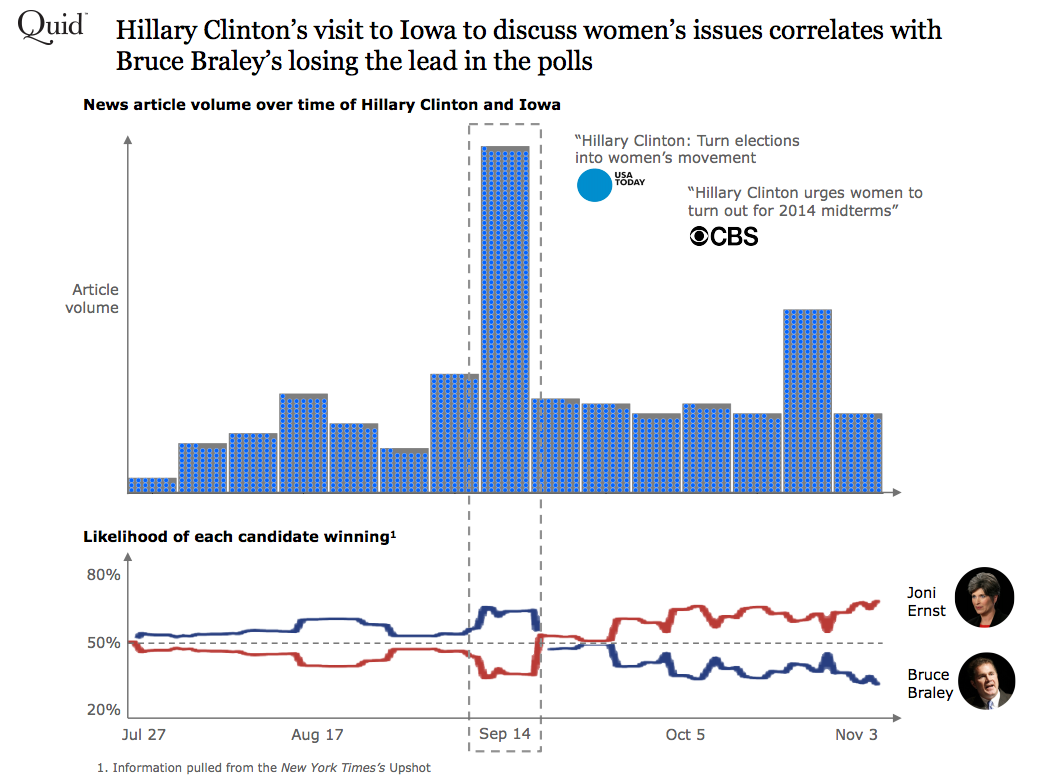 Above: A slide from Goodson’s deck

Goodson, who has worked in Quid’s chief executive role and was previously the first employee at Yelp, wouldn’t provide the full customer list for public disclosure. Even so, the startup does appear to be signing up more and more big businesses as customers in industries like technology, marketing, and financial services. And there are outliers — like government agencies.

All this isn’t hard to believe when you get a sense of how Quid speeds up the process of doing research.

For one thing, Quid aims to be comprehensive and up to date. Every day, Quid indexes 1.2-1.5 million articles from 50,000 English-language news sources into its software.

Then it extracts entities — such as people, places, industries, and keywords — from those articles, and finally it compares every one of the articles with every other one it takes into consideration for a particular query. It identifies a few high-level categories for all articles being evaluated for a query, and it’s easy to zoom in on those clusters as well as explore anomalies.

You can chart them out over time and see which ones have the highest word counts, picked up the most social shares, or bear the most similarity to other articles. And, of course, you can follow links to actually read the articles.

Blogs can be incorporated into searches alongside or instead of news articles. And tweets could be the next data land grab.

“The goal is to index one data set after another,” Goodson said.

In holding fast to that ambition, Goodson might sound like a lot of other tech startup founders who want to integrate with several data sources. But this is not just another tech startup we’re talking about. Quid has designed a fresh interface for a problem anyone who’s ever been on the Internet has bumped up against: There’s a lot of information out there, and it’s hard to feel confident that you know pretty much everything there is to know about a subject.

Sure, there’s Google, and for articles, you’ve got LexisNexis. But if you want to hone in on a person, a company, a concept, a time period, or simply an influential article, the visualizations that Quid has come up with can be quite helpful.

Taking it for a test drive

Goodson ran several queries to show off Quid’s capabilities. He searched for articles about Uber and women, and he also took a look at the connection between sugar and regulation. And then, like any self-respecting startup guy interested in bringing in more business, he thought up some ways that the company he was currently meeting with — VentureBeat — could use Quid.

It helps that Quid’s software’s user interface has improved considerably. Here’s how it looked back in July 2011, when Quid was announcing a $10 million funding round: 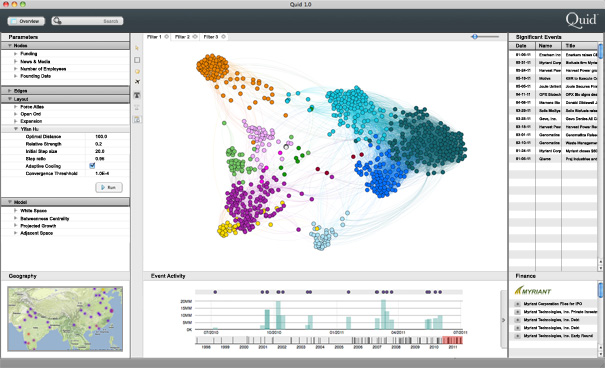 Quid’s current look and feel, with the colorful nodes and edges in its graph visualizations, calls to mind the cool factor you got when you looked through a powerful microscope in biology class in college. You find yourself confronted with a lot of detail, and it’s pretty to boot. Above: Some of the articles Quid pulled up when I searched for “deep learning.”

It’s also interactive. After generating a visualization of news articles about deep learning, I was able to narrow my focus and see which companies got the most attention, as measured by social shares of the articles. The results weren’t surprising. 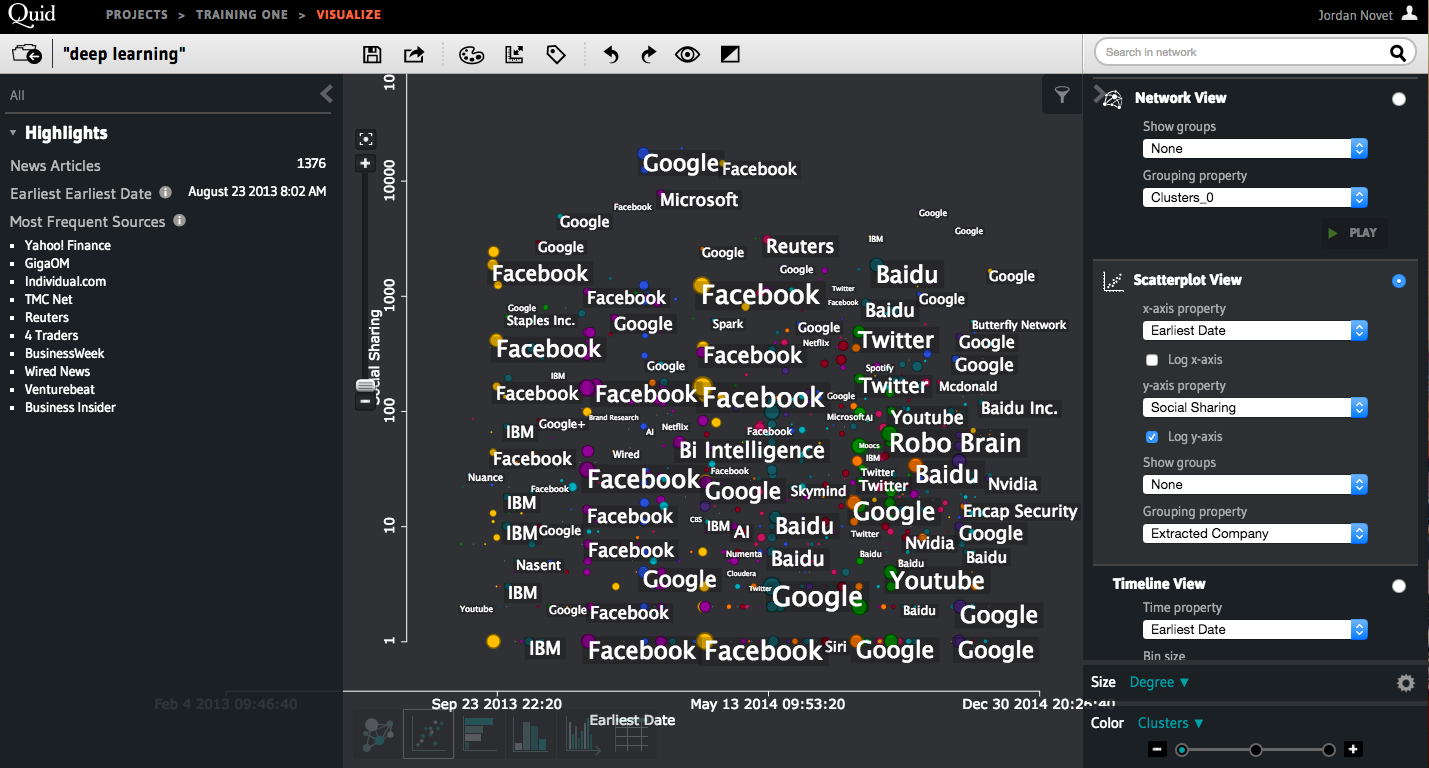 Above: Look at all those Google and Facebook references.

And maybe that’s not such a bad thing. I became confident that I knew a good bit of what there was to know about recent deep learning advancements, particularly at Facebook and Google.

And if you’re wondering who the key people are in all the coverage, Quid has you covered. This visualization in particular proved educational for me, as it came up with some names worth paying attention to. 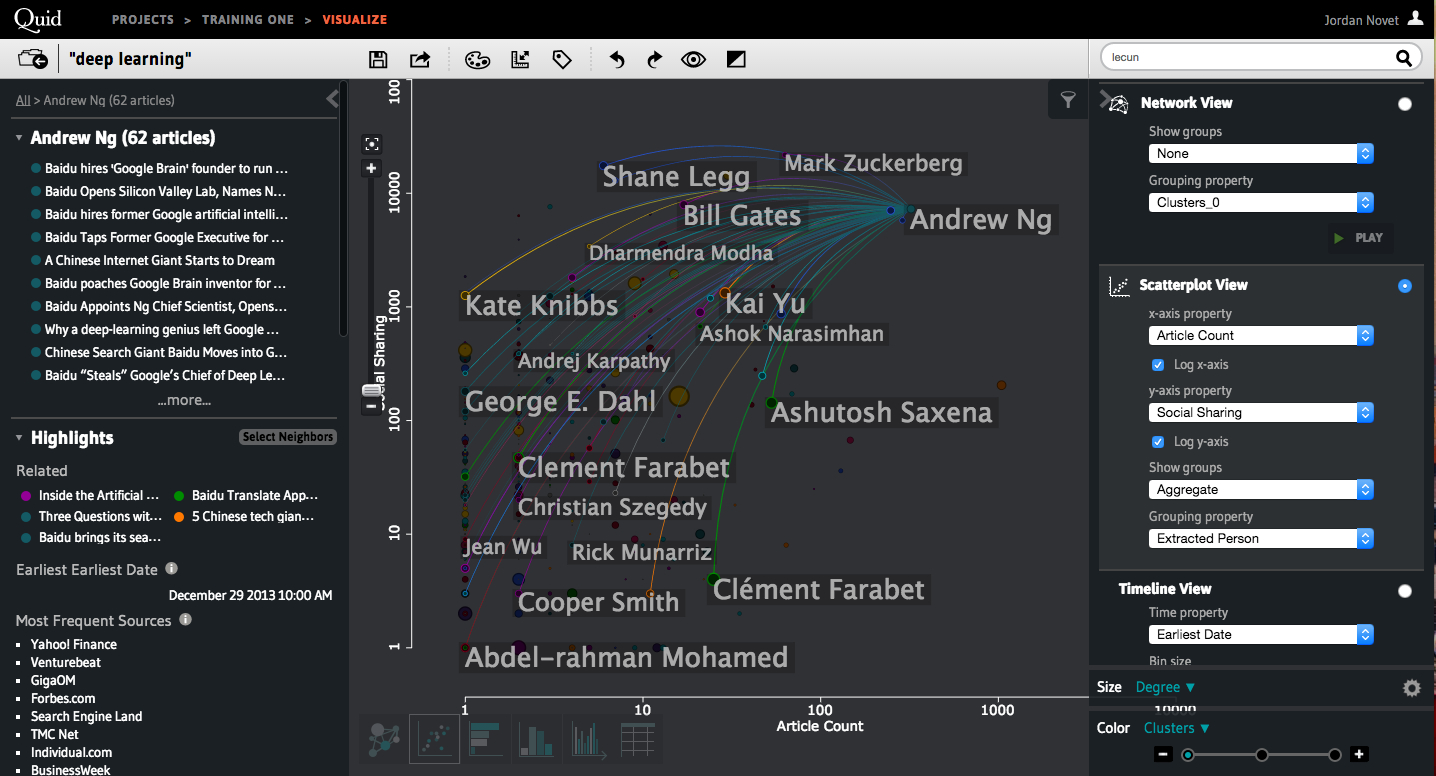 Above: Key names Quid pulled out of articles about deep learning.

Sure, the application has shortcomings. The software is limited to English-language searching. There is no way to set up alerts for new articles that fall within the parameters of previous queries. As yet, there is no Quid mobile app. And — how could I forget? — it’s not cheap. But as more companies log in to Quid, and as more types of employees see Quid’s capability and become convinced the software could help them, each of these problems could well be solved in time.

Certainly Goodson believes the startup is onto something.

“We are doing something different that hasn’t been done before,” he said.