At the recent Oculus Connect event, some virtual reality applications didn’t fit into any category. Quill was one of those, part interactive comic book, part VR film, and part VR creation tool.

It’s not really a game, but it has an interesting story that begins with a 360-degree short film, Dear Angelica, which was unveiled in unfinished form at the Sundance Film Festival.

The art style in Dear Angelica is like a painting, because that’s what a memory seems like, said filmmaker Saschka Unseld, creative director of the Oculus Story Studio, in an interview with VentureBeat. Quill takes you inside the world of the painting, allowing you to see it from different angles and fill out the details with vivid colors with the swipe of your hand. You can also create your own original drawings. It reminded me of other VR art tools, such as Google’s TiltBrush and the sculpting Medium tool from Oculus.

Quill started as an in-house VR painting tool to enable the illustrative storytelling in Dear Angelica. Since completing Dear Angelica, the Story Studio team is working on polishing Quill so it can be shared with the world and allow anyone to tell their own stories using the tool.

“We were determined that the tool had to be comfortable to use for hours so you could tell more complex stories and art,” said Edward Saatchi, producer at Oculus Story Studios, in an interview. 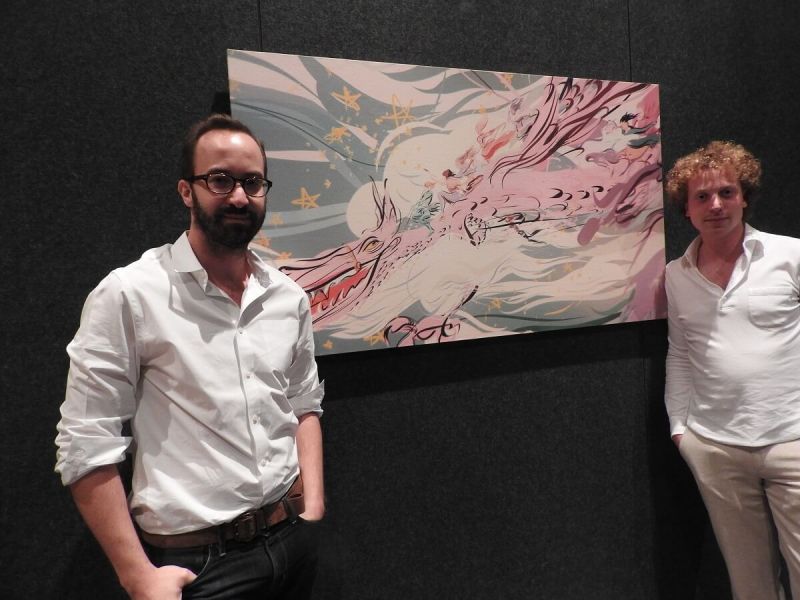 The Oculus Story Studio won an Emmy in September for the VR animated short Henry. As for Dear Angelica, Unseld, creator of the Pixar short film The Blue Umbrella, said the story is about Jessica, who is Angelica’s daughter, looking back a stories she heard from her mother as a child.

“It’s about the memories she has of her mom,” Unseld said. “It’s a lot about storytelling and the things we believe in the world for other people to see. If you hear a story from your parents, it becomes part of you. It’s a mother-daughter relationship, and most of it takes place inside the girl’s memories. The art is about how memories look.The closest we can ever get to what memories look like is a painting.”

“We wanted her technical voice to come through,” Unseld said. “We wanted her to create in VR. So we started creating Quill for her. When we set out to do that, the crazy thing was we didn’t know it would work. The story is complicated. It is visually experimental. A lot of the character is a based on actresses I’ve admired over the years.”

When the team approached actress Gina Davis to play the role, she went through the VR prototype and was moved to tears. So she signed up to play the voice of Angelica.

“There’s a twist in the story where it becomes more personal and serious and sad, and she just stopped talking,” Unseld said. “She was in tears and quiet to the end. When she came out, she said, ‘What do you want me to do?’ That was the moment when we saw other people might like this.”

Oculus aired the 30-minute film at the Sundance Film Festival. It hasn’t said what its future plans for showing it are. Quill is coming for the Oculus Touch and Oculus Rift headset, but the timing isn’t set yet.

Unseld said that comic book artists are using Quill in an experimental way to tell sequential stories, where the art fills out in the screen little by little. While Dear Angelica took a big team to create, Unseld hopes that just a writer and artist can create stories with Quill in the future.

“The art is fascinating, but you want to tell stories,” he said. “It does watercolor well, but you can choose your style. It is non-opinionated when it comes to style.”

He added, “It’s different from a comic in the real world, which is a page and a frame. Here, you can walk around in it. The way we think of VR comics and Quillistrations is something new.”