Quirky, the maker of the Pivot Power, is raising more money to build the future of weird connected devices.

Oh, and let’s not forget General Electric, which contributed a huge $30 million to the round.

GE’s involvement is a part of a larger partnership with Quirky, which recently introduced products like the Egg Minder (a smart egg tray), the Nimbus (a smart dashboard), the Spotter (an all-in-one sensor), and a more advanced version of its popular Pivot Power power strip. 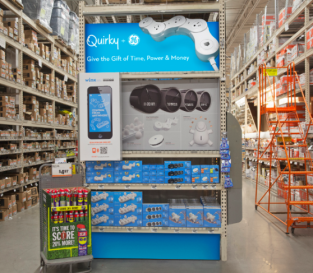 And that’s just the beginning. Quirky’s deal with GE will result in another 30 devices over the next five years — and 12 in 2014 alone.

The funding is a big deal not only for Quirky, but also for GE, which has been chasing its own connected devices strategy as of late, largely on the “industrial Internet” side of things. The Quirky partnership, in contrast, is more consumer-facing and has already resulted in products hitting the shelves of Home Depot and Best Buy.

Quirky and GE are, in that sense, perfect for each other. With the deal, Quirky gets access to GE’s expertise and patents, and GE, a corporate monolith, gets to tap into the exciting, zany world of consumer hardware startups.