Veteran game designer Sid Meier delivered the keynote speech at the Game Developers Conference today and during his hour-long session on the “Psychology of Game Design: Everything you Know is Wrong,” the creator of the Civilization franchise produced a series of key points, mantras, and worthwhile quotes captured here. Meier is the creative director at Firaxis and director of this fall’s Civilization V. (You can catch the full news story here.) 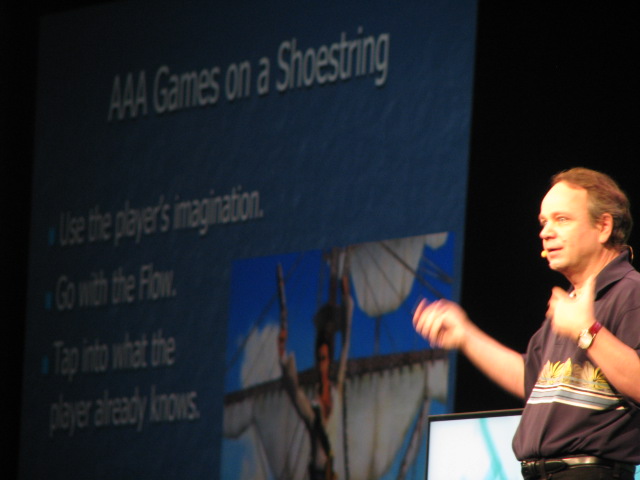 “Gameplay is a psychological experience: I base my games on things like railroads, pirates, and history, and I try to make the games I design true and real. The more historical, the more realistic, and the more factual, the better. The more railroady and piratey, the better. But what I thought I knew was wrong. During the early days of my career, I hadn’t taken into account what was in the player’s head. By acknowledging that simple concept–that gameplay is a psychological experience–it can make your games better.”

“People who play games are egomaniacs. It says on the box you get to control armies, discover new technology, and create entire civilizations. So, right away, you’re an egomaniac.”

“Games produce a ‘winner’ paradox. In real life you don’t always win. Only one football team gets to win the Super Bowl each year, all the others lose. In games, you always win. I never get complaint letters from fans and gamers saying, ‘I win too much.’ This is fundamental to entertainment; the player is looking for a satisfactory conclusion.”

“There is a basic dichotomy in games: When you reward players for winning a war and give them 100 gold pieces, the player never really questions rewards. If something bad happens, if there is a setback to the player, the react much differently. They complain the game is broken, the AI is cheating, or something in the game is wrong. You have to be careful with setbacks. It’s important to explain why these things happen, and how to avoid these things in the future. If gamers believe the game is cheating, of you haven’t explained something well, the will leave. I see a big value is replayability. Whenever there is an opportunity to plant the seed of replayability, you’re on your way to a satisfied customer.”

“One of the key rules of game design is the first 15 minutes. These introductory minutes have to be fun, satisfying, and exciting. You are letting players know they’re on the right track, you should reward them, and let them know cool stuff will happen later. This doesn’t negate increasing difficulty levels later on, by the way.”

“I once gave a talk on how games should be split into four different difficulty levels. I was wrong. Now, Civilization V has nine difficulty levels. As players move on they continually get better and receive rewards. You want to feel they are above average.”

“Having worked on older games that had crude graphics, designers, old timers like me, actually have an advantage over younger designers because we have worked hard to make people believe things despite the graphics. Part of the unholy alliance is that you need to create a suspension of disbelief. It’s your part of the bargain, and it’s the gamers’ part, too.”

“There needs to be a certain moral clarity in your games. With Civilization, our testers told us we had opposing leaders who were very cranky and aggressive. Their opinion was that the enemies, who were about to die, didn’t seem like they should be surly and aggressive. It didn’t seem right. But you know, it’s Genghis Kahn for goodness sake. Do you want them to say, ‘Oh please don’ hurt me, there are women and children here.’ That doesn’t seem right to me.” 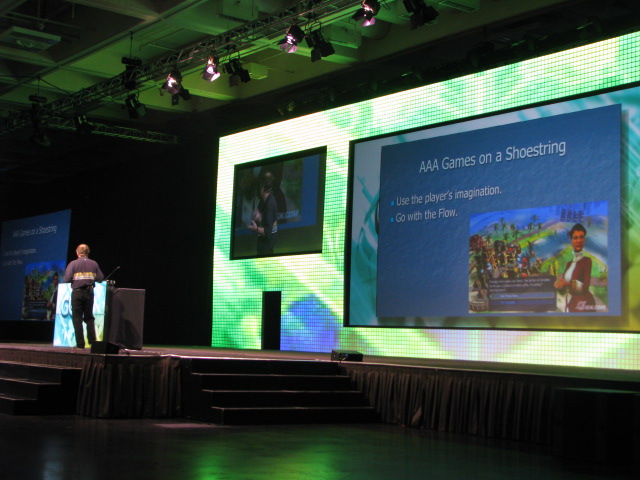 “Player psychology has nothing to do with rational thought. My background is in mathematics. In CIV REV (Civilization Revolution, the console-only Civilization game), we found interesting reactions to what seemed to me vary rational situations. For instance when we pit civilized militia against uncivilized barbarians, and their points were 1.5 to 0.5, respectively, we heard players complain. Even when players were in a battle with 1: 3 odds, they felt they could win. I watched these testers and players, and they would say, “I had the lower number, and I felt I could win in a 1:3 battle. It made sense to the player that they could win. I thought, “Something is going on there. But it’s not mathematics.” Right around 3:1 to 4:1 area, the player felt like he or she should have the chance to win.”

“In early Civilization games, I made Civ real-time, which meant everything happened in real-time: My first mistake was to make it real time. I modeled some elements of the game from Sim City, which was real-time. It was inspiring. But what we found was that in real-time gaming the player becomes the observer. Our mantra is that, “it’s good to be king.” When we made Civ a turn-based game, the player became the star, they made things happen.”

“In the Civ games you can research tech. I thought it would be an interesting path, and I made it so that there was a certain amount of randomness in it. You would never know where it would go.  We made the process mysterious. Once players realized they wanted to get the gun powder during the tech path, they didn’t want it to appear randomly; they wanted it quickly. They were like, ‘I know there is gunpowder out there; you can’t fool me.’ Players want to be in control. So, we learned that randomness has to be treated with a lot of care. When random things happen, paranoia strikes the heart of the gamer. The computer is all of a sudden ‘after them.’ If they feel insignificant, or there is too much random play, then the players will somehow come up with the most paranoid and worst possible explanation or the game’s reasoning.”

“We came up with the Civ network: In it, one idea was to give gold to other players. Cool, right? You could give gold to another player. You could bargain for it, use it to trade, help other characters out. You could use it as a bargaining chip. Fascinating dynamics would arise, we thought. What we found is that nobody ever gave gold to other people. Not sure what this says about the human condition; it’s really sad, really. But that was a bad idea that I had.”