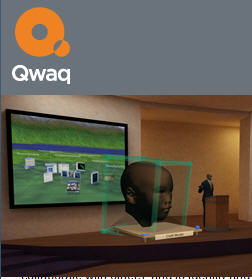 Virtual collaboration might sound fanciful, but increasingly experts are saying this is where the office environment is headed. Well-known venture capitalist John Doerr is just the latest to speak of a 3D “radically immersive” Web and to say that he is looking to invest in it, though he is not the backer of Qwaq. In the latest online 3D environments, users can turn to each other and carry one-one-one conversations, or one-to-many conversations, just as in real life. Qwaq tries to extend that vision, but is still in early stages.

We’ve played with Qwaq, and here’s how it works:

You enter a virtual room, occupied by other users and objects like tables and posters on the walls (see screenshots).

Many of those objects are your standard desktop items. A big square poster on the wall, for instance, might be a Word document or Excel spreadsheet. When you click on the spreadsheet with your cursor from across the room, or access it via toolbar command, it’ll expand to fill your screen. 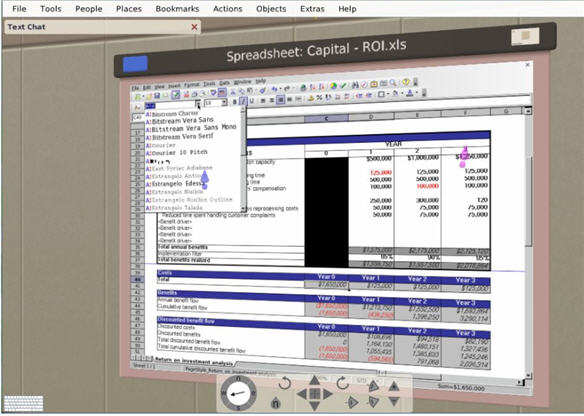 You see what the other users are doing in real-time, as they move around and modify objects, such as the aforementioned Excel spreadsheet. If you are editing that spreadsheet, you can also see another user’s person as they modify each cell.

There are some less obvious examples of objects. One the company showed me was a 3D diagram of a molecule that a biology team could study. Another was a virtual representation of a patient’s head, which could be used for illustration at a meeting of physicians in their virtual conference room. You can also place “real world” objects into your room, like fans or house plants, for ambiance.

You can chat with the other users, add or subtract objects, or move through different rooms as desired. There’s not much lag, and your computer doesn’t have to be all that powerful. 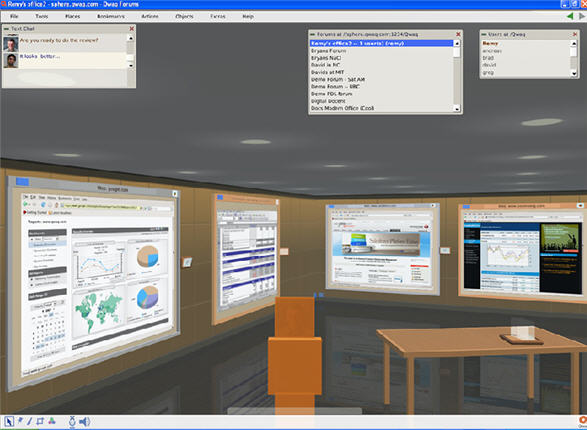 Qwaq is just one of several companies pursuing this vision, although it is the first solely focused on large company (enterprise) collaboration to get venture backing. Tixeo, of France, is another start-up focused on the same market. A range of other companies are offering tools or other initiatives to set up virtual worlds, though they vary in their focus on letting corporate groups collaborate. They include Second Life, VastPark, ProtonMedia, Forterra Systems and Multiverse Network.

Here’s why Qwaq’s efforts are significant.

Online collaboration tools are increasingly in use, but typically are limited in their use (Google Docs, for example, allows real-time collaboration, but with no way for group communications). Qwaq is more flexible. It provides a way to share any program file or resource across computers. Placing everything in a virtual environment allows for a larger number of objects than a straightforward desktop interface. Say you’re working with a project team on a collection of a dozen different files and documents. By virtually looking around the room, you can see who is working on what, and what’s available to be worked on, more easily than you can with most other collaboration programs.

Chief executive Greg Nuyens talks a lot about “intuitions” in a 3D environment: Our sensory apparatus are much better for operating in a 3D world. It lets us use our brain, our visual cortex, as well as sound as a cue to activity. All of this is under-used on the desktop. (With Qwaq, you can choose whether or not you hear people talking in the program, and there are sounds for various actions.)

This is just the beginning of virtualization. Business computers tend to be less powerful than home computers (which are often equipped for gaming). Second Life has thrived, in part, because it is best used at home with computers having better graphic cards and memory. Qwaq has thus been designed with a simpler interface. Over time, Qwaq aims to handle and represent more tasks.

The company won’t say how many users it has, but the number is small. The company charges between $30 and $60 per user per month.

The financing round is the company’s second. It was led by Alloy Ventures and Storm Ventures. Previously, Qwaq raised less than $1 million in from KPG Ventures.