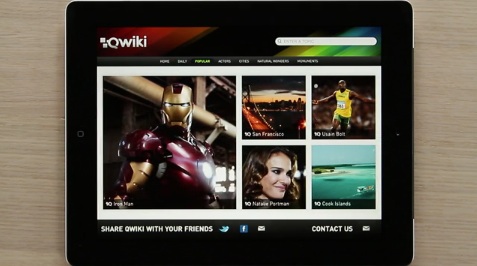 Qwiki, the company that offers a new, interactive way to explore a wide range of topics, announced today that its iPad application has been downloaded almost 500,000 times.

After the San Francisco company first opened its website to the public in January, I’ve seen plenty of praise for the image- and video-heavy presentations that it creates around subjects on everything from “Frank Lloyd Wright” to “Yemen” (to pick to topics currently featured on Qwiki’s front page) — it’s like using a futuristic computer out of Wall-E. Others have wondered: Once the novelty wears off, what is it good for?

For a while, I was more in the skeptics’ camp. I liked the technology, but I rarely felt motivated to return to the site. Founder and chief executive Doug Imbruce told me that Qwiki’s true home was on mobile devices, especially on the iPad, and when I tried it out, I was pretty much convinced. Browsing presentations feels natural through the iPad’s touch interface, and the iPad app also offers a local filter for exploring topics. It looks like I wasn’t the only one won over by the iPad app — 500,000 downloads is pretty impressive for less than two months (the app launched in late April), and Qwiki also says that traffic to the iPad app quickly surpassed web traffic.