Cloud and web-hosting provider Rackspace could be in for some major changes as the company sputters along in the shadow of cloud giant Amazon Web Services and other contenders.

Rackspace’s board has tapped Morgan Stanley to consider a number of queries that have come to the company in the past few months — “ranging from partnership to acquisition,” according to a filing the company submitted today to the U.S. Securities and Exchange Commission.

“No decision has been made, and there can be no assurance that the board’s review process will result in any partnership or transaction being entered into or consummated,” Rackspace said in the filing. “The company has not set a timetable for completion of this process and does not intend to discuss or disclose further developments with respect to this process unless and until the board approves a specific partnership or transaction.”

The deal could put Rackspace’s public-market investors out of their misery. The stock has generally been on a decline since January 2013, and in after-hours trading today, the stock was up more than 8 percent. The stock closed for the day at $30.68.

We heard independently a couple of months ago that Rackspace might end up being bought.

That tidbit wasn’t surprising. As Amazon announces one price cut after another for its manifold public cloud services — and competitors like Microsoft and Google do, too — Rackspace executives have said it’s quite happy to sit out the price wars, thank you very much.

And managed hosting, other companies have been coming up quickly. Linode and DigitalOcean in particular have attracted developer interest in the past few years.

Altogether, Rackspace’s net revenue growth has slid from more than 32 percent in 2011 to 15.6 percent at the end of last year. 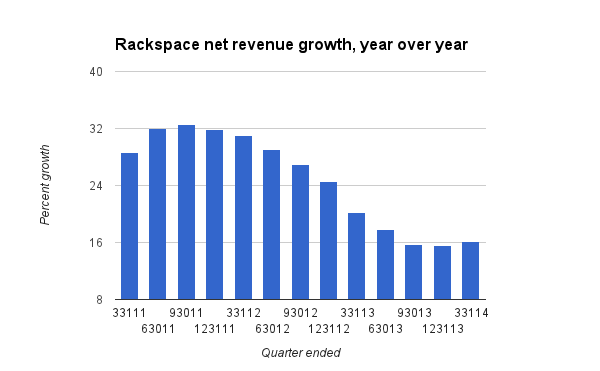 That leaves Rackspace to try out vertical-specific strategies like a focus on digital marketing and a startup incubation program that could help it attract young developers to use the company’s infrastructure.

But such initiatives might be too little, too late. Amazon Web Services has jump-started infrastructure-as-a-service — renting out slices of physical servers for developers to build apps on and only pay for what they use — and Rackspace hasn’t kept up, even with its pioneering role in the OpenStack open-source cloud software project.