“Over the top” and “crazy” seem like such mediocre words when you’re trying to describe the world of Rage 2. The latest game from id Software and developer Avalanche Studios is one of the zaniest video games you’ll find in the genre of post-apocalypse shooters.

Tim Willits, studio director at id Software, gave the developers the freedom to create a game that was “more crazy than Rage,” the original car combat and shooter title from 2011. It’s worth noting that the original Rage itself had to be crazier than id’s previous stable of shooters: like Wolfenstein, Doom, and Quake. I played Rage 2‘s latest demo at a preview event in San Francisco, and then I talked with Willits.

Yet the first Rage was a fairly serious affair, where the world was hit by an asteroid. Some of the human race survived by hiding underground in bunkers, and the action took place a century after an apocalypse. But most of the surface world became a wasteland, controlled by bandits and an oppressive militaristic organization called the Authority. Only in the mutant carnival of JK Stiles, where you have to survive a shooting fest against mutants in a game show, did some craziness appear. The aim was more survival and the defeat of the Authority, rather than humor.

With Rage 2, all that restraint is gone, as Avalanche is well known itself for the over-the-top shooters Mad Max and Just Cause. One of the things they came up with an outlandish color scheme, with plenty of pink, bright yellow, and purple neon lighting. When you blast someone with a shotgun, it’s sometimes hard to see the blood splatter among all of those colors.

Rage 2 puts you in the shoes of Walker, a hero with a voice who wanders the open world. The wasteland is alive with mutants, remnants of the Authority, and absolutely bonkers thugs who rule their own little towns and outposts. In our preview, I had to defend a town and its mayor, a fairly normal woman named Loosum Hagar, against an attack from a punk rocker faction called the Goon Squad. The mayor sent me to go after the rich businessman Klegg Clayton.

But to get close to Clayton, I had to become a celebrity of the wasteland. So I had to race a buggy in the Chaz Car Derby, where we raced around a desert canyon track, trying to avoid pools of toxic green slime. And I had to survive the Mutant Bash TV, which was akin to the Stiles experience from the first game. Except this time, the hostess and her attendants were like something out of a creepy horror film. One of the bikini-clad servants had a huge baby mask on her head. She sliced her hand with a knife and it bled into a cup. The hostess then drank from the cup and spoke in a most annoying voice.

Then I went into the bombastic arena, with a game show announcer and lots of lights. Mutants came at me and I had to use my different weapons and abilities to strike them down as they came from all directions. The Slam command became most useful, as I jumped and then hit the ground with my fist with the force of an explosion, knocking the enemies down as they closed in on me. Each round got tougher than the last, until I had to face off against a big mutant with a gatling gun. It wasn’t so hard as I hid behind a stone column while shooting back.

Once I was done with that, I headed back to the town where Klegg Clayton was. The guard let me inside because I was a desert celebrity now. Inside, it was a nightclub with disco lights and a big TV. Klegg was colorful and bombastic, like a fight night announcer in his normal voice. He lures Walker into his ornate office with a beautiful view of the … wasteland. Walker plants a listening device on Klegg’s computer and leaves in the elevator. But Klegg is on to him and has other plans. Big battles with goons and bosses ensue, and you get to use all your crazy abilities and weapons. 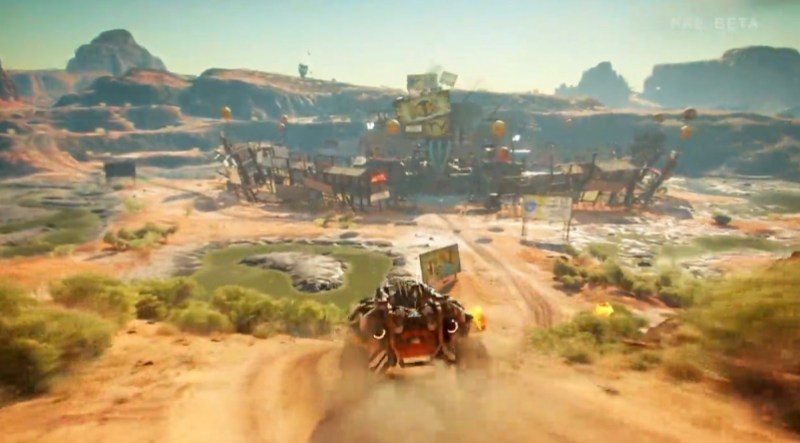 Above: You can kill mutants in a game show in Rage 2.

Like I found with Mad Max, you can find a lot of things to do in the wastelands. And not all of it is desert. You can explore are mountains, forests, and other environments as the world recovers from the asteroid collision. In the original Rage, you had to deal with loading screens whenever you moved outside of a fairly small area. That limited the kind of battles you could fight. But this world promises to be full of dangers, weird people, and places to go as far as the eye can see.

In Rage 2, you can become far more powerful than you were in the earlier game. Your powers are almost like that of a Jedi Knight, with the ability to force push opponents who are close to you with the Shatter ability. They can go flying back and fall off a cliff. But once you do this, your ability is set on a timer and you can’t use it again for a little while. I found myself repeatedly using the Slam against the mutants in my arena battle, as it took the worry out of aiming at one mutant while another hit me from behind.

Once you’ve leveled up, as we were in this demo, you can rotate between the abilities and take out one enemy after another, as you can see in the videos. The Barrier gives you shield from one direction. The Vortex sends a group of enemies in one location up into the air, so you can then shoot them while they’re helpless. You can also jump on a Vortex, sending you up into the air, and then hit the ground with a huge Slam to devastate enemies.

Some of those enemies you can take out with a wingstick, my favorite weapon from the first game. But others are tough bosses that will require rockets and combos of all your abilities. Check out the videos for a good idea of what you’ll be up against. 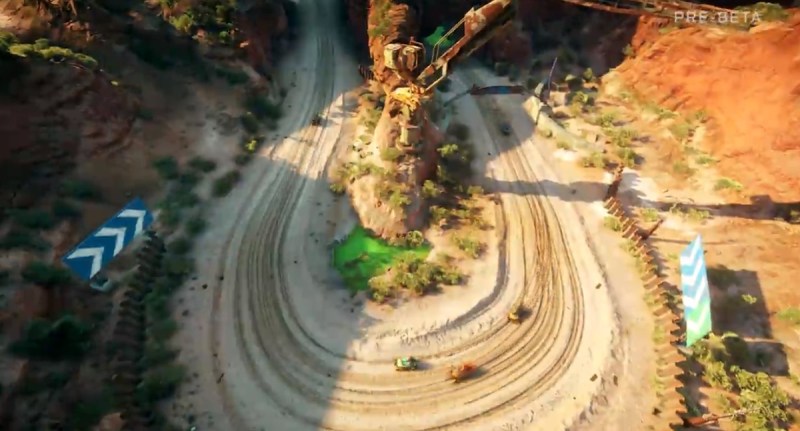 Above: Rage 2 features car combat after the apocalypse.

The dune buggy that I drove was hard to handle when I turned, but I enjoyed the racing segment. It had nice visual with the dust rising from the tires of the vehicles, and I had plenty of hazards to worry about, either from other drivers or from pools of acid and other pollutants on the side of the road. I think that driving cars, flying drones, or otherwise moving vehicles through the wasteland, on or off the track, will be much more satisfying in Rage 2. 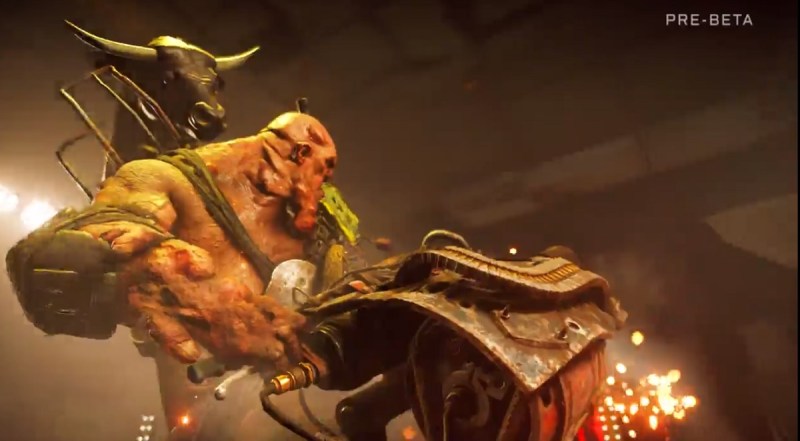 The familiar id guns are all there, like shotguns, rocket launchers, and assault rifles. But you can also use special weapons, like ammo that sets enemies on fire. One weapon will shoot bullets into an enemy and then whisk them into the air in any direction that you point. While they’re airborne, you can shoot them a second time and send them sky high. Such tricks are a great way to show off your prowess with the arsenal. 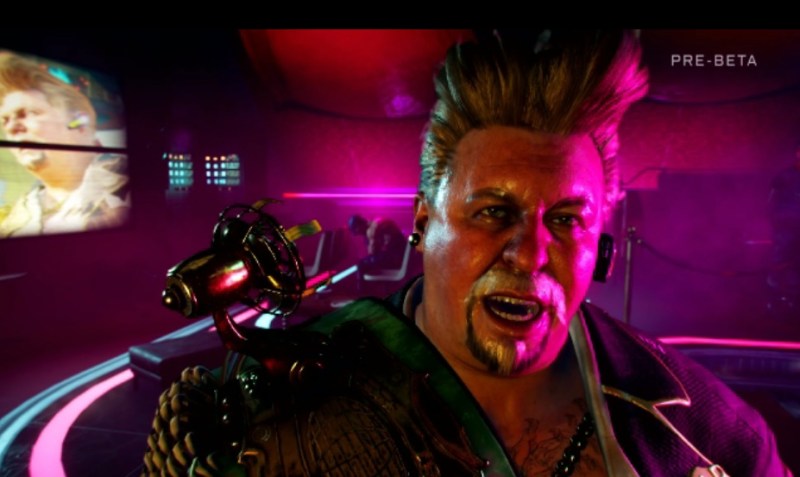 Above: Klegg Clayton has a fan on his shoulder.

The people you meet in the wastelands, towns, and outposts are all survivors. Some are zany like Klegg Clayton and the hostess of the Mutant Bash TV show. Others are normal. But you’ll want to stop and talk to a lot of them. I hope the open world has no limit to these kinds of characters because they’re the ones that tell you stories or set you on missions.

It’s too over the top 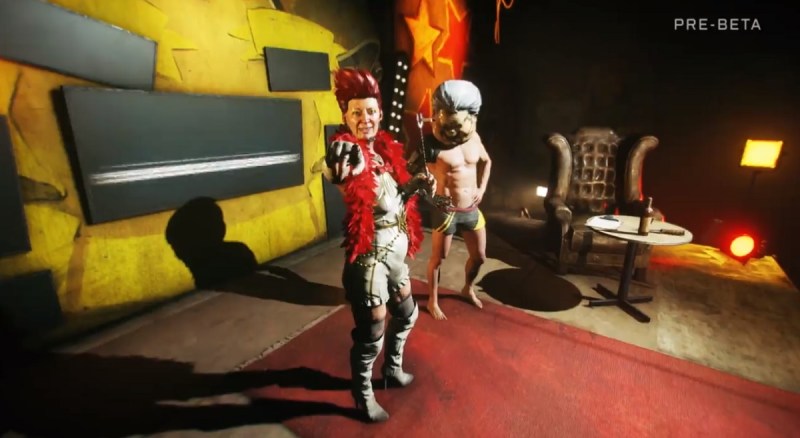 Above: Who creates characters like this from the apocalypse?

If such a thing is possible, Rage 2 is too over the top. It has characters like Klegg Clayton, who has a big wrestling belt with a mini electric fan on it so it can blow cool air in his sweat-covered face all the time. When you first meet Klegg, he is surrounded by women (I think) in bikinis wearing big baby-face masks on their heads. One of them lights some fireworks that shoot over to another woman or thing in a cage. It lights the person on fire, and she screams in agony while everybody else laughs or ignores what’s happening.

I think we’re supposed to be disgusted by these characters. Or maybe we should be shocked at their weirdness. It’s all part of an “anything goes” post-apocalyptic environment that is supposed to tell you how low society has sunk. That is true, I guess, only if id has a method to its madness. This demo was a very small slice of the game, but I hope the entire game isn’t like this, as it’s hard to go from one crazy scene to the next.

Some abilities seem too familiar 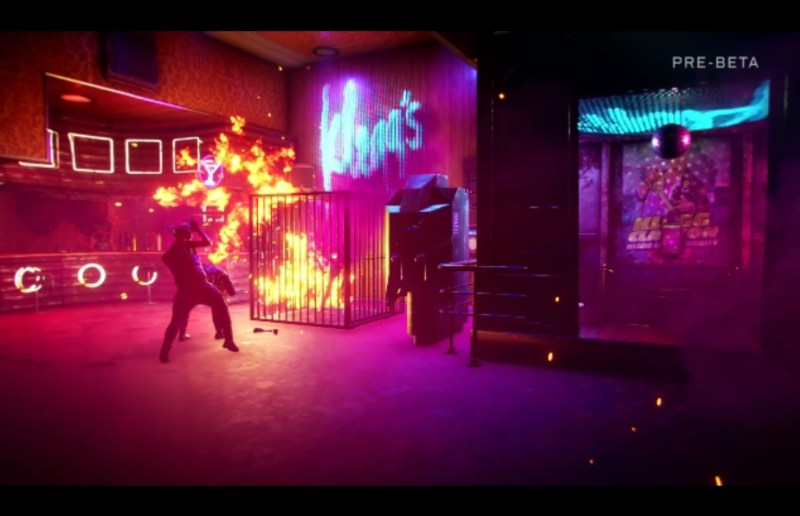 Above: Somebody is burning and screaming in Rage 2.

One of the most effective abilities is the aforementioned Slam. But it’s also one of the most memorable abilities in Call of Duty: Black Ops 4. The Barrier shield is like the protective barrier in Overwatch. These are all very interesting technologies, but you don’t really expect to find them in a wasteland world that has forgotten technology. I realize that they’re fun and they enable you to take down many more enemies at once. Fortunately, we don’t have a grappling hook, as that would be too much like Just Cause.

I didn’t capture any video of my gameplay. So the videos you see here are provided by id. I suspect the reason was that the preview demo had numerous bugs. The colors weren’t synched or the characters would disappear. All the usual bugs you see in pre-release code. Hopefully, id will clean it all up. 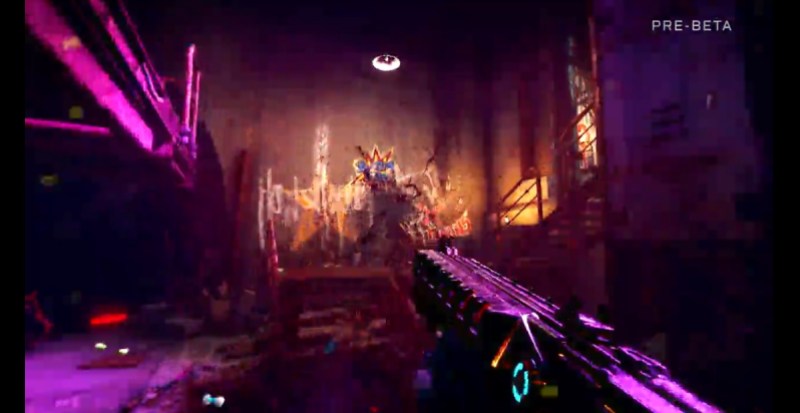 Above: A blood splatter is somewhere in here in Rage 2.

The only way that players would tolerate this kind of madness in a video game is some sense of purpose. I’m not sure Rage 2 has that, as the level of chaos is far greater than it was in the first game. Will you simply wander the open world of the wasteland, or move through it with a purpose?

Willits says Rage 2 has a story you can pursue, but you don’t have any urgency to do it in a linear way. You can make your way from outpost to outpost, from the forests to the canyons, in Rage 2. I hope you don’t just get lost in silliness. The Authority is still out there. Walker is a serious character who can talk, which gives him much more potential for interesting dialogue and story scenes than the silent protagonist in the first game.

And I hope they can inject just a little bit of seriousness and sense of mission into the world where everybody is insane. Yes, it sure sounds like the Mad Max story. But I hope id doesn’t forget that story is what keeps us in the open world.