San Francisco startup Heroku has found a fresh approach to helping developers build and deploy applications from the popular Ruby on Rails programming framework. It’s the only company to combine automated deployment — in other words, you just upload the code onto your browser and it will go live on the web — with an exclusive focus on Rails, says co-founder James Lindenbaum. Even more exciting is a recently released feature that moves Rails development into the Internet cloud.

More and more services are leaping into the cloud, which promises to allow developers to create applications that are, in Lindenbaum’s words, accessible “on any device, any platform, anywhere”. Heroku already took a step in this direction when it launched in private testing last October. Initially, it just offered in-browser tools (see screenshot below) to simplify the development process, attracting developers who were interested in Rails but don’t have the technical chops to create an application from scratch, or who were just fed up with with the existing tools. 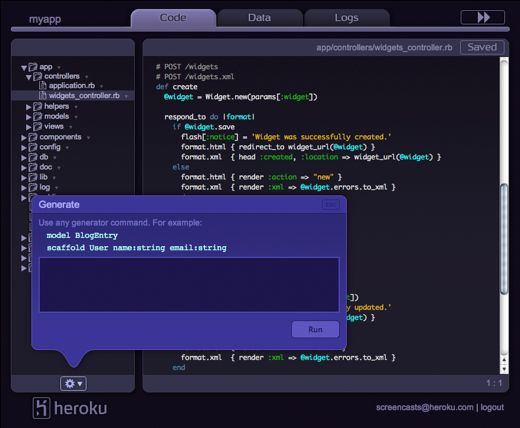 But if you’re an experienced developer, you’re probably not looking for a new interface. Lindenbaum says that until recently, most of those developers saw Heroku as little more than a toy. But now the company has released a feature that should tempt Rails veterans too — APIs that allow them to use whatever tools they want to edit their code once it’s been deployed on Heroku. For the first time, you can use any interface to edit a Rails application directly on the web, rather than rewriting the code offline, then uploading it to your host.

There’s plenty of competition to help Rails developers get their applications online, such as Rails hosting service Engine Yard, which announced a $3.5 million round of funding in January (our coverage). But Lindenbaum and Engine Yard chief executive Lance Walley both say there’s room for companies to fill many different niches.

Engine Yard nd Joyent offer service-oriented Rails deployment — namely, a support staff that will work with you to make sure everything goes smoothly — while Heroku is more technology oriented. Heroku’s three-person staff doesn’t have the manpower to hold the hand of every developer, but its focus on “one-click” deployment means that you can get your application online and running almost instantly. Service-oriented solutions have obvious advantages, but they also cost more and entail time-eating back-and-forth communication between developers and support staff.

It looks like there’s a demand for Heroku’s services. Sign-ups increased dramatically when Heroku announced some of its new services in February, with registration jumping from 2,500 to 7,000 users, who have created more than 5,000 applications. The company is now in talks for a possible first round of venture funding.

Heroku was one of the companies unveiled by incubator Y Combinator last year. We offered our thoughts on the most promising of a new batch of Y Combinator companies here.