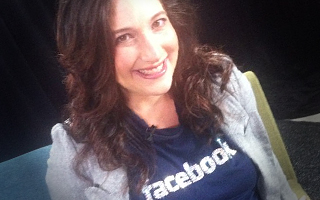 “I have spent the past six years working alongside some of the brightest, most wonderful people, and I have had the chance to work on projects that changed entire industries,” she wrote on — where else? — her personal Facebook profile.

“It is time for me to pursue my dreams and launch my own media company… The fun is just beginning.”

A Facebook spokesperson told VentureBeat, “We can confirm Randi has decided to leave Facebook to start her own company. We are all grateful for her important service.”

In her resignation letter, which was posted in its entirety on All Things D, Zuckerberg states that Facebook taught her “you don’t have to be an engineer to be a hacker!” As a media/cultural hacker, she was responsible for bringing many social causes, media events, political happenings and other items of national import onto Facebook’s digital platform.

“When I think about the projects I’m most proud of in my six years at the company, they all have one thing in common: They revolve around the intersection of traditional media and social technology,” Zuckerberg said in her resignation letter.

For example, in 2008, the Presidential Primary on ABC was the first televised debate to incorporate social media, and the integration began with a Facebook partnership. In 2009, the inauguration was enhanced with live streams from Facebook, as well, which Zuckerberg says “fueled a multi-billion dollar industry around live streaming.”

And when Facebook Live launched, it gave Facebook yet another boost in its standing with mainstream media. Events such as President Obama’s 2011 Town Hall on Facebook Live were accessible, interactive and engaging.

As the U.S. gears up for more political debates and another presidential election, Zuckerberg’s new venture, to be called RtoZ Media, is poised to bring every political candidate and major news network to every important social media platform.

“My goal is to launch my own innovative programming and work with media companies to develop their programming in new and more social ways,” Zuckerberg wrote. “In attacking this challenge, Facebook will clearly be a central element in all of my projects. I plan to demonstrate that anyone can do groundbreaking media work on the platform.”

Zuckerberg’s first child was born several months ago, and she has been on maternity leave from Facebook. While we can imagine that starting your own company while raising a young infant is quite a juggling act in itself, we’re sure the pace will be somewhat easier on the family’s schedule.