Raptr is unveiling the public beta test of its social network for all kinds of video game players. While it’s a crowded market, the company has a good chance of becoming a central hub for gamers who want to know what their friends are playing online, regardless of game type.

The Raptr social network will be able to access gamer data from a variety of sources. That includes PC games, Mac games, Xbox Live member accounts, casual games based on Adobe’s Flash technology, Facebook and certain games for the Nintendo Wii and PlayStation 3. (The latter two just don’t have as much gamer data available.)

“Our goal is to eliminate the need for gamers to monitor isolated islands,” said Dennis Fong, founder and chief executive of Raptr.

The Mountain View, Calif.-based company is also announcing today it has raised $12 million in venture capital from Accel Partners and the Founders Fund. 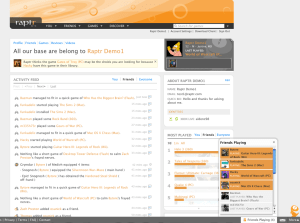 Fong, a serial game company entrepreneur and one-time champion professional gamer known as Thresh, said that the company learned a lot from its 1,000-member private beta since February. The company added a number of new features. The version launching today can extract data about a gamer to build a kind of 360 degree view of the their habits. When you click on the Friends tab on the Raptr site, you can see at a glance the game and the platform your friends are playing and whether they’re logged in or not.

The Raptr service also updates games automatically so that users don’t have to worry about downloading bug fixes. And it allows a player to display all of his or her gaming identities in a single place. All of this, of course, depends on everyone opting in to volunteer the private data.

It remains to be seen if Raptr’s cross-platform approach will be better for gamers. Its competition includes many single-platform social networks, such as Xbox Live on the Xbox 360 or the PlayStation Network on the PlayStation 3. Other rivals include Xfire (a company that Fong founded) on the PC, Gamestrata, GamerDNA, WePlayThis, UGame, and MyGameMug. On top of that, Electronic Arts recently bought the similarly-named gamer social network Rupture, started by Napster founder Shawn Fanning.

Fong believes that the key will be to get Raptr adopted rapidly. While he was at Xfire, Fong and his team accomplished that task by cutting lots of distribution deals that allowed the Xfire service to be bundled with the hottest games. Viacom’s MTV bought Xfire for $110 million.

The company also has an alpha version of its Mac client software. So far, Raptr supports thousands of games, including 2,000 Flash games. Among the most interesting features: Raptr lets you see how popular a game is among your network of friends. You can see how often the game is played over a period of time. On top of that, you can see when your friends are most likely to be playing.

The company has also rounded out its management team, hiring Ranah Edelin as vice president of marketing and business development. He previously worked at Electronic Arts, where he managed all of the online businesses for The Sims label, one of EA’s four big divisions. Raptr also hired Dave Swenson as vice president of engineering. He spent seven years as a senior director leading various product development groups at eBay. 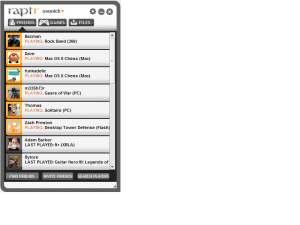