The Raspberry Pi Foundation has launched an all-new piece of hardware today — the official Raspberry Pi touchscreen display is now on sale for $60 (£48 GBP) online, and through a handful of brick-and-mortar retailers.

Today’s launch comes almost a year after the organization first teased the device, though initial estimations suggested it would arrive late last year or by early 2015 at the latest.

The 7″ unit sports an 800 x 480 display, is designed to work in conjunction with the $35 RaspBerry Pi mini computer, and will essentially let users build their own tablets and other devices that rely on screens. 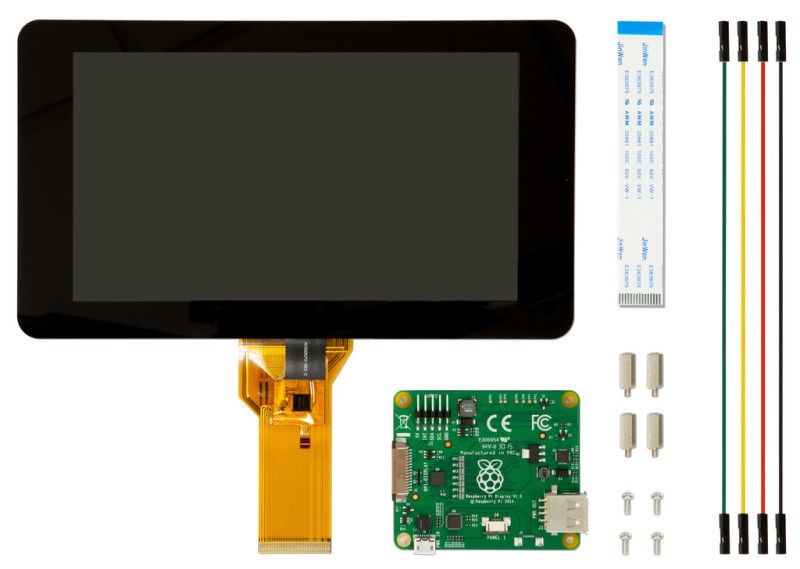 Users connect their Pi to the display through two conduits —  it’s powered from the Pi’s GPIO port, while a ribbon cable connects to the DSI port. The Foundation says touchscreen drivers will be rolled out with an update to the Raspbian operating system, enabling 10-finger touch and an on-screen keyboard.

For the uninitiated, the Raspberry Pi was created as an easy entry point for budding programmers, though it was also pitched as an affordable means of “hacking” new technologies in emerging markets.

The device has come a long way since its launch back in 2012. While it initially only supported a handful of operating systems, including Linux, a processor upgrade in the Raspberry Pi 2, which launched back in February, allowed it to support Windows, too. This significantly broadened the horizons of the credit card-sized contraption, transforming it into a machine capable of many of the same things as a normal PC.

Available in six different colors, the Raspberry Pi display opens a new world of possibilities for budding developers. While they’ve always been able to hook up a Raspberry Pi to an external monitor, the launch of a pre-made screen (a little assembly is required), built specifically for the mini computer, makes things a whole lot easier.