Glassdoor, the startup where employees can rate their bosses and share salary data, says it has been growing healthily since its launch in June — from a collection of 3,000 reports and reviews representing 250 companies, it has expanded to include 60,000 reports from workers at 11,000 companies. That growth is international, too, with users in more than 80 countries. And now Glassdoor is making itself more even more useful to those outside the U.S., by providing salary data in more than 100 foreign currencies.

Okay, this isn’t exactly a huge innovation, but it’s a smart move for a company eyeing international growth. The announcement also gave me the opportunity to take another look at Glassdoor, which I haven’t really explored since its launch. For one thing, those growth numbers are encouraging — It’s too early to say whether the company is building a sustainable business, but early numbers indicate the idea has legs. Keep in mind, too, that those reviews aren’t just casual users — they had to share their salary information or a detailed employer review to access all the data on the site.

I was also impressed by how fun and interesting all the reviews are. Unfortunately, there are only a few “preview” companies for which Glassdoor publishes full reviews, but I wasted a good portion of the afternoon reading the different reviews of Google, where I saw frequent complaints of arrogance, and also found one reviewer who said the company is a great spot for singles. (Really?) I’m guessing reviews for some of the less well-known companies may be sparser and less entertaining, but at least the Google section proves to be as snarky, addictive and, on occasion, informative as I’d hoped. (And yes, it turns out most Google employees love the free food.) 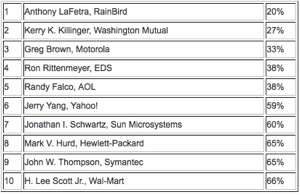 The Sausalito, Calif. startup also recently made all of its CEO ratings public, and even compiled a list of the lowest-rated CEOs with more than 50 reviews (pictured, left). Again, it’s best to take these ratings with a grain of salt, but they’re pretty darn fascinating. And you might be surprised by the sort-of winner — Anthony LaFetra of sprinkler company Rain Bird.

Glassdoor is backed by Benchmark Capital.