I bet you’re preparing for a holiday full of gift-giving and receiving. But you know what tradition follows afterward, right? The day we return the stuff we, gratefully I assume, received … but kind of don’t want.

This year, I imagine Microsoft’s Xbox One Elite controller is on a lot of people’s wish lists. And given that these things sell out before even Microsoft employees find out they are in stock, a lot of you are going get alternatives. One of those is going to be the Razer Wildcat, which is running roughly around the same price as the Xbox One Elite controller at $150 and works Xbox One and Windows 10 PCs (it’s plug-‘n’-play for Windows 10, and needs drivers for 8/7). 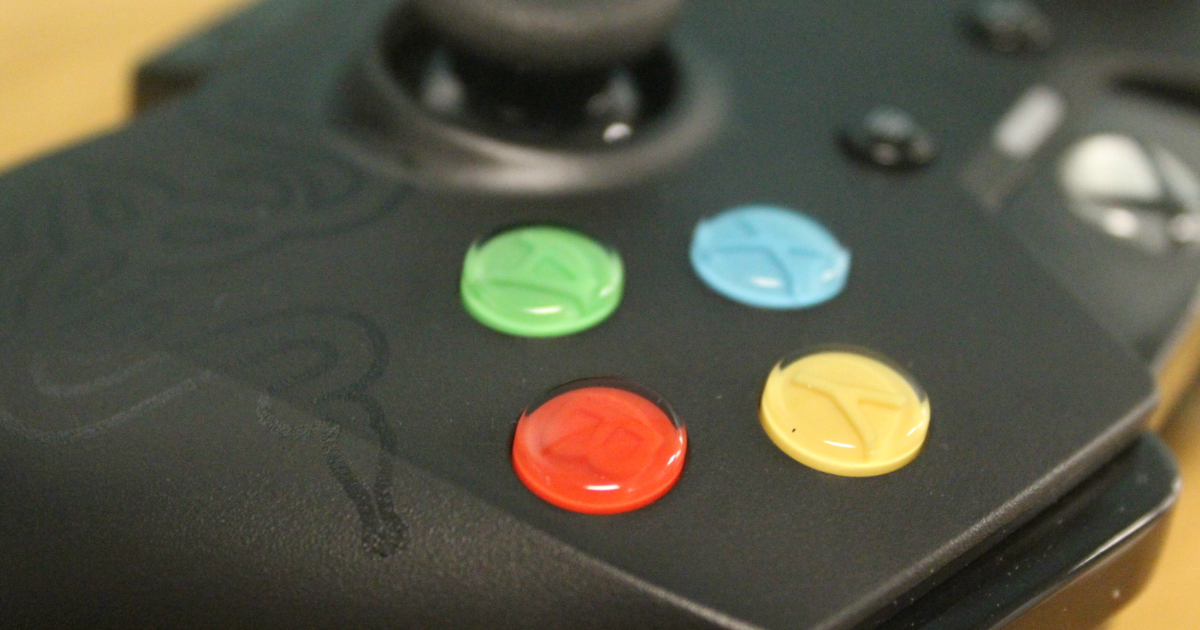 Above: The quickest face buttons in the West

The first thing that I immediately noticed when I grabbed the Razer Wildcat was the face button’s insane sensitivity. I’m not sure exactly what switches Razer has in the Wildcat, but just coughing on the controller could potentially activate the A, B, X, and Y buttons.

What’s weird is that I thought these buttons needed upgrading from those on the Xbox One controller. Yet, the more I use the Wildcat, the more I want all of my other controllers to feature face buttons with the same extremely quick switches. For some players, the sensitivity of these hair-trigger face buttons may be too much and could lead to accidental presses. But after a couple of play sessions, I really wound up liking the idea. If the sensitivity makes you nervous about accidental inputs, I’d suggest those players at least give it a couple of hours worth of playing to see if it doesn’t grow on you.

Like the Xbox One Elite controller, the Razer Wildcat’s left and right triggers have an adjustable switch. This feature allows me to swap the nature of the triggers’ input between a longer or shorter range. A longer setting, which makes the triggers act like a normal controller trigger, allows for more subtlety. This longer range of input is good for things like the pedals in a driving game, where I want more travel to allow for subtle differences in how much I apply the gas or brake. The shorter setting makes the triggers act more like a left or right bumper. I’d want this in games where I could use the few millisecond speed gain in not having the trigger travel as far to input the switch, such as a shooter.

I noticed that even when I set the triggers on the Razer Wildcat to the longer setting, their distance of travel still seemed a hair shorter than the regular and Elite Xbox One controllers. 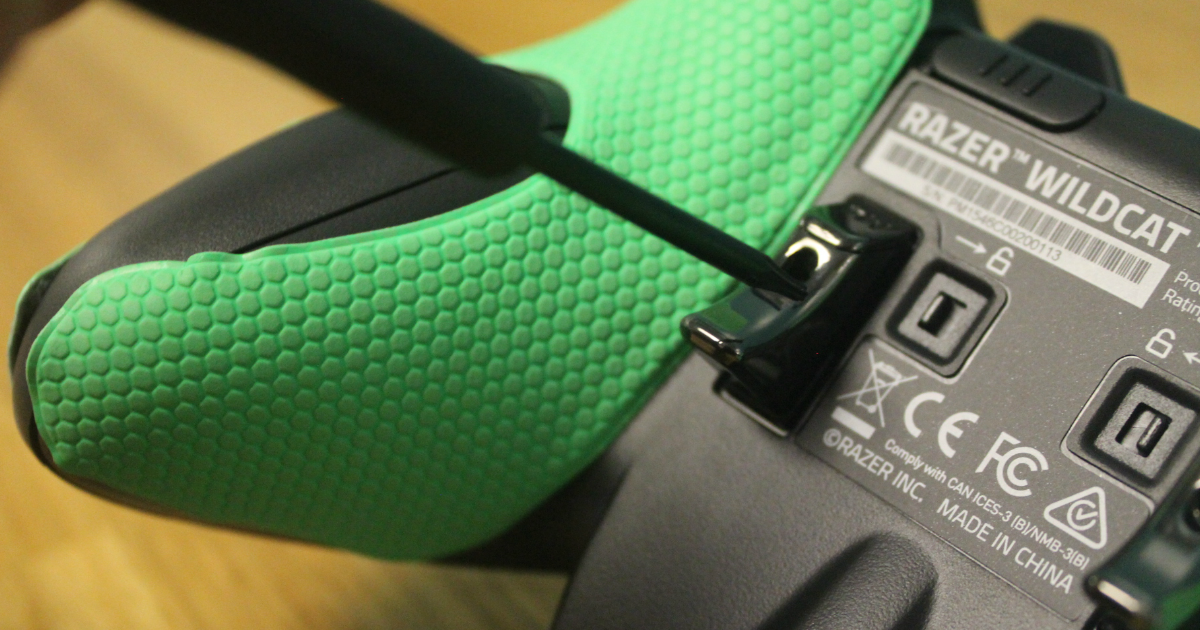 Above: If I don’t like the M3 and M4 buttons, I can just remove them.

Another interesting addition to the Razer Wildcat’s layout are two additional sets of buttons. One set, labeled M1 and M2, are on top of the controller between the trigger and bumper buttons. The other pair, labeled M3 and M4, are on the back, similar to the Xbox One Elite’s back panel switches.

All four have extremely short and quick actuation that is similar to the face buttons. M1 and M2 are easily accessible from the tips of my pointing fingers when they are resting on the left and right triggers. M3 and M4 jut out the back and are molded with sloping hooked body, which make it easy for my middle fingers to locate and pull. M3 and M4 can also be completely removed using a small security screwdriver, which Razer provides.

I really like the mold, placement, and design of these buttons. They’re just in the right spot, easy to hit and use, but I don’t feel like I am going to accidentally activate them in the heat of the moment, which is one of the few things that worry me about the Xbox One Elite controller’s design. Above: Even more buttons!?!

The two sticks are located in the same area as the Xbox One controllers and react perfectly fine. The D-pad could use some refinement, especially coming off of the Xbox One Elite controllers 9-point circle attachment, but that’s nitpicking.

The lower plane of the controller has an interesting additional row of four buttons. Two of these control the mic’s mute and volume status. Volume isn’t so much adjusted via an up and down button as by holding the volume button down and using the D-pad to raise or lower the sound. That seems a bit convoluted to try to pull off in the middle of a game.

A third button controls which profile, out of three, the Wildcat is running: default, profile one, and profile two. Two LED lights flanking the Xbox guide button show which profile is active (no lights indicates it’s in a default configuration). Above: The M1 and M2 buttons

Profiles essentially hold what button binds and settings you have set for the controller — which brings me to the fourth, the binding button. This is how I wind up making use out of the M1, M2, M3, and M4 inputs, by setting them as shortcuts for other buttons on the controller. So if I am playing Call of Duty: Black Ops III and I don’t want to let go of the right thumb stick to press B to reload, I can bind that to M2, located at the tip of my right pointing finger.

Binding a button to one of the M inputs is pretty straight forward: hold down the bind button, hold down an M trigger, and then press the button I want bound to that M input. The controller rumbles to confirm that the entire operation was a success.

The option is cool, but it’s limited to just the M buttons. I guess if I really wanted to re-bind everything on the controller, I could do that through the in-game menu. I could also see some people accidentally irreversibly screwing up their inputs if they could rebind every button on the Wildcat. 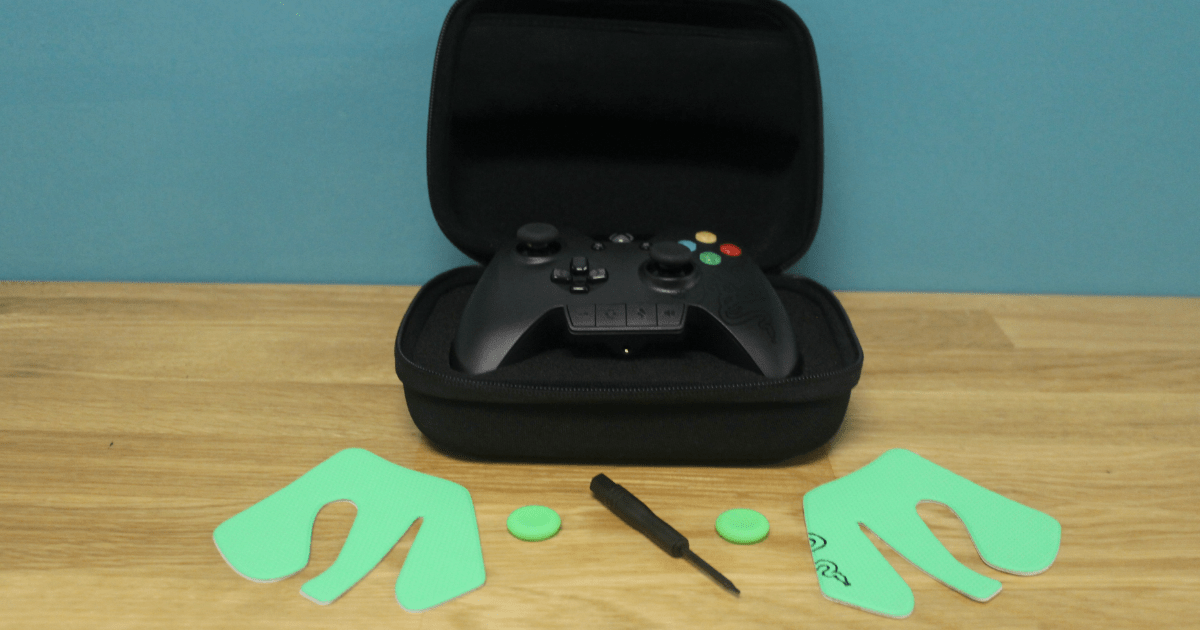 Above: The total package

Razer provides a carrying case for the Wildcat, which is similar in construction to the one the Xbox One Elite controller rocks. It also tosses in two green condom-like rubber pads for the dual sticks, which give the nubs a bit more grip on the thumbs. They also provide a pair of bumpy textured decals, which you need to apply to the palm handles of the controller’s boomerang body.

Installing decals isn’t something I’ve ever been good at, and trying to line these up took several tries. Once installed, they provide a fairly good grabby texture to the controller. But I only see manufacturing robots getting these things on perfectly aligned without wrinkling. At best, they are functional grips that won’t be seen by anyone because, guess what? Your hands are covering them.

At worst, it can make the controller look a little junky when it’s sitting on the coffee table and the flaws of my shoddy application job are on display. I think the idea would have been better executed if the grip were applied onto the controller body by the manufacturer, but I can also see how the product designer may have wanted to give the consumer the option to install the decals or not. If you asked Santa Claus for a Xbox One Elite controller, but received the Razer Wildcat in your stocking instead, I still think you made out. Sure, you’re missing the 9-point D-pad option and the customizable dual sticks, but the most important features of the Xbox One Elite controller are here. Primarily the switch adjustment and the four extra M inputs, with the bonus of some of the twitchiest face buttons I’ve ever played with.

If you’re good at applying decals, I think you’ll be safe throwing away the gift receipt and holding on to the Razer Wildcat.

Razer Wildcat is now available. The manufacture provided VentureBeat with a  controller for the purpose of this review.