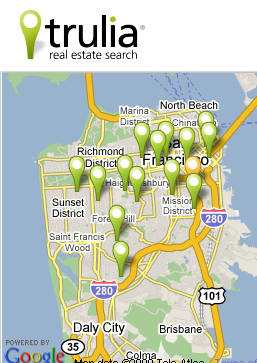 Trulia, based in San Francisco, says it hit record traffic levels in January, and users viewed 40 percent more pages per visit compared to a year ago.

In addition, the company plans to announce a co-branded web site with the Washington Post tomorrow that integrates Trulia’s search technology on the Washington Post’s local real estate content. Trulia will also offer its mapping and pricing information, as well as commenting, Q&As and other interactive features.

It’s yet another sign newspapers haven’t been able to figure out how to manage their once-lucrative classifieds offerings themselves. They’re dependent on startups like Trulia to do the work for them. The co-branded site should launch in April. Trulia ousts Homefinder.com, the Post’s previous real estate search vendor.

Trulia’s growth is matched by several of its competitors. Zillow has grown strongly over the past year, as has ZipRealty.

One reason for Trulia’s recent solid growth, said chief executive Pete Flint, is that investors are looking to scoop up real estate property now that prices have fallen, and Trulia offers rich information about properties and their neighborhoods. Trulia always see a seasonal bump in interest at the beginning of the year, but it’s seen traffic growth in four of the last five months, Flint said. This all comes even while real estate transaction values have been declining since 2005. Moreover, Flint said Trulia will be profitable soon. With 80 employees, and considering other standard expenditures for such a web site, I’d expect Trulia to hit profitability at around $12 million a year.

Trulia is going up against two other fierce competitors: Zillow and Realtor.com. Recent traffic data (see Comscore chart below) suggests it’s a dogfight between the three. Zillow offers property price estimates, which have proven controversial but popular. Realtor has been a long-time player in the industry but is showing stagnant growth (Compete shows a decline).

Noteworthy is that that big portal sites have relatively weak real estate information on their pages, but by featuring it on their home page, they still pull in much traffic rivaling the three pure-play real estate sites.

[Update: Zillow says Comscore’s numbers are low and that internal tracking with Omniture tools shows 7.5 million unique users in January, up 61 percent annually. By the way, that’s an outrageous difference from Comscore’s data. Granted, Comscore’s latest stats are for December only, and the housing market does brighten in January when people start looking again, but there’s still a worrying gap here in statistics that merits a deeper investigation.]

Trulia raised $15 million last year, and Flint says much of that is still in the bank. It has raised a total of $30 million, much less than Zillow, which last raised money 18 months ago, for a total of $87 million. Zillow recently laid off a quarter of its staff.

To diversify from advertising as its primary income source, Trulia started offering subscription services to real estate agencies and mortgage brokers about six months ago. 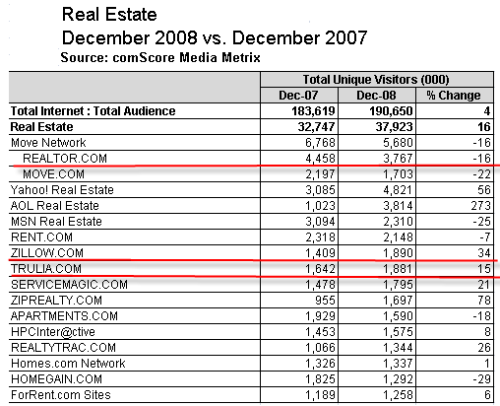