More than a year ago, we were already complaining there’s too much noise in the market. Since then, even more sites have launched, but the latest, RealMatch, brings some extra credibility to the table.

For one thing, RealMatch was co-founded by someone with plenty of real-world job recruiting experience — Alan Schoenberg, who founded Management Recruiters International, now a global recruiting company with 1,200 offices worldwide. For another, even though RealMatch is launching its standalone job search site today, its technology already powers 1,100 newspaper sites through a platform called “thejobnetwork”. In fact, Vice President of Business Development Rafael Cosentino says the Potomac, Md.-based startup is already profitable.

The heart of RealMatch’s approach is a more customized and nuanced structure for job listing than found on the job sites like Monster or on other popular listing sites like Craigslist. Rather than just uploading a text description of either a job (if you’re an employer) or your qualifications (if you’re a job seeker), RealMatch has created a detailed list of jobs and skills that users select from. Since RealMatch has already determined exactly how each field and qualification should be described, the goal is to eliminate the guessing that inevitably comes with any keyword search, and to avoid wading through irrelevant search results. RealMatch can also give users a more detailed sense of whether a job is a good match, a great match or a terrible match, because it can count up how many of the different skills and preferences match up. 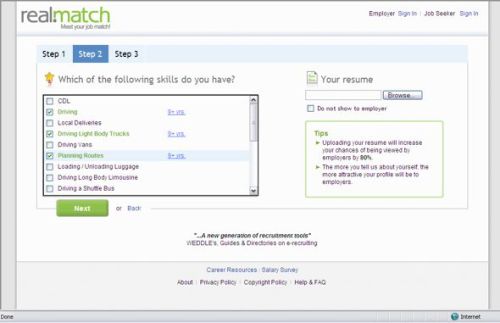 On the other hand, no site can list everything, and RealMatch’s more structured approach could also mean that if you’re hiring or looking for a job that the startup hasn’t thought of, you may not be able to create a listing. But Cosentino says the possible listings will expand as new jobs come up. And the site is pretty rich already. For example, Cosentino showed me how to create a profile for someone looking for a job as a driver, and there was a long, long list of possible skills, including whether or not the job-seeker has experience with hijackings. (I don’t.)

RealMatch also uses a different business model than most other job sites, one that Cosentino says is closer to the traditional recruiting model. Rather than asking employers to pay per listing, RealMatch shoulders the initial risk, and only asks companies to pay when those listings have paid off. Specifically, employers can look at an applicant’s skills and interests and even invite them to apply for free; employers only pay when they decide they’re interested and want to see an applicant’s contact information.

None of this changes how crowded the field is, but the combination of RealMatch’s structured approach with its pay-for-performance business model, not to mention the momentum it has already built, should give the company a good chance of getting heard above the noise.

RealMatch has raised $9.5 million in three rounds of funding.