The cleantech sector continues its strong rebound as the economy gradually comes back to life. The first quarter is notoriously slow for most industries, but the number of cleantech venture deals hit record heights, up 29 percent from fourth quarter and 83 percent from Q1 of last year, according to the quarterly report released by the Cleantech Group. 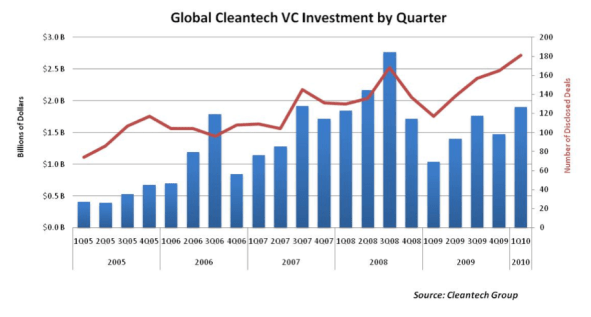 The other major revelation: Advanced transportation solutions broke out as the number one category for cleantech investing, trumping former leader, solar. Cleantech Group President Sheeraz Haji says he found the strength of the green automotive niche surprising, and suggests that it was driven by U.S. HSBC Group’s $350 million investment in Better Place — the leading company working on vehicle charging infrastructure — much like the solar sector was last year by Argonaut Private Equity’s $198 million investment in cylindrical solar module maker Solyndra. Also fueling the rise of transportation: Fisker Automotive bringing in $140 million, and CODA Automotive landing $30 million.

He cited the announcement French water and energy company Veolia made at this year’s San Francisco Cleantech Forum — that it is looking to partner with cleantech startups to make its own practices more green and tech savvy.

“Guys in the water space were shocked to see a 150-year-old company talk aggressively about water efficiency and innovation,” Haji says. “That feels game changing… Applying the same technology seen with the Smart Grid to a smart grid for water feels like a huge opportunity.”

A third important point made by the Cleantech Group’s report is that the IPO fervor generated in Q4 and early Q1 hasn’t really come to fruition. Granted, the market is no longer frozen solid like it was before A123Systems went public in September, but most analysts predicted there to be more movement, considering the profile of the companies that filed — namely Solyndra, Codexis and Tesla Motors. But Haji says this is set to change rapidly as soon as next quarter.

“The pipeline is building up quite significantly,” he says. “It’s choppy out there and deal’s aren’t being brought to market very quickly.”

In a similar report released last year, the Group predicted that the A123Systems IPO would open the floodgate to a bunch of new filings and sales. But Mark Jensen, managing partner at Deloitte & Touche, who co-authored the newest report, says that IPO candidates are still waiting for the right valuations before avidly pursuing the option. On top of that, many are waiting for the big guys in each vertical to file, to see how they fare.

“What we need is several cleantech companies to lead the way, and you’ll start to see other companies come in right behind them,” Jensen says. “By this time next year we could be seeing a susbstantial number of companies going public.”