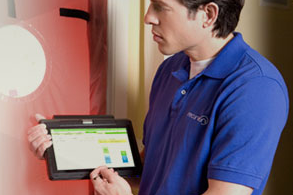 Recurve, a startup that helps homeowners identify and execute tasks that can make their homes more energy-efficient and thereby slash their monthly electricity bills, has brought in $8 million in a second round of capital. Notably, about $4 million came from major hardware store chain Lowe’s.

This isn’t the first time the company has worked with Recurve. They teamed up about a year ago to sell energy efficiency-audits and modifications to Lowe’s customers. This boosted Recurve’s business, which has been around for about six years.

In that time, the startup has evaluated about 2,000 homes, and actually supervised efficiency retrofits — like window caulking, insulation additions, programmable thermostat installations — for about 700. But this isn’t all the company has to offer. Its secret sauce is actually a software program it has built. Used primarily by housing contractors, it pinpoints where the most effective changes could be made, how much customers stand to save, and how much the work will cost them.

This slashes the amount of time contractors spend on a single project, freeing them up to spend time with more customers. It also cuts down on the price tag of contracting jobs for homeowners. It used to be that contractors would have to make multiple visits to a building with revised plans and quotes before actually going to work. Recurve’s software allows all of this back-and-forth to be accomplished on the spot, the company says.

Recurve has uncoupled its software offering from its audit and retrofit services, bringing in revenue by selling just the software to contractors in multiple states. Some of the $8 million just raised will be allocated to filling the orders pouring in for this product. Recurve says it will need to hire more people to make this happen too.

Prior to today’s funding announcement, Recurve displays had been set up in Lowe’s stores around the San Francisco Bay Area, where the startup is based. Now that the two companies are expanding their relationship, these promotions may be rolled out to Lowe’s 1,700 locations nationwide.

Energy efficiency services like Recurve’s appear to be ripe for consolidation. It doesn’t look like Lowe’s will be buying the company any time soon, but this wouldn’t be a surprising move. Just last month, SolarCity, a company that helps homeowners finance and install solar panels on their roofs, snapped up Recurve competitor Building Solutions, which also makes software for home energy efficiency audits. These types of tools could easily be folded into larger companies’ service portfolios.

Lowe’s has been going greener in several ways. In addition to its investment in smaller companies like Recurve, it is partnering with solar panel makers Ankeena Solar and Brightwatts to offer the equipment homeowners need to install affordable, user-friendly solar panels on their roofs.