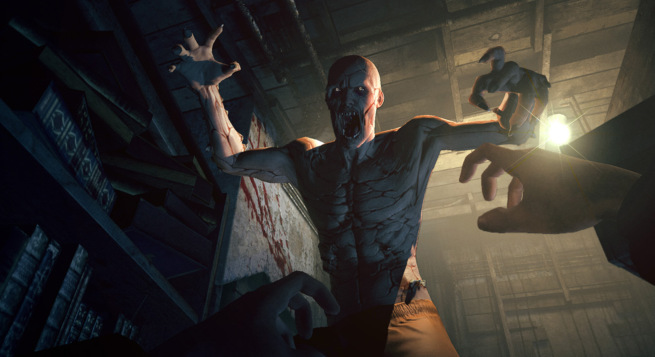 If you loved the 2008 parkour-style action game Mirror’s Edge but thought it’d be better with a bit of heart-pounding terror thrown in, new Montreal-based developer Red Barrels’ Outlast might be the game for you.

“The Outlast experience is mostly about scaring the hell out of people,” Red Barrels cofounder David Chateauneuf recently told GamesBeat during an interview.

The new game is the latest evidence that horror games are enjoying a resurgence on the PC. Titles like Amnesia: The Dark Descent, Slenderman, and The Walking Dead are finding critical and commercial success, despite their lack of traditional combat. For Chateauneuf, Outlast is also less about combat and more about survival. He compares the game to a haunted house.

Outlast is the first game to come out of the new studio made up of former Ubisoft developers. Players take on the role of journalist Miles Upshur, who discovers something horrifying in a supposedly abandoned asylum in Colorado. No one outside the studio knows much about the game’s plot at this time, although its atmospheric trailer makes references to “Operation Paperclip,” a program to recruit Nazi scientists following World War II, and “Project MKUltra,” an illegal CIA research effort involving human behavioral engineering conducted in the 1950s. When asked, Chateauneuf is coy about what role both play in the game.

“We’ve got some people here having fun with those conspiracies and everything. It’s something that we like to play with,” he said.

Chateauneuf and his fellow Red Barrels co-founders, Philippe Morin and Hugo Dallaire, had wanted to create a survival-horror game for a long time. “We kind of had ideas about creating a horror game on the Nintendo Wii. But the opportunity never came,” he said. The problem, he said, was that the amount of money Ubisoft would need to spend on a team to create the game was more than what the game would actually make in sales once it launched.

“For the big studios, I think horror games are kind of dead,” he said. “It’s mostly about action games like Dead Space, all of those games that were originally horror. Nowadays, they almost feel like shooters.”

Outlast’s trailer is notable for its lack of combat. Like other recent indie survival-horror games such as Amnesia and Slenderman, Outlast focuses more on exploration and on running and hiding from enemies than on racking up a kill count, although Chateauneuf doesn’t rule out combat in the game entirely. The trailer shows Miles Upshur from a first-person perspective as he dashes down blood-stained hallways, slides across tables, and climbs up broken walls as a humanoid creature with glowing eyes chases him. The creature looks like it could be a former asylum patient. Chateauneuf laughs when I describe it as “Mirror’s Edge meets 28 Days Later.”

“Mirror’s Edge was definitely a good inspiration,” he said. “We definitely like that feeling that you are actually the main character and not feeling that you’re just a camera floating in the air with a gun at the bottom of the screen. We definitely want [players] to feel more immersed by the experience. So by having to interact with the environment, we’ll put the player more close to the action. For us, it was really important. Really touching the walls, and interacting with different things. That’s something that we want to bring to the game.” 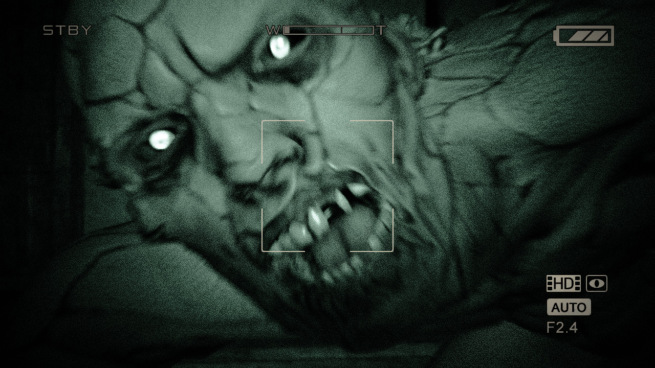 Horror films like Cloverfield, Quarantine, and [REC] were other inspirations for Red Barrels. All three movies are from the “found footage” subgenre of horror, where the audience watches video recordings left by missing or dead characters. Video and audio diaries have long been used as a storytelling vehicle in games, but in Outlast, you’re not discovering them — you’re creating them.

“Everybody’s putting movies on YouTube and on Facebook, so we wanted to get in touch with the player by having those moments where you’re actually recording stuff,” Chateauneuf said.

Chateauneuf said his team is trying to go in its own direction.  “I think we’ll still have action games, and I think zombies are still the important thing in the next few years. But I think that we’re going to have more intelligent games … and we are actually already seeing those type of games out there. I don’t remember the names, but there are some games where they just let you play and you are almost just clicking and exploring a world without really having gameplay. And I think people are starting to like that.”

Outlast is expected to launch on the PC sometime next year.