Rockstar Games launched the beta version of Red Dead Online for some of its players today.

So far, Red Dead Online is only be available to those who bought the Ultimate Edition of Red Dead Redemption 2. On November 28, those who played the game on its first day of release will be able to play, and the larger groups will get access on November 29 and November 30.

I gave it a whirl this morning and posted a video on YouTube of the opening scene. You can tell that Rockstar introduces you to the Wild West world in the same cinematic style that it begins the single-player game.

That single-player version, Red Dead Redemption 2, has been a huge hit since it came out on October 26 for PlayStation 4 and Xbox One. The game has already become the No. 2 best-selling game in the U.S. of the year.

Grand Theft Auto Online, the multiplayer component of Grand Theft Auto V, has been a giant hit for Rockstar Games and its parent Take-Two Interactive Software for the past five years. Red Dead Online has similar potential, as players will be able to spend real money on virtual items.

In Red Dead Online, you start out as a prisoner. You create your look and then go to work in the prison yard. The guards tap you for a work detail, and, once you are out in the wild, a trio of outlaws surprise the guards and take you with them. You’re taken to a camp, where a rich woman, Jessica LeClerk, says she wants to hire you to avenge the death of her husband. She shows photos of four people who might have done the deed, and she tasks you to find them.

In Red Dead Online, you can create your own small camp and create an online gang of up to seven human players. The video captures the beginning sequence of the beta. I stopped where I did because the game crashed there. 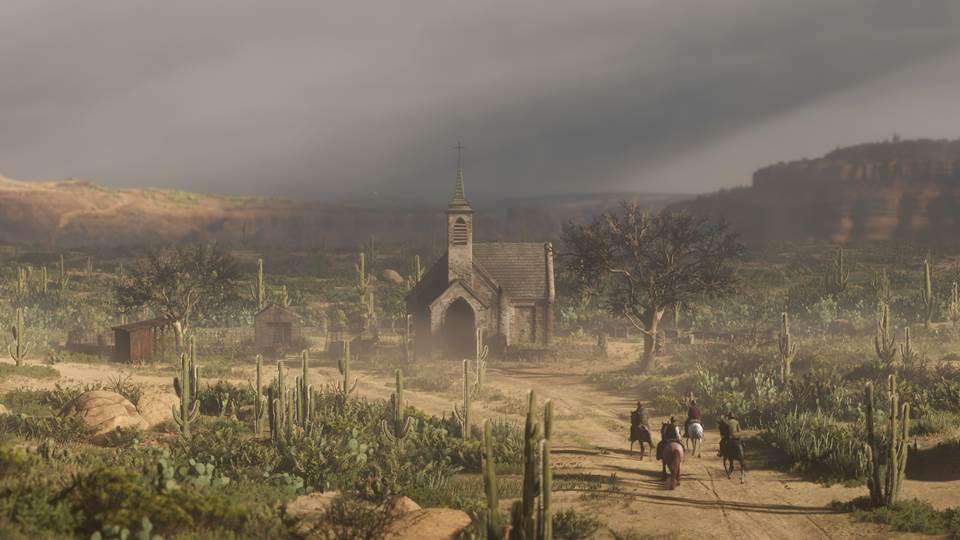 Rockstar said it will make additions and updates during the beta period. This week, you can ride with friends in a posse, set up your camp, embark on cooperative story-based missions, go head-to-head in competitive series, find strangers throughout the world to help (or hurt), tackle spontaneous free roam challenges, go hunting, go fishing, bond with your horse, and explore with friends or on your own.

You’ll accumulate experience points through your explorations and encounters that count towards your rank and provide added bonuses. You can unlock items and improve your attributes while you progress. You can also take on award challenges throughout your open-world experiences to earn awards in 12 categories like combat, hunting, sharpshooter, and survivalist.

In Red Dead Online, your honor will shift high and low based on your decisions and behavior. You’ll shape your honor through your choices, such as life or death decisions and natural interactions such as caring for your horse.

In addition to the world responding to you in subtly different ways, you’ll also notice the nature of certain missions will reveal themselves to you based on your current honor state.

The free roam missions can vary based on how noble or nefarious you are. For example, an honorable gunslinger may be asked to help escort a convoy, defending it from attacking gangs or even other players’ posses, whereas a dishonorable outlaw may be asked to help spring a felon from the law.

I named my horse Bobo and then went on a horse rustling mission with three other human players.

The beta includes five new modes at launch that are part of a larger series of showdowns, and you can also enter your steed into races including point-to-point, lap, and open races strewn across the map. The modes include shootout, team shootout, make it count (only bows and knives), most wanted, hostile territory (battle for control of land), and name your weapon (free-for-all with points based on the weapon you use for the kill).

For help or feedback, Rockstar will direct you to https://support.rockstargames.com. Rockstar notes that some in-game menus are not yet accessible, such as the Red Dead Online in-game store. You’ll eventually be able to buy cosmetic items to change the decor of your camp or character.