Red Hot Labs is announcing its Toro tool today so that it can make it much easier for mobile app and game developers to buy ads on Facebook. The startup says it can cut the cost of acquiring a mobile user by 40 percent. That’s not bad, coming from the team that created Zynga’s FarmVille game.

Facebook has proven to be very effective at acquiring targeted users who are very likely to install an advertised mobile app, since it can sift through its user data to find the people who are most likely to be receptive to an ad for Clash of Clans or Words With Friends. The market for Facebook mobile advertising is growing fast, with companies spending 50 percent to 75 percent of their mobile ad budget on Facebook — which is why Facebook reported a 41 percent increase in mobile ad revenue in its most recent quarter.

But it often takes hours for user acquisition specialists, who have to sift through mounds of data, to schedule ad campaigns on Facebook. It’s a jungle of bidding and targeting options, measurement pitfalls, and changing best practices. Toro is a performance marketing tool whose purpose is to cut the time and expertise required dramatically, said Amitt Mahajan, cofounder and chief executive of Red Hot Labs, in an interview with GamesBeat.

It sets up targeting, split-tests the creative ads to figure out which is most effective, and optimizes between best-performing campaigns. Red Hot Labs says its tool can be set up in just 10 minutes, without making any changes to the code for an app. Thirty game and app companies — Bee Cave, Betable, Sosh, Burner, and Quixey among them — are using Toro.

Companies can launch a campaign from a web browser in five minutes and create hundreds of intelligently split-tested campaigns with a single click. It rebalances a budget on the fly. So a developer will set a budget for how much they want to spend on ads in a day, and Toro will figure out the best way to spend that money. It will track everything in a dashboard so that you can see how well the ads perform. The tool includes post-install metrics such as return-on-investment and lifetime value (the amount of money you get from a user over the life of app usage).

San Francisco-based Red Hot Labs created Toro as part of an effort to promote its own games. But Mahajan said the team decided that Toro was a better product than the games, so it decided to switch its focus. 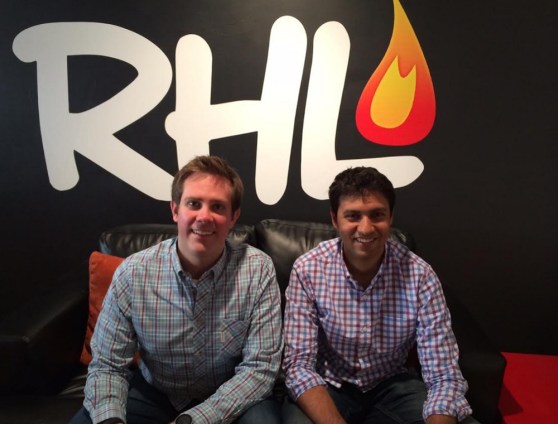 Above: Joel Poloney and Amitt Mahajan of Red Hot Labs

“We realized that the tool was more valuable. We saw the problems around mobile user acquisition, and there was no tool focused on mobile app developers,” Mahajan said. With Toro, we can do hundreds of campaigns and figure out what works. Say you have a game in five countries, and you want to target male Clash of Clans players in the U.S. on iOS or females in another country. We can do these campaigns easily, adjust the bidding and budgeting of the campaigns. Normally, it would take a person hours to manage hundreds of campaigns.”

Bee Cave Games, a social mobile game developer, has seen a 27 percent reduction in the cost per install (CPI, or the cost of acquiring a user) and has saved 90 hours a month in development time with Toro. Burner has lowered its CPI by 32 percent and miDrive, a United Kingdom developer that connects driving instructors to education resources, has seen an 11 times increase in mobile installs and a 73 percent fall in CPI.

Red Hot Labs is working with mobile measurement companies such as Adjust.com to get access to the right data. Mahajan said the fees are also lower than competing offerings on the market, such as Facebook’s own tools like Facebook Ad Manager and Facebook Native Tools.

“We found that there should be a layer on top of those tools to help manage the process,” Mahajan said.

Red Hot Labs has a usage-based fee model, charging for about 5 percent of marketing spend after a certain threshold.

“Toro has been an invaluable asset as we grow our audience across mobile,” said Vivek Patel, co-founder of Sosh, in a statement. “To drive mobile app installs, we needed a product developed by growth experts who understand the intricacies and quirks of mobile app installs. In Toro, we found a product that is fast, insanely simple to use and yet powerful enough to give us all the metrics we need to drive mobile performance campaigns.”

Red Hot Labs has raised $1.5 million in funding from Andreessen Horowitz, Greylock Partners, SV Angel, General Catalyst, Japan’s IT-Farm, and private individuals. The founding team includes Mahajan and Joel Poloney, who were part of the MyMiniLife team, which Zynga acquired in 2009 and used to create its FarmVille game, which turned into a Facebook gaming blockbuster with as many as 83 million monthly active users.

Toro Intro from Toro on Vimeo.