With the news that Reddit just closed a new $50 million funding round, lots of people are asking what this means for the popular community-sharing site.

Since launching in 2005, Reddit has proven that it and its community has staying power. It’s also demonstrated that it won’t sacrifice or anger that community for the profit’s sake. But what Reddit hasn’t had, until now, is the money to transform into a viable business alongside the likes of Facebook, Google, and Twitter.

CEO Yishan Wong, however, attempted to put things into perspective — as well as assure those diehard Reddit users that the $50 million in the bank won’t change the site’s core values. He’s so confident that he’s putting his own money into it; Wong is among the handful of entrepreneurs that participated in the large funding round.

“I decided it was necessary to participate myself to show that I believe in the company and what we’re doing,” Wong told VentureBeat today via e-mail. Additionally, he agreed to answer some bigger questions about the investment.

VentureBeat: Why raise new funding now? Why not two or three years ago?

Yishan Wong: We actually did back then; it was just quiet and no one seemed to care. You don’t want to raise money until a company can invest it properly, and we are at that state now.

VentureBeat: What was compelling about the crop of entrepreneurs also participating in the round? Specifically, Yishan, why did you feel compelled to drop money into this round?

Wong: We looked for investors and entrepreneurs who understood Reddit and our philosophy and aims. I decided it was necessary to participate myself to show that I believe in the company and what we’re doing.

VentureBeat: What would you say to the people who claim Reddit is “selling out” by taking new investment?

Wong: When you take investment, you don’t (can’t) just ride off into the sunset with the money. It’s not the same as selling your business and taking a payout. It’s an investment, intended to be used to make the site better and more useful for all the users, which is our plan.

VentureBeat: Can you give me a bit more of an explanation about the “10 percent of shares back to the community” plan? Who will own those shares? A collection of individuals? Has this been done before by other companies? How much, percentage-wise, will the community’s stake in Reddit be? 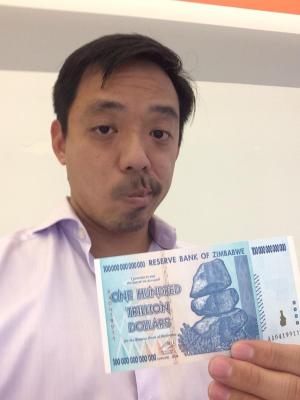 Above: Reddit CEO Yishan Wong holding up a gift from investor and YC president Sam Altman.

Wong: We’re working through the details. We don’t believe any other company has done this before.​

VentureBeat: How would you respond to criticism that Reddit only spoke up about banning “The Fappening” because it was so close to announcing the new funding round? Certainly Reddit has dealt with uncomfortable issues like this plenty of times in the past, such as the banning of the subreddits Creepshots, Jailbait, and the moderator that was managing both. Why do you think this time was different? Or was it?

Wong: Well, the two just aren’t related. Fundraising cycles are much longer than nude celebrity-photo cycles, and the two happened to overlap. We handled the two independently, just like we made statements around other events. If anything, I spoke with our investors before doing the final term sheet signing and told them “Hey, this thing is going on, and we are going to handle it the way we always handle things. Here’s a chance to back out if you want,” and they all stayed in. It was a nice chance to make sure they were really on board with how we do things.

If there’s any confusion: [Reddit] did not shut down /r/TheFappening due to content linking to nude celebrity photos. The subreddit was shut down because users were reposting content already taken down due to valid DMCA requests, and because spammers began posting links to the images hosted on their own pay-per-click sites, or sites intended to spread malware. Both activities violate our rules and we took down the subreddit for those reasons only. Similar subreddits created immediately afterwards were also removed for similar reasons, some were created by the spammers themselves.

We understand that this was confusing because our clarification around this stance was posted at around the same time that activity in the subreddit began to violate the rules we’ve detailed here (and thus triggering a shutdown), so we hope this makes things clear.

Wong: Sites involving very large numbers of users end up being very complex, so there are waves of good PR and bad PR, affected by a lot of micro events in unpredictable ways. I experienced this at Facebook, and it sort of comes and goes. We just focus on making the site good for users, because that’s the underlying reality.