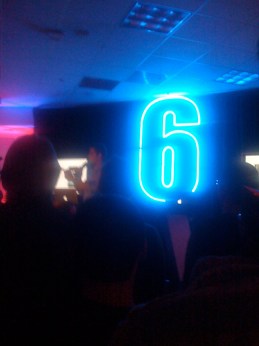 Facebook rolled out a new redesign to 80 million users tonight at its 6th birthday party, and the company’s vice president of product just prepped employees for potential negative reactions by telling the story of the original news feed launch.

After the new features went live, the company showed off streams of real-time reactions to the redesign on screens around the company cafeteria.

But Cox told Facebook employees not to worry too much about negative reactions, as he recalled the original controversial news feed launch:

“We thought — everybody is going to love this thing. It’s going to be awesome.

So we showed up one night and got the news feed ready. Back then, you just pushed a button. I think it literally said ‘Ship it.’ And the feedback started coming in. [Laughter]

It was absolutely terrible. I think we sat there for an hour and had 10,000 users writing in. Only one of them liked it.

Then we were called by security: we had to leave through the back fire escape because security told us that a protest group was assembling in front of the Facebook office. It was midnight on a Monday night.”

Facebook has consistently rolled out changes several times a year to its now 400 million users. CEO Mark Zuckerberg said he aimed to launch something significant once a month.

“Users do develop this kind of trust — even though they can be rattled from time to time — that generally things will be better, even if they don’t understand it immediately,” he said.