A new site called RedGage is opening up today to bloggers, photographers, and videomakers, saying it can help them make money from the content they create. The Hollywood, Fla.-based startup pulls in a user’s activity from sites like Blogger, Flickr, and YouTube, throws up advertising (chosen from various ad networks) alongside it, and then shares the revenue with the user, in the form of a Visa debit card whose account gets automatically replenished with your earnings.

Now, I have several reservations about both the concept and the execution, but I also found the site’s apparent transparency compelling. Not only does it show you how often each blog post or video has been viewed, it also shows you how much money it’s earned, both directly from advertising and as a bonus from RedGage. (Chief executive Daniel Redlich says the payments aren’t just determined by page views, but also by factors like level of activity and influence.) 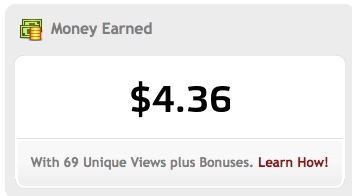 And what does that transparency reveal? Well, no one seems to be making fantastic amounts of cash. During a quick tour through the “featured” pages of the site’s six sections — All Content, Blogs, Photos, Videos, Documents, Links — I was hard-pressed to find any content that earned more than $1 from advertising, and 1-cent earnings were common. (The bonuses tended to be more lucrative.)

So that transparency explains RedGage’s novelty value for a visitor (namely, me), but not its value to a content creator, especially when it’s possible to put advertising on your own site or blog. Redlich says there are several advantages. For one thing, many of the services that RedGage pulls content from don’t allow you to make money directly from the site — Flickr, for example. For another, working through RedGage means you don’t have to worry about developing the financial infrastructure on your own. Lastly, RedGage creates a single location for all your activity on the web — becoming, to use Redlich’s analogy, a FriendFeed that also makes you money.

Still, I’m not convinced RedGage is going to be a hit. For visitors, once the initial novelty wears off, the RedGage site isn’t much fun to navigate. It isn’t terrible, exactly, but it lacks important features like the ability to browse by topic. And if the same content is available on other sites, sites that often have a much better user interface, why would I bother visiting RedGage? This ties into my bigger concern, which is that RedGage seems to emphasize the money side over everything else — and I mean that literally; the largest font on a blog post, for example, is reserved for the money earned. Cash is a nice motivator, but I don’t think it’s the primary reason most people blog, or post videos on YouTube, or post photos on Flickr. And if you’re going to be so money-driven, it would be nice to make more than a few dollars per post.

RedGage is funded by angel investors for now and may try to raise venture funding later this year, Redlich says. To be fair, the company is apparently developing other money-making tools. Redlich also notes that the site has only let a limited number of users (about 500) upload content so far and hasn’t done any serious promotion until today, so those earnings may go up. And hey, if they don’t, the RedGage site will let you know.