There’s still a gap between the Match.coms of the world and the Facebooks, says Redux CEO Darian Sharazi, and he thinks his company’s new site can fill it.

While social networking sites like Facebook connect you with existing friends, and dating sites are narrowly focused on romance, Redux is the first “people discovery” service, says Sharazi, an early Facebook employee — in other words, a site that can help you find friends based on your tastes and temperament. Like a dating site, Redux tries to find people you’d be interested in, but it uses the search in a broadly social context, not an amorous one.

The need for such a site is clear, says Sharazi, since there are already people trying to use Facebook for similar ends. “Whenever someone’s trying to circumvent the way a site should actually be used, that means there’s a big market there,” he says.

Younger people, especially, want to search for people that they’re likely to make friends with. Sharazi and his cofounders have come up with an alogrithm they think will do that. It’s not the first company to try to match people based on compatibility. However, of the companies we can think of that take a similar approach, none are identical. For example, we’ve reported on eHarmony, Ourlikes and Flirtable, but those focus on romance, not friendship.

Redux’s “relevancy” algorithm seems to take a broader approach. The company says it’s not a simple “Who likes the things you like?” match-up, but rather a complex algorithm based on a number of factors, including, yes, your interests, but also how you rate others’ interests and how you answer innocuous yes-or-no questions like “Do you cry at movies?” that occasionally pop up at the bottom of the screen.

The company might be on to something. I know plenty of twentysomething, post-college friends eager to expand beyond their old social circles from school and their new circles at work, but uncertain as to how. So if Redux does what it says, it could fill a real need. The test, of course, is in the execution. I also know plenty of people dying for dates, but that doesn’t mean they’ve all joined Match.com.

The company’s launched a private beta, which I played around with this morning. As with similar sites, the first thing you have to do is fill out a profile with biographical details, interests and your geographic location. (See screenshot below.) It’s familiar and easy, although I was a little surprised they didn’t have room for professional or educational data. Yes, that sounds deathly boring, but it’s also relevant. Some of the beta users try to sneak it in by listing “entrepreneurship” as something they do for fun. 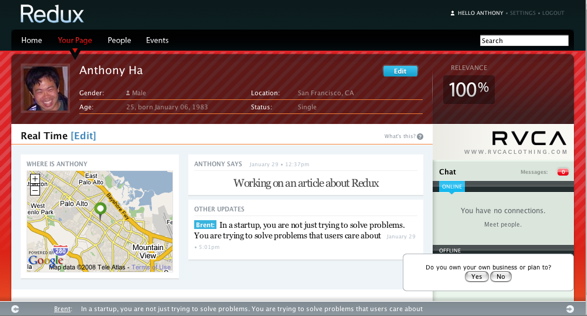 You can also enter your Myers Briggs Type Indicator, which describes your personality. Redux says it’s the only company that MBTI publisher CPP has allowed to use the indicator so far. The site lets you choose your personality or determine it through a test. I’m guessing most people will enter their personality type manually, rather than fork over $35 for the test.

To be honest, the site didn’t recommend anyone who struck me as a perfect match. It’s not surprising that the site’s beta users are a bit limited, but that does make it hard to tell if the algorithm is effective. At least Redux doesn’t claim to introduce me to a new bosom buddy — the user “most relevant” to me only has a “relevance index” of 61 percent. (Not surprising, since I don’t think entrepreneurship is fun. No offense, entrepreneurs!)

Redux also features “entourages”, which are similar to Facebook groups, but with a more limited membership. Using a list of related events, entourages can plan activities together. (see screenshot of the “DEMO 08″ entourage below.) 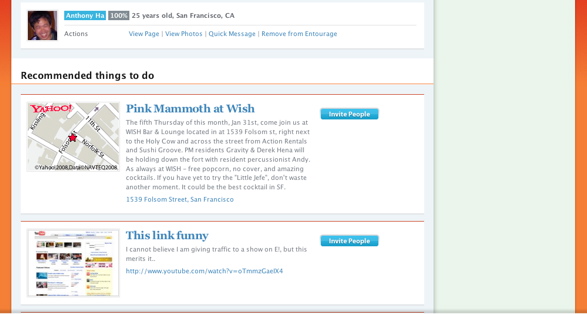 “These are the people you roll with, to put it in layman’s terms,” Sharazi says.

In March 2007, the Berkeley-based company raised $1.65 million for its first round of funding. There were some big-name investors, including PayPal co-founder Peter Thiel. VentureBeat first reported on the company’s funding when it went under a different name, Next3.

Redux should launch in San Francisco and Los Angeles later this quarter, with more locations added throughout 2008, Sharazi says.

If the service is a hit, the long-term goal is to start introduce widgets across the Web that will allow similar people to have conversations about items of interest found online.